Following recent advances in Hama province, the regime is conducting repairs to the Khan Sheikhoun-Qalaat Madaiq highway and preparing to open the Morek crossing writes Al-Modon. 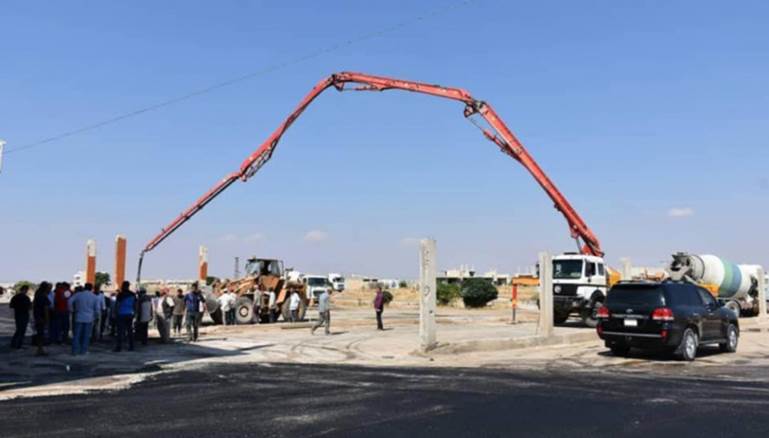 Coinciding with the tripartite summit between the Astana guarantors on Monday, the regime continued preparations to open the Morek crossing north of Hama, despite it being located inside regime territory, 15 km from the furthest opposition point. At the same time, it is continuing repairs to the Khan Sheikhoun-Qalaat Madaiq highway to the Syrian coast, as an alternative for the M5 highway, according to Al-Modon’s correspondent, Mahmoud al-Shimali.

A source told Al-Modon that the crossing had commercially linked the opposition and regime areas before the regime invaded the northern Hama countryside. It is located 4 km south of the city of Morek, between the city of Morek and Suran. Swift renovations and repairs are under way. The crossing is now more than 15 km deep into regime territory from the city of Khan Sheikhoun in the north. This has caused surprise, as the crossing is no longer a border area with the opposition, and so is no longer a crossing available to them.

The militias could have set up a new crossing in Khan Sheikhoun rather than Morek. But it appears that unknown arrangements have prevented that. This could indicate that there is a Turkish-Russian agreement that neutralizes Morek and Khan Sheikhoun from the direct control of the regime’s militias, especially after Russian forces moved the militias outside Morek and focused their deployment near the Turkish observation point. Previously, there has been discussions about the possibility of turning Khan Sheikhoun into a center for Idleb province under joint Russian-Turkish supervision.

The journalist Omar Hajj Ahmed told Al-Modon that the operation is no more than a formal application of some items of the Sochi agreement. Those items included the opening of land crossings along the Damascus-Aleppo highway in preparation for the opening of the M4 and M5 highways. The Russian militias want to implement the deal, despite imposing a fait accompli on the Turkish guarantor with its recent land advances.

It is clear that the preparation of the crossing is being done to make it a commercial crossing as it had previously been. Renovation work includes buildings and storehouses and paving a relatively large segment to link it to the highway, according to Al-Modon’s sources.

In contrast, Turkish forces in Maar Hatat south of Idleb have not moved and are working to fortify their position and are continuously receiving reinforcements, the latest of which was the arrival of a military convoy of 30 vehicles, including military vehicles routinely used by Turkey for its patrols in Idleb.

The regime’s services administration agency in Hama province is also continuing its repairs of the Khan Sheikhoun-Qalaat Madaiq road, especially between the towns of al-Habeet and Kafr Naboudeh. It is urgently being repaired. Video footage has been seen of the road being repaired with non-traditional road paving techniques.

This road is strategically important, because it connects the Aleppo-Damascus M4 international highway with the Syrian coast, running from Khan Sheikhoun to Qalaat al-Madaiq, al-Suqaylabiyah up to the Beit Yashout road and from there to Lattakia. This importance increases in light of the Damascus-Aleppo highway being opened in accordance with the Sochi decisions, especially after regime militias were able to secure its surroundings entirely.

It is expected that this road will be used as an alternative to the Lattakia-Aleppo M5 road because of the difficulty of using that road in the near future—especially after the end of military operations and the possibility of a new agreement to stabilize the ceasefire for a particular period at the guarantor’s conference being held in Turkey.