While children in regime areas go to the first school day of the new academic year, children in opposition held areas have to wait because of the bombardments writes Brocar Press. 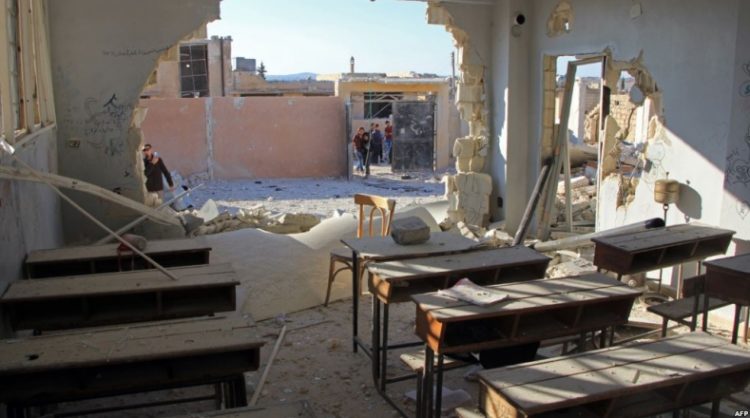 Students in areas under regime control went to their first school day, while bombardments and the deteriorating study conditions in opposition areas has prevented hundreds of thousands of students from going back to school until the 21st of the month.

The Education Directorate in Idleb province issued a general circular about the dates for the beginning of the school year in the directorate’s Idleb area.

According to the school circular, the students’ classes will begin on Sept. 21, 2019, in all schools and for different study levels, while administrative work and educational faculty staff will start on Sept. 14, 2019.

The Director of the Information Department in the Education Directorate, Mustafa Hajj Ali, said in a statement to Brocar Press that, “the directorate has prepared an emergency response plan for displaced students from the escalation zones in southern and eastern Idleb by receiving them in the educational compounds in the areas to where they were displaced.”

Hajj Ali said that the councils formed by the directorate were tasked with helping students and educational staff coming from the escalation areas, in terms of registration papers for the host compounds in areas where they were displaced to, and receiving faculty in the schools appropriate for them.

The Education Ministry in the regime government sent 3.5 millions students to schools, while there are still more than two million Syrian children who are deprived of their right to education, that is about a third of Syrian children are out of school according to UN statistics.

The Humanitarian Response team said in its latest reports that more than 113 schools and educational centers in northwestern Syria had been hit by strikes, the largest portion of them in Idleb province since the start of the military campaign by the regime and Russia, which will impact the current school year.

There are no precise statistics that reveal the real educational situation in Syria in light of the war, but the United Nations in 2018 said that 145 educational centers had been struck in Syria, the largest number since the start of the crisis in 2011.

The United Nations documented that about 40 percent of the educational infrastructure in Syria was damaged by bombing and fighting.

There were 358 recorded attacks on schools between November 2013 and June 2018, with the attacks increasing in 2019 without any complete statistics so far.