Mohieddin Saho is a blind refugee from Idleb who currently lives in Germany, but due to a change in the rules, is facing deportation reports Zaman Al Wasl. 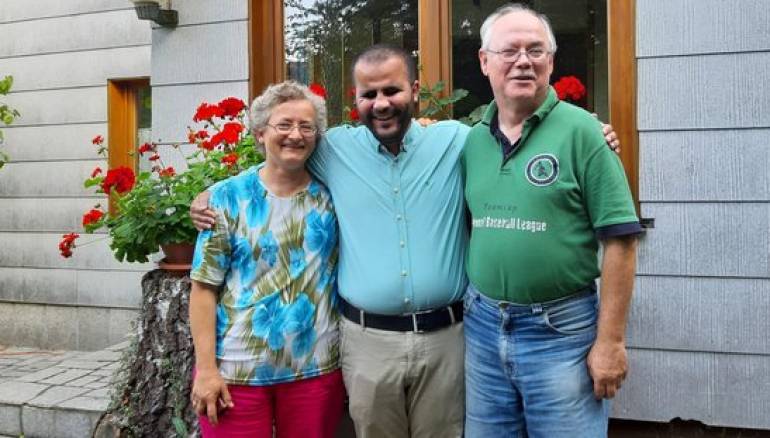 Although Mohieddin Saho lost his sight, he still had the insight to work on a master’s degree in English at Maximilian University in Munich, Germany.

However, his dreams and aspirations clashed with the German asylum laws, because of which he could lose everything and find himself a deported refugee, according to the Dublin Regulation.

The story of Saho started when he left the northern city of Idleb in 2014 for Turkey with the help of a German organization, so that he could complete his university studies in English, defying the conditions of war and asylum and his blindness, according to the German website TAZ.

By July 22, circumstances began to challenge the ambitious young man, when the Bavarian state government in southern Germany decided to activate the Dublin Regulation and deport Saho to Spain, which was the first European country that he entered when he arrived into the EU. This was the first obstacle to Saho’s dreams. He arrived at the airport with German police officers to be deported. But, according to Saho’s report, the panic and fear of the moment of his arrival at the airport prompted the pilot to refuse to board the plane, postponing his deportation until later.

According to the website, Saho’s lawyer, Thomas Oberhauser, questioned the procedures laid down by the European Court of Justice with regards to the residence of persons in need as in the case of his client, pointing out the dangers of these procedures to his physical, psychological and mental health if the deportation takes place in the coming days.

Oberkirchenrat Michael Martin, of the Evangelical Church in Bavaria, asserted that the young man is in urgent need of help: “He does not know anyone in Spain, he will be completely helpless, lonely and unknown,” explaining that he demanded via an email to  the Minister of Interior of Bavaria, Joachim Herrmann, that Saho’s case be taken into account.

Saho graduated from university in January 2019, and after failing to obtain Turkish citizenship at the end of his stay, he came to Germany via Spain, to apply for asylum in the state of Bavaria. However, he was later rejected based on the Dublin Regulation signed by the EU countries.

His story received great sympathy in Germany, where the family hosting him expressed their full support, especially with his determination to overcome his health problems and search for a better future in this country.