One year after the regime took control of the southern province of Daraa, a wary peace is in place, but the region still bears the scars and assassinations are on the rise reports Asharq Al-Awsat. 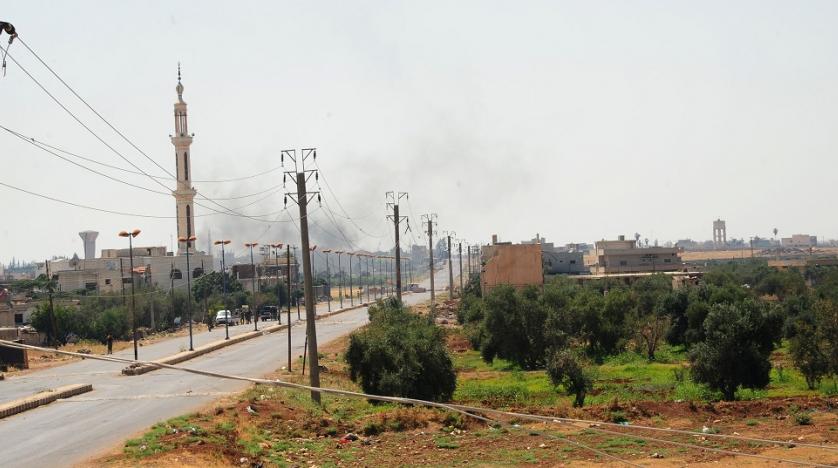 Despite the return of the Syrian regime to southern parts of the country, travelers heading to Daraa cannot hide their fear and concern as they head to the birthplace of the 2011 revolt. Even though the area has been living in relative peace under regime control for the past year, it still holds the scars of war and crime has become rampant.

Travelers from Damascus to Daraa, which is located near the Syrian-Jordanian border, can take one of two roads: the first is called the “old road” and is located east of the capital. It passes through al-Kiswa in the Damascus countryside, reaches the administrative borders of the Daraa countryside and ends at the Nassib border crossing with Jordan. Access to the road was blocked throughout the years it was under the control of armed factions.

The second road is known as the “Damascus – Daraa international highway”. It runs in parallel to the old road. It begins in the Nahr Aisha area, passes through the al-Qadam neighborhood, then Sahnaya, reaches al-Kiswa in the Damascus countryside and reaches the administrative borders of the Daraa countryside.

Most cars headed to Daraa and Jordan opt for the highway given that it is in good condition compared to the old road. Asharq Al-Awsat noted heavy traffic along the stretch from Nahr Aisha until al-Deir Ali in the Daraa countryside after the removal of army and security checkpoints.

Only one checkpoint remains, the “town center”, on the outskirts of Sahnaya. Security members carry out swift inspections of the IDs of travelers in order to arrest fugitives or draft dodgers.

After crossing the checkpoint and entering Sahnaya, traffic tends to dwindle all the way to Deir al-Ali.

Another military checkpoint welcomes travelers as they enter the administrative borders of Daraa province. The military has set up checkpoints at the entrances of every city, town and village.

Given the almost non-existent traffic, drivers tend to drive at very high speeds out of their fear that they may be victims of kidnappings, murder or car theft. These crimes were common before the return of the regime to the province.

In total, the journey from Damascus to Daraa would take around an hour. Before the war, such a journey would have taken up to four hours given the heavy security.

The scenery along the highway has also changed. The landscape along the highway that used to be lined with fruit trees during the pre-war years, is now a wasteland with barren trees and ruined cities and towns, whose residents sided with the revolt.

Daraa city is divided into a western section, called Daraa al-Mahatta, and an eastern section, or the old city, called Daraa al-Balad, where the revolt was born in March 2011. The area fell under the control of armed factions in 2012 and later returned to Damascus’ control after a “settlement agreement” that was forced by a regime offensive.

In a cautious and wary tone, a resident of Daraa al-Mahatta told Asharq Al-Awsat that the situation was “stable”, but he added that people were living in fear over the rising number of murders by unknown assailants.

He recounted how a gunman on motorbike shot dead in broad daylight a man standing in front of his house and fled the scene. People suspect that such murders are driven by revenge over incidents that took place during the war.

Contrary to the lax security measures at checkpoints for those headed to Daraa, the journey back to Damascus is littered with heavy inspections of vehicles and passengers IDs.