Hay’at Tahrir al-Sham and Iranian militias are facilitating the smuggling and selling of drugs across Syria, leaving many addicted to the harmful substances writes Ana Insan. 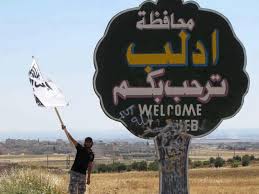 With the increasing pace of the Syrian war, and the political, military and economic pressures to which Idleb is being subjected, dangerous customs have recently spread their shadow over northern Syria, such as drugs. In the areas where the Syrian opposition is in control, many types of hashish, opium, heroin, captagon and hallucinogenic pills have spread.

Young men are most prone to falling into the trap of addiction, because of the deprivation most are experiencing and the rarity of work opportunities. Some of them think that they have found solace in taking drugs, and through that they become victim to a dirty game played by the regime and its Iranian militias on one hand, and some immoral people and social climbers on the other. Most of these drugs enter into opposition areas by a number of ways, from regime areas and areas under the control of Iranian militias and Hezbollah in particular. The drugs cross into the eastern Aleppo countryside and the southern Idleb countryside and some coastal areas.

According to an informed source who declined to be named, “drugs are entering all opposition areas by way of two basic points—one of them through the Murak crossing through some figures in Iranian militias and the National Defense, who hand them over to smugglers in touch with the opposition. The crossing price for a car smuggling drugs is over 10,000 dollars. The Murak point is controlled by Hay’at Tahrir al-Sham, which is responsible for everything that goes in and out of this crossing. The second point is in southern Aleppo, specifically the al-Ais crossing, where Hezbollah and Iranian militias smuggle captagon pills, and where inspection is overlooked when they enter into opposition-controlled areas, to reach people who hide their real identities and then try to distribute them in secret among school and university students by way of secret cells that distribute these substances. They also target bhcv badolescents and young men.

The source said that these areas are not the only ones in which drugs are distributed, but they also extend into areas controlled by opposition groups in Afrin and the Euphrates Shield areas and are brought in by Kurdish militias that grow and manufacture these substances in large quantities, and then distribute them in these areas.

Mohamed Abdullah, 25, from the Aleppo countryside, told Ana Insaan about his struggle with addiction, saying: “Because of the harsh living conditions, after I left my studies I looked for work to support myself and my family, but the increasing mental and physical pressure pushed me to take captagon pills, which I thought might bring me peace and forget my life burdens, and keep me away from the bitter situation.” Regarding the method of obtaining these pills, Abdullah adds: “I went to the store near the university and my friend also came with me because of his own addiction, and we would order pills with a secret phrase, which was ‘do you have a painkiller?’ And then we would buy these pills at very high prices, with one sedative pill selling for 3,000 Syrian pounds, a kilo of hashish, according to quality, at 200,000 pounds, and a captagon pill at 60,000 pounds.”

A free police officer in the city of Maarat Nouman told Ana Insaan: “In the last few weeks, we seized large quantities of drugs in Maarat Nouman and the neighboring areas, with the number of users rising steeply in light of the difficult conditions in the area. All of this has led to a steady flow of drugs into liberated areas.” He blamed all the relevant entities in control of these areas, with Maarat Nouman and its western and eastern countryside under the control of Hay’at Tahrir al-Sham’s Salvation Government.

The war in Syria is not limited just to weapons and firearms, but has developed to destroy the minds and ideas of young Syrian men through the regime and its militias easing the entry of these substances into areas outside of their control, leaving clear marks in the minds, destroying their psychological and mental health.