A large number of people in Idleb are feeling it necessary to own weapons to protect themselves, but this is causing a rise in injuries and deaths writes Salon Syria. 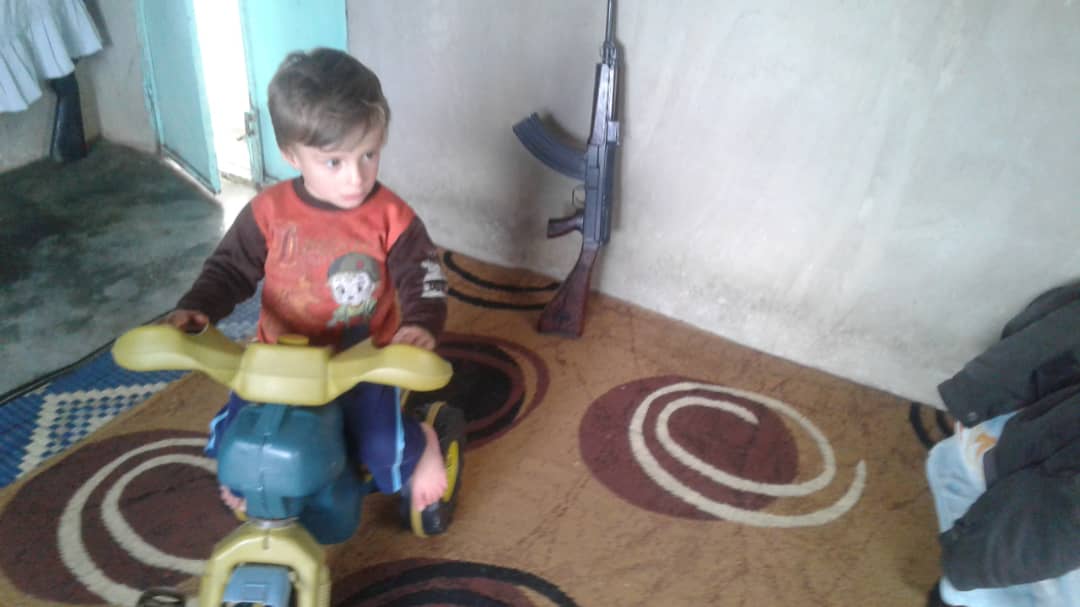 A friend of Wael, 22, asked him to take a picture of him as he held up a Russian rifle. While taking the picture, the weapon suddenly fell from the friend’s hands and went off, firing a bullet into Wael’s chest and claiming his life.

“It was a painful incident which hasn’t left my mind,” says Omar, who did not expect that he would one day kill his close friend, who was due to be married just days later. Since that day, Omar has suffered from heavy depression. His family was also forced to pay three million Syrian pounds to Wael’s family in compensation.

Many homes in Idleb city have obtained light and medium weapons for security and precaution, due to the deteriorating security situation over past several years and have kept them in a state of permanent readiness. But buying guns for personal protection has caused a number of painful incidents.

Fatima al-Qassem, 23, had her life destroyed as a result of being struck by a bullet shot by her husband during a dispute with his relatives. The bullet from his rifle, which he fired by accident, landed in Fatima’s chest and completely paralyzed her.

Recounting the story of what happened to her, Fatima says: “My husband often brandished his weapon in any confrontation he faced, and I’d long warned him that one day he would kill someone accidentally with this behaviors. But I didn’t expect that I’d be the first victim.” After paralyzing Fatima, he went on to divorce her to avoid the expense of treating and caring for her.

Stores that sell and repair various personal weapons have proliferated in opposition-controlled areas in the north, which secure for their customers everything they want in terms of weapons, equipment or military clothes with great ease and no controls.

Ahmed al-Abd, 40, a weapons dealer and owner of a store, explains this phenomenon by saying: “We are in a state of war. Weapons are necessary—if not to fight the repressive regime, then for personal defense against kidnapping and theft.” He adds: “I opened this store given people’s demand for weapons at the current time. At the same time, it is a trade that creates a good profit.” With regard to the deaths and injuries caused by the proliferation of weapons, he believe that this happens accidentally and is not his responsibility, but the responsibility of those who own the weapons, but are unaware of how to use them or how dangerous they are for their children and people around them.

Bilal, 18, is one of the young people who carries a weapon on the pretext of being in a rebel group, but also as a show of strength to his friends and the people around him. Bilal was recently arrested by security agencies after shooting at one of them, seriously wounding one.

Abou Mohamed, 38, a resident of the region, says this is very dangerous as, “these young foolish people do not hesitate to show off their weapons, even for unknown reasons.” Abou Mohamed blamed rebel commanders and security agencies in the area for not being able to control the spread of weapons or prevent violations and the terrifying behaviors that are occurring.

Abou Mohamed asks, “Isn’t it enough that Syrian citizens could be killed at any moment by regime warplanes? Now they also could be killed intentionally or by accident by the many unscrupulous people carrying weapons in the area.”

Abou al-Abbas, 31, a commander of a rebel group, said that they were not able to prevent citizens from carrying arms to protect themselves, and said: “We often find the bodies of victims of thefts and assassinations here and there, and therefore normal citizens are concerned with protecting themselves against any possible danger they face.” Abbas says that there are security personnel to control this type of crime, but that killings and revenge attacks take place in secret in unpopulated areas, and so everyone needs to carry arms as long as “we are in a state of war and chaos,” he says.

Many residents of the Idleb countryside have demanded an end to the proliferation of weapons among civilians out of fear of intentional or accidental injury during the many fights that break out in public places.

In order to confront the phenomenon and with the lack of intervention by rebel groups to end it, activists have launched the campaign “No to Weapons Among Civilians,” to stress the danger of arms proliferation among residents. The campaign has included posters and awareness pamphlets distributed in schools, medical centers, mosques, public parks, markets and residential areas.