The US Special Representative for Syria, James Jeffrey, has said that Iran's presence in Syria threaten neighboring countries like Israel and creating an unstable atmosphere writes Asharq al-Awsat. 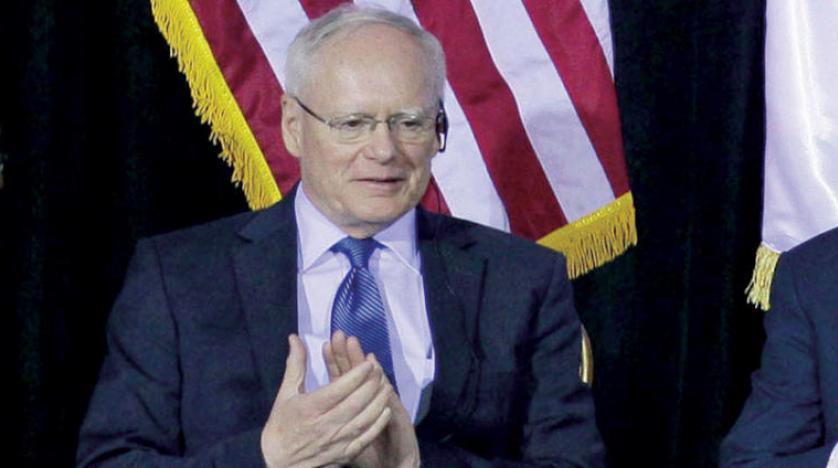 James Jeffrey, the US Special Representative for Syria Engagement and the Special Envoy for the Global Coalition to Defeat ISIS, said that his country wanted a full Iranian withdrawal from Syria and would not allow Iran to “fill the void” in the northeast of the country.

In an interview with Asharq Al-Awsat, Jeffrey said Washington would continue to pressure Damascus and its allies through economic sanctions, a military presence in northeastern Syria and a halt to Arab and Western normalization until a “new political government is formed.”

“We will continue to find different ways to pressure [Syria] until the regime decides to cooperate on the political process,” he said. “The solution is political; not military.”

Asked about Washington’s position towards the current escalation in Idlib, he said that the US administration was against such escalation.

He stressed that US President Donald Trump had stated in September that a comprehensive attack on Idlib would constitute a reckless act, not only out of concern over the possible use of chemical weapons, but also because it would lead to a flow of refugees and displaced.

He noted that the US administration was using political, economic and military tools to deter dangers that might emerge from the Syrian conflict.

In this regard, he pointed to the continued US military presence to fight ISIS in northeast Syria and to prevent the filling of the vacuum by other parties, in addition to the US support of the Israeli campaign against the Iranian hegemony in the country.

Jeffrey went on to say that the Syrian regime’s access to reconstruction funds has stopped, adding that his country was obstructing the recognition of the regime in the Arab League and was working on a coordinated sanctions program with the Europeans.

The US envoy refrained from giving details on the “security zone” currently studied by the US and Turkey, but only said that the zone would extend along the Turkish-Syrian borders east of the Euphrates.

“We have not yet agreed on the depth of the area… We are still talking about how we will provide security and Turkish and American presence in the region. These are things we are negotiating and we have made a lot of progress and we want to achieve more,” he said.

Back to Iran, Asharq Al-Awsat asked Jeffrey about the recent deployment of the USS Abraham Lincoln aircraft carrier in the region and whether the military escalation was serious. He explained that US data from the White House, the Defense Department, and Minister Mike Pompeo were clear about the situation with Iran and the deployment of US naval power.

“We came because we found serious signs of Iranian threats. So we have to take it seriously about the American position,” he underlined.

He went on to say that the American deployment had different missions and objectives, including the fight against ISIS, containment of Iran, and other military missions that might be decided by the US president.

Jeffrey emphasized that Iran was active in the region and the US policy was aimed at facing Iran in Syria, Iraq, Lebanon, Hezbollah, and Yemen.

“This is no secret. We look at all these areas as one theater of [Iranian] operations,” he said.

Commenting on the Israeli strikes in Syria, the US envoy said his country wanted the presence of the foreign forces to return to what it was before 2011, and a new Syrian government to be formed with different behavior.

He stressed that Iranian forces were among the forces that must withdraw from Syria, especially as they threatened neighboring countries like Israel and contributed to instability in Syria.

“We want all troops to withdraw,” he stated.

On the US position towards Syrian regime President Bashar al-Assad, Jeffrey said that his country did not have a policy of regime change for Assad, but was committed to UN Security Council Resolution 2254, which provided for changes in the Constitution, UN-sponsored elections and change in the governance.