Recent outbreaks of violence on the Lattakia countryside front has lead to the deaths of a number of fighters who had previously signed up to reconciliation agreements writes Al-Modon. 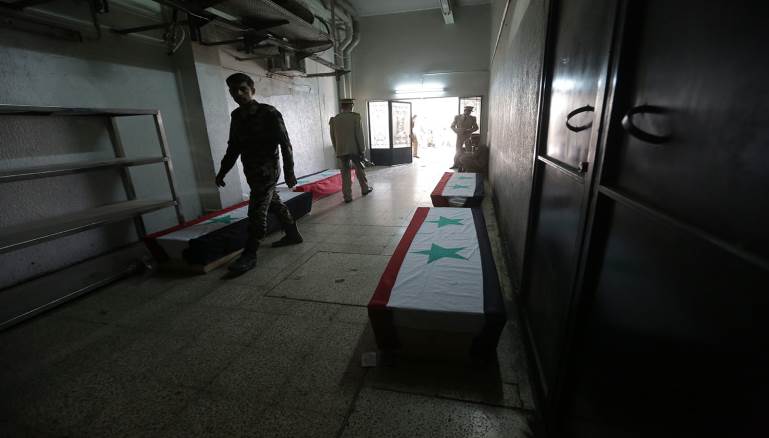 A number of reconciliation groups from the Damascus countryside entered into a direct confrontation with the opposition on the Lattakia countryside front two days ago, with eight killed. The group is from the western Damascus Ghouta, loyal to a local militia known as “Zakia and al-Bakkara,” and are directly under the commander of the Fourth Division, according to Al-Modon’s correspondent Ahmed al-Shami.

A military source told Al-Modon that a number of dead who fell in regime ranks during the battle on the Lattakia countryside front were former opposition members from Damascus and its countryside who had undergone “settlements” of their status with the regime after the opposition was evacuated to the north. A source told Al-Modon that the names of the dead from the “reconciliation groups” had leaked to the media, probably through their families, as the official media has avoided mentioning them, focusing on the dead among the officers and volunteers in the regime forces.

“Reconciliation” on the Latakia Fronts

The Samir Rihal Martyr Brigade was founded by Hezbollah three years ago in the town of Qara in Qalamoun. There are no figures of the number of volunteers in it, but the numbers that have circulated among residents indicate they have more than 1,000 young men in their ranks from Qara, Flitah, Jarajir and Yabroud. Volunteers receive their salaries and armaments directly from Hezbollah. In response to a request from Hezbollah, the Brigade recently sent a large number of its fighters to the villages of Selma, Kinsabba, and Tellet Abu Saad, on the Lattakia countryside front. Al-Modon’s sources said that four people had died and more than seven were wounded since the start of military operations on the Lattakia countryside front.

The Bakh’a and Fleitta Group, whose fighters are estimated in the dozens, was founded by Hezbollah three years ago. It sent fighters to the north along with the mobilization of the Samir Rihal Martyr Brigade, and is participating with them on the fronts.

The Zakia and al-Bakkara group includes more than 130 fighters from the western Ghouta, according to the Sowt al-Asima (Voice of the Capital) network, and are part of the Fourth Division. They were sent to the Lattakia countryside at the start of May and are stationed in the town of Selma. There are also fighters from them in Qalaat al-Shalaf and the al-Marasid area, along with volunteers from the town of al-Kasweh in the Fourth Division, and they number more than 200 fighters.

The Zabadani Area group includes more than 300 fighters from the towns of Zabadani, Madaya and the villages of Wadi Baradeh and Bloudan, and are directly under the command of the Fourth Division in the town of al-Dimas. It sent its fighters to the Lattakia countryside in mid-April and they are stationed under the Fourth Division’s supervision in the Telal Kabina and Jabel al-Akrad areas as well as the Jabel Selma villages. Sources close to the group told Al-Modon that there had been a number of wounded in its ranks after mortars fells on their positions launched from opposition positions in Jabel al-Akrad.

Sources close to Hezbollah told Al-Modon, quoting the group, that more than 600 volunteer fighters in its ranks from the cities of the Damascus Countryside had been transferred to the Aleppo countryside. These fighters are currently stationed in joint military positions with regime and Iranian forces in the Handrat camp, al-Nayrab military airbase, and al-Ais.

One of the most prominent military formations from the “reconciliation” groups, which sent its fighters to the Hama countryside, is the al-Haramoun Regiment, which includes volunteers from the towns of Beit Samer, Beit Teemah and Kafr Hour, as well as from the Golan Regiment, which includes volunteers from the villages of Jabel al-Sheikh. al-Haramoun and Golan, and are under the command of the Military Security. Former fighters from the Qalamoun Shield are also fighting under the command of the Fifth Corps and are deployed in al-Hamamiyet, Karim, Atshan, and the Mhardeh base. A source told Al-Modon that two residents of the town of Tel Manin had been killed trying to advance with the regime forces on the Kafr Naboudeh front.