The Assad regime has mobilzed all of its air force to take part in the assault on Idleb, although it is being stretched to capacity writes Zaman Al Wasl. 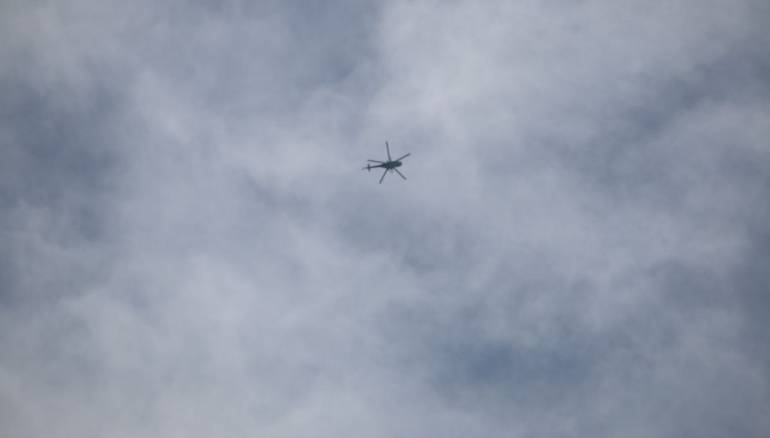 A military source said that on Friday, the Syrian Air Force had lost its first helicopters during the ongoing offensive on Idleb and Hama provinces.

A Mi-17 helicopter of the 59th Brigade was hit by resistance fire last Friday while it dropped barrel bombs on villages in northern Hama, confirming that the helicopter landed west of Hama airbase and was taken out of active service until the damage could be assessed and the possibility of repair was estimated.

On a related note, Zaman al-Wasl was informed by a special source that the regime’s air force is exhausted, participating with its maximum effort with the Russian Air force, departing from Hemeimeem Air Base.

It was revealed that the regime’s participating aircrafts are distributed over several airbases: Seven (Su-24) departing from Tayfur (T4), the main airbase of the 19th squadron, three of them were provided with their crews from the al-Seen Airbase of the 696th squadron a month before the operation.

He explained that there are four Sukhoi Su-22M4 departing from their base in Tayfur of the 827th squadron, pointing out that four Su-22s were from Shayrat Airbase, two Su-33M4s from the formation of the 675th squadron and two Su-22M3s from al-Dumayr Airbase of the 54th squadron.

The source added that there is a MiG23M aircraft launching from Shayrat airbase of the 677th squadron.

He confirmed that 10 aircrafts belonging to the aviation academy, five of them departing from Shayrat and five from al-Nayrab airbase, after an Iranian militia allowed the regime to work from there at the start of air operations against Idleb.

The same source revealed that attack helicopters were assembled west of Hama military airbase believed to be in the area of Jubb Ramlah, a paved area ready for helicopters to land and take off from.

The source explained that all these helicopters operate from the base assigned to them; the workers, pilots and technicians who reside in the Hama military airbase and technical teams for the preparation and equipping of helicopters are transported to Hama airport in the early morning, with cars dedicated for them and vehicles dedicated to the transfer of ammunition and explosive barrels.

The source attributed the helicopters being assembled away from the Hama military airbase to several reasons, the most important of which is that Hama airbase is busy with Russian and Iranian aircrafts, pointing out that the airport has become a headquarter for all air and land operations and a landing site for military aircrafts transporting ammunition to the airport. The other reason, according to the source, is the difficulty of hiding them or protecting them from retaliatory strikes, and the ease of coordination of work between the helicopters and the other types of aircraft participating in the bombing.

Abou al-Duhur airbase, after its restoration, was considered as a reserve station for all types of aircraft and helicopters, in the case of damage or technical failures forcing the plane to land at the nearest airport. The forces of the regime – he says – did not use the airport, despite its availability, because of its proximity to the area of military operations. However, troops of the 4th Division are stationed at the airbase, in addition to a technical team that can receive emergency landing planes.