With the increase in the number of beggars on the street, the government is increasing jail time and imposing fines on those who are caught writes Al-Watan. 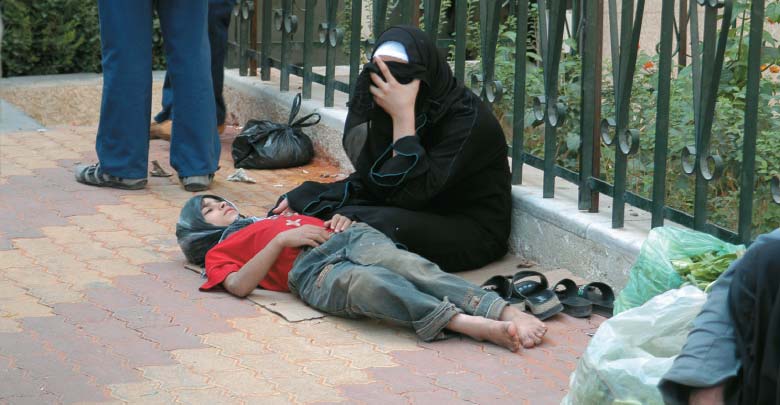 Member of Parliament, Mohamed Khair al-Akkam, announced that a draft law, currently being discussed in the constitutional and legislative committee in Parliament, will see fines imposed on those who beg for money on the streets. He did not specify the size of the fine, since it would vary depending on the circumstances. He said that those who beg for money are trying to collect as much as possible.

Akkam said that begging had become a profession to generate income, and that it appears there are those who employ people solely for this purpose. Adding that they rely on the sympathetic nature of people for the Middle East. “For instance, we find people begging on the side of the road using a child, as a means of getting sympathy from passersby. This is the sort of phenomenon we need to crack down on.”

Akkam added, “If this person sitting on the side of the road with this child needs work, there is the Ministry for Labor and Social Affairs, as well as government associations, which can try to find them work, according to their situation and needs. He said that on this basis the punishments had been strengthened in the new amendment for some items relating begging.

Akkam said that this phenomenon had grown in light of the war to which the country has been subjected, and had become more widespread than it had previously been, and so this amendment had to be added.

Akkram believes that begging is a legal and social issue, and that those who need work, should be helped by the Ministry and relevant associations.

Akkam added, “It is possible that the role of the Ministry or the associations is not sufficient and needs to be increased, because it is the duty of the state take care of the nation’s families and children, as stipulated by the constitution. He said that the Ministry sometimes carries out its duties alongside the Interior Ministry, but that the beggar could return to begging. They found that the punishments in place were not enough to prevent that and so were then strengthened and fines were added.

Akkam said that in this crisis, children had been exploited, especially those who had lost their families as a result of the war. He added that for children, the juvenile law was applied and not laws restricting freedom.

Akkam added that the a child under ten could not have any punishment applied, while any child between 10 and 18 would be sent to a reform shelter, where they would be taught a profession and not viewed as criminals.