A gas shortage in Aleppo has led to a wave of anger among residents and caused the death of two children writes Al-Modon. 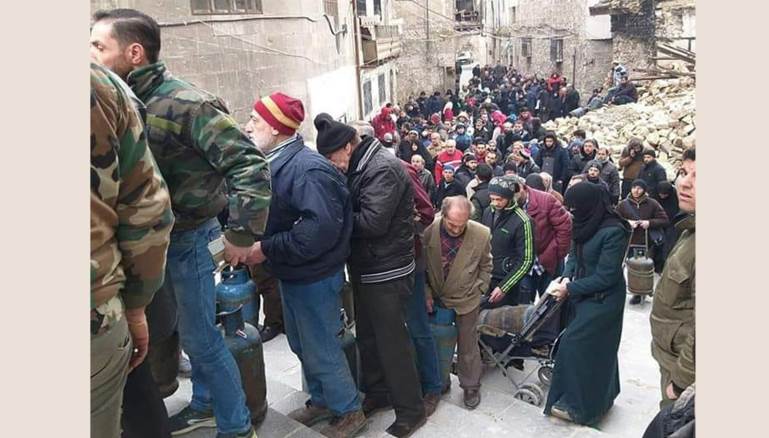 The suffering of residents in the city of Aleppo has extended to securing household gas canisters. The recent bitterly cold weather has pushed thousands to line up at gas distribution centers, according to Al-Modon’s correspondent Khalid al-Khatib.

The cold weather has increased demand for fuels in general, and gas in particular, because it is more readily available compared with other rarer alternatives such as fuel oil and electricity. Regime militias monopolize and control the trade and distribution of fuel oil and gas almost entirely, while the absence of electricity in some areas has continued for days.

Some families in Aleppo have been without gas for 50 days, despite registering their family book with the local government administrator, which is required to secure gas. Widows and divorcees who do not have family books and families who have lost their documents are unable able to register to receive gas.

The gas crisis has increased anger among residents, with some lines for gas extended for more than one district in old Aleppo. Men, women and children have had to line up in the rain.

The governorate says that it confiscated 125 canisters on Wednesday and arrested 11 people for infringements. The same campaign, carried out by the Internal Trade and Consumer Protection Directorate, issued 14 infringement tickets, and confiscated 53 canisters. Residents denied the governorate’s statements, saying that the measures taken only targeted small monopolists close to the district’s local government administrator, while no one dared stop the major monopolists who are backed by the militias.

The Baath Party branch in Aleppo has also intervened to reduce popular anger, with members of the branch leadership and officials from the province distributing 400 gas canisters in the Aqioul district, 100 in the al-Safa district, 650 in the al-Aziziyeh district, and 550 in the al-Jabariyeh district. Residents ridiculed the amounts that the Baath Party and governorate officials distributed, and accused them of visiting distribution centers to take pictures and steal gas canisters allocated for distribution.

The cold weather and the absence of heating have increased the incidents of respiratory system inflammations among children in Aleppo, especially newborns. On Wednesday, a child died in the Bustan al-Qasr district after her condition worsened. Two days earlier, another child died in the Bab al-Nirab district for the same reasons.

The governorate said that work on smart cards to secure fuel for cars would begin on Thursday and those who did not obtain a card would only be able to get 20 litres of fuel, which stirred anger among transport workers.

Fuel oil, gas and benzene are sold on the black market at fantastical rates, with the price of a litre of gas reaching up to 1,000 Syrian pounds. Gas stations monopolize fuel and only small amounts are distributed to customers, while the largest portions of fuel is distributed to owners of factories and electricity generators.

Because of the wave of cold weather and the rarity of fuels, the eastern districts of Aleppo have witnessed the displacement of families to opposition areas in the Aleppo countryside since the start of January. This is in addition to the major increase in the prices of most foodstuffs and transport. Prices for some foods in Aleppo city, which is under regime control, are twice what they are in opposition areas.