With the winding down of military operations, many Syrians are starting to turn on Iran and their attempts to penetrate Syrian society writes Hussam Salah. 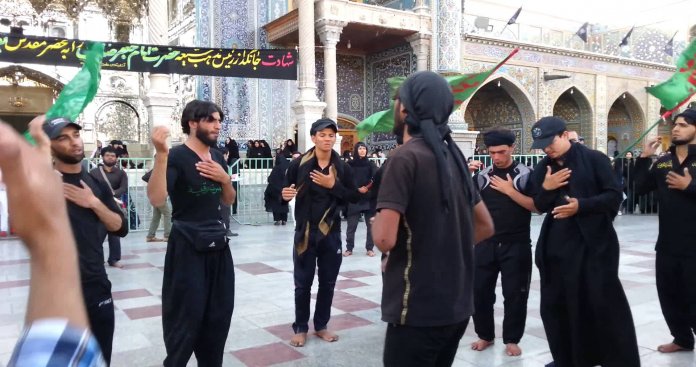 On Jun. 15, the Al-Watan newspaper, which is close to the Syrian regime, in a precedent which was the first of its kind, published an article titled, “Sorry to Ali Akbar Velayati: The World Could Fall, and Syria Would Not.” This was a response to repeated Iranian statements about the Iran’s role in saving the Syrian regime from falling. After this, voices followed from the heart of the regime from those who also sensed an Iranian threat to Syrian society. Maggie Khozam, a media figure who has thousands of loyalist followers on social media, published a video in which she indirectly attacked Iran, following the issuance of the controversial Religious Endowments Ministry Decree No. 16, saying at the time that, “Bashar al-Assad may have been forced to sign this decree.”

This trend, which has appeared inside the regime, has begun to sense an Iranian threat to Syrian society as a whole, given that military operations have been reduced and the regime has regained control over large parts of Syria. Loyalists across the entire spectrum welcomed the entry of thousands of fighters from Iran on a sectarian basis, and headlines glimmered in newspapers and on social media called Iran an ally and a strategic partner, without considering what the cost of this would be and what Iran’s compensation would be after the war.

After the Russian intervention in Syria, and the tightening of the economic noose with the additional sanctions imposed, Iran’s military presence in Syria might not last. The intellectual, social and religious penetration of Syria was, for Iran, the key to the solution—despite the fact that no religious, cultural or social ties unite them with the Syrian street. Most of what Syrians knew in terms of the Iranian presence on their land was connected to religious tourism, and visits to shrines and for rituals which were carried out in specific places and times of the year. Today, there are parts of the Damascus countryside, Daraa, Homs, Hama, Aleppo and Deir ez-Zor which are almost entirely Iranian. They have built shrines there, as well as schools, universities, and religious outreach centers. The imposition of the Shia call to prayer in the Deir ez-Zor countryside a few days ago by Iranian militias and supporters may be in preparation to Shi’ify the residents of these areas entirely. Mohamed al-Deiri, a resident of al-Mayadin, said that, “The Islamic State has come back in Iranian garb, now with the knowledge and the blessing of the regime.”

Deiri adds, “Iran is trying to establish its presence in these areas and to expand its popular base. It is focusing on social and service factors, as well as spreading Shia Islam among the area’s residents, and mobilizing young men and bringing them into its militias by offering them generous packages of money and weapons. Many young men have begun to sense a threat, especially for their children in the schools they’ve opened, which are far from Syrian society’s culture and identity.”

In Damascus, which is home to more than five million people, latmiyat and sectarian slogans and images of Khamenei have begun to spread in an unprecedented fashion. Old Damascus has become a center for the Iranian presence, through property and shop purchases, and the spread of loyal militias. Faced with this Iranian penetration, trends have appeared inside the regime calling for Syria to become closer with Russia rather than Iran, given that Russia is a “more civilized and open-minded ally.”

Saeed, an employee in a government department, says, “Fatigue with the Iranian intervention in Syria has started, especially in Damascus. Traders and residents of Old Damascus are asking for the identity of the any buyer, before selling their property, and they are refusing offers if the buyer is Iranian or a intermediary for an Iranian.” He said that, “Many loyalist Syrians have begun hoping for an end to the Iranian intervention, in exchange for giving broader powers to Russia.”

Raba, from the city of Lattakia, told Al-Hal, “Of course Russia understands the nature of Syrian society better. The Iranians are trying to enter by way of religion and outreach, which many of us don’t want.” She added, “After the Russian intervention in the coastal area, Iran’s role declined, and we noticed a difference in treatment. The evidence of that is that many Russians began to live in our area, and there have even been a number of marriages between Syrian women and Russian men.”

Despite the Iranian presence and the major Shi’ification operations and purchasing of loyalties, as well as other policies they are pushing to penetrate the Syrian social fabric, many analysts believe that this presence will remain fragile. The militias and organizations Iran has built over the years of the war could break with the ending of their funding, which is what the United States is openly trying to do. Russia, the “former ally”, has often made statements in the context of the “need for all foreign militias to leave Syria.”