The war has displaced millions of people who have had to restart their lives in new areas writes Sada al-Sham. 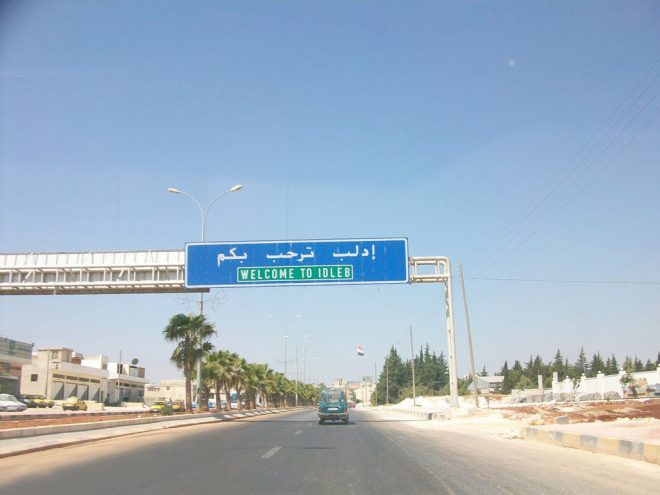 Younes Hussein’s house, which is in the town of al-Habeet in the south of Idleb province, was hit by an airstrike a few years ago, forcing him to flee toward the Turkish-Syrian border. The area was considered to be safer compared with the southern Idleb countryside.

Hussein, 49, tells Sada al-Sham that he preferred to move to the town of al-Dana after his home was hit by an airstrike, to preserve his family’s safety, because the southern Idleb countryside was subjected to constant bombardment and airstrikes by Russia and the Assad regime.

Hussein adds: “I bought land there and built a small house for me and my children, living in the town of al-Dana, which is one of the safest areas in the Idleb countryside, since it is close to the Syrian-Turkish border.”

He continued: “I started a new life from zero. It was difficult in every sense of the word. What was hardest was the decision to stay here in al-Dana and to replace the home that I lost. I return to my original home when I get a chance and do some repairs, as well as tending to the land. I think if we in Idleb are spared the attack that the regime forces are planning, and if my older son is married and has stability, then maybe he will return to the house in the town and live there — that’s what I’ve been thinking.”

Ammar Abou Qassi, a man in his fifties, told Sada al-Sham: “The suffering of the displaced never ends. It is always accompanied by a feeling of helplessness and a lack of self-esteem.”

When he came from the northern Homs countryside toward Idleb at the start of 2013 to receive treatment, he tried to settle in the Bab Asqa area near the Turkish border in the Idleb countryside. He did not have enough money at the time to secure a house for his family to stay in, and so his wife went to the Aisha Umm al-Momenein camp in the area, which was set up for women. He and his son stayed with a group of young men from the area in a house near the camp.

He says: “I still live in the same area, but after two years of my wife living in the camp, I decided to get her out. My son and I learned motorcycle maintenance, which provided a source of income and meant that I could rent a house for everyone to live in. Now we live in a semi-acceptable state, but there is still a pain in my heart because it isn’t easy.” He adds: “It’s a new life in every sense of the word that we’ve begun here in Idleb after we lost everything in the northern Homs countryside, where a large part of our house was destroyed. Going back there would be a problem as well. I ask God to give us relief soon.”

For Mayar Zarzour, 45, who was displaced from the city of Lattakia and now lives in Idleb city, he has acclimated to his new life there, especially since he has a large number of relatives with him. The other issue which has eased his displacement is his previous work. Before the revolution, he was a civil servant in one of the government departments in Idleb, and so he has many friends and acquaintances there.

Zarzour told Sada al-Sham that things are fine for him and his family, and that he and a partner have opened a small restaurant in the city of Idleb, and he has an adequate income. He adds that when he came to the city he learned that humanitarian aid was not something that he could rely upon and that for this life to continue, it would be necessary to push to implement this idea and work until it succeeded.

The United Nations said in a statement issued at the end of July that more than 1.2 million people have been displaced inside Syria over the course of the first six months of the current year alone. This was announced in a press conference held by the associate spokesperson for the Secretary General, Eri Kaneko, at the UN headquarters in New York.

The latest displacements in Syria occurred in the south, where thousands of civilians were displaced from Daraa province, with some of them reaching Idleb in the north. Before the displacements, which impacted the northern Homs countryside and the southern Hama countryside. The biggest displacement to occur was in the Damascus countryside, in eastern Ghouta and the eastern Qalamoun areas.