Many women, who have been widowed, are taking jobs to provide for their families, in the face of social opposition and against tradition writes Ana Insan. 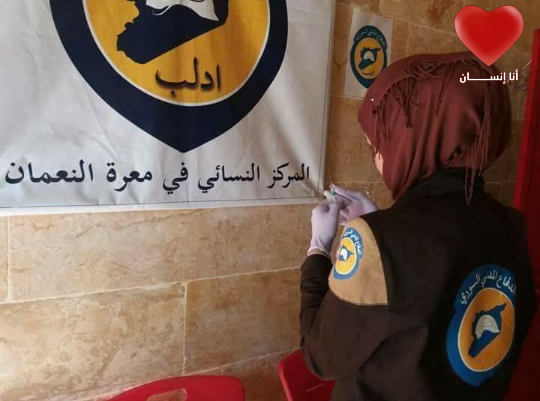 The world turned black in the eyes of Umm Firas, a 38-year-old woman from the village of Hass. Her husband was killed in the ongoing war, leaving her without a source of income to protect her and her five children from near-starvation and destitution. Umm Firas told Ana Insan: “I’ve grown tired of traveling from door to door of the aid groups, trying to secure some aid baskets, which do not offer enough to stave off hunger. So I decided to work and to depend on myself, but looking for work is no easy matter because I don’t have a degree to help me in life. After a hard job search, I was employed as a worker in a field hospital. Despite long hours of hard work, in addition to the poor treatment and low salary, I find it a lot better than putting out a hand of need to others.”

The terrible Syrian war has taken many lives and forced many women, especially in liberated areas, into the position of breadwinner for the family, thereby doubling the suffering in light of the difficult living situations that prevail with the lack of security and stability and the rarity of work opportunities, as well as the customs and traditions that prevent women from going out to work.

Faced with this situation, many women have been forced to break with prevailing customs. Manar al-Shalah, a 28-year-old woman from Maarat al-Nouman is one of them. She has a degree in nursing, and was able to exit the social constraints into which she had been placed and join a Civil Defense team with the aim of providing herself with the necessities of life and caring for her three children after her husband was arrested by regime forces at the start of the revolution.

Shalah says: “When I started working, I faced pressures and criticism from society, which rejects the idea that women should join the White Helmets. But after people came to see the extent of our humanitarian services which men cannot provide, such as caring for the women wounded during the daily bombardments, and entering houses and schools to carry out awareness campaigns, they saw the positive impact of my work. Some even wanted their girls to join.” Shalah adds that despite the difficulty and dangerous nature of the work and the long hours, she feels satisfied and happy because she is providing — if only a little bit — humanitarian services for the people of her afflicted country.

In a phenomenon the first of its kind, the Idleb area has recently seen women driving buses to regime areas. This coincides with the lack of men who have mostly been threatened with arrest at security checkpoints for one reason or another.

Haifa, a 40-year-old from Maarat al-Nouman, leaves early every morning with her taxi to gather civil servants and others forced to go to regime areas, whether to collect their salaries or to get official papers or passports, in an effort to earn a living and care for her seven children, after they lost their breadwinner in the war.

Haifa told our website: “I resorted to this difficult job because it was the only option I had, since I don’t have any other work to provide the needs for my children. Before the revolution, I underwent a training course in driver’s education and got a certificate that qualifies me to drive.”

These women have not been spared the critical view of society, as many believe that they are departing from the customs and traditions of Idleb society, which considers these types of professions to be for men, especially in light of the current situation which makes it difficult for women to move from one area to another, with the many security checkpoints. Some believe that women should look for alternatives to this work, which they described as dangerous, and which is not appropriate for women, like teaching sewing and weaving, so they can meet their daily needs in a way that preserves their dignity and have a role in society without subjecting themselves to danger.