In the education sector, a campaign was launched called 'I will not leave my school'. It was planned by the different youth bodies to reopen schools, including a team called 'The Eye of the City'. 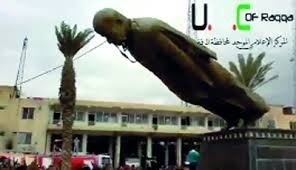 After the province of Raqqa was liberated, regime forces avenged the city, as they do in all the regions that fall out of their control. They bombarded it with jets and mortars, covering the city with a sense of death. The situation prompted the civil revolutionary movements to meet and seriously work on relief, and to demonstrate the role of revolutionary parties as an alternative to the regime's administration.

In the education sector, a campaign was launched called 'I will not leave my school'. It was planned by the different youth bodies to reopen schools, including a team called 'The Eye of the City'.

Mohamad, who is a member of the Free Raqqa Youth Gathering said: "After the city was liberated, a huge part of the population relocated because of the bombardment."

"Government buildings, markets and bakeries were closed, so we tried to cooperate with other groups to revive the city infrastructure,

"Some youth groups suggested activating an educational movement. We counted the schools and then selected a few of them according to the level of rehabilitation needed to be ready for receiving students,

"We worked together to clean the school premises and find desks, which were in shortage."

Firas, a headmaster of one primary school, said: "I was the headmaster of this school before the liberation. We began to gather students from the internally displaced, and met with their families to convince them of the importance of sending their sons to school, telling them the current situation might last a long time."

"We changed the school schedule from morning to the afternoon because air force bombardments are more active in the mornings. The idea was well accepted by everyone, so we began to sort the students out according to their ability and grade."

Another volunteer teacher, Reham said she decided to teach as part of the campaign, having graduated from the faculty of education.

"Most of our students are children between the first and third grades. My colleagues and I entertain as well as teach them… the smiles had disappeared from their faces during the bombardment," she said.

Ismail, a member of the Free Syrian Army and volunteer English teacher said he enjoys teaching over his armed work.

"I was working as a salesman and my English experience was good. What pushed me to teach was a desire to help aside from doing the military work. You may find it strange, but I actually hate carrying weapons. I was only forced to arm to defend my family against the savage regime," he said.

"I am happy when I am at school and I have the ability to separate between my being a member in the Free Syrian Army and this work. I never carry a weapon at school and I try to keep the subject out of the children's minds as much as possible."

"When students ask me about the Free Syrian Army and the weapons, I tell them they should think about other things".

"The determination for teachers and students to return to school is a product of their determination to continue life in general,

"The clashes next to the schools are just another means to start more, and an attempt by the regime to destroy the infrastructure that has been built in liberated areas. They rely on exterminating every intellectual aspect of these people's lives, in the face of whom the doors to education can't be closed."