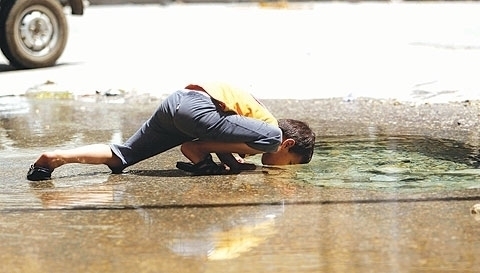 The fighting between Syrian government forces and the rebels in and around the town of Al-Qusayr, near the border with Lebanon, has intensified.

One of the most visible results of the intensification of the conflict is the deepening humanitarian crisis. This has led international organizations to call for aid to be allowed in and civilians to be allowed out of the area.

The fighting between Hezbollah and the Syrian rebels has spread into Lebanon for the first time since the start of the Syrian conflict. Fifteen people, including one Hezbollah official, were reportedly killed in clashes on the Lebanese side of the border over the past two days. Hezbollah has been fighting alongside the Syrian government forces in Al-Qusayr area for the past week.

The United Nations and the Red Cross have demanded to be allowed into Al-Qusayr immediately, in order to help besieged civilians. UN Secretary-General Ban Ki-moon has called on all sides to allow civilians to leave.

The Red Cross also called for its aid workers to be allowed into the town, saying it was ready to provide immediate aid to the people of Al-Qusayr. However, the Syrian News Agency reported that Syrian foreign minister Walid Al-Mouallem told Ban Ki-moon on the telephone on Sunday that “Syrian authorities will allow the Red Cross, in cooperation with the Syrian Red Crescent, to enter the town as soon as military operations are over.”

Human Right Watch has said the government’s regular forces and the militias were obliged to provide a safe passage for civilians. The organization expressed its concern about the safety of civilians and the injured from both sides, adding that the “Syrian government must be put under pressure to meet its obligations according to international law.”

In a related development, the director of the Syrian Observatory for Human Rights, Rami Abdelrahman, has said North Korean officers were playing a role in Syrian army attacks in Aleppo.

Abdelrahman told Asharq Al-Awsat that “the exact number of the officers is not known, but there are definitely 11 to 15 North Korean officers, most of whom speak Arabic,” adding that the officers were “deployed in a number of areas, including defense factories southeast of Aleppo and at regular forces’ stations in the city.”

He stated that “these officers do not participate in field battles, but provide logistical support and help with plans for military operations,” adding that “they also supervise the artillery bombardment by the regular army.”

In June 2012, the UK-based Jane’s Defence Weekly reported that North Korean engineers were assisting the Syrian military in upgrading its inventory of Scud missiles. So far, the Syrian government has launched several missiles into rebeld-held territory.

In another development, London’s Daily Telegraph reported on Monday that Al-Qaeda’s branch in Syria and Iraq has set up a complaints department.

“The complaint should be in writing, provide details and give evidence. We promise that we will ensure accountability for anyone committing violations, and they will be sent to the Shari’a court of Iraq and Syria.”

The notice was signed by the “Emir” of Raqqa, a title regularly claimed by Al-Qaeda sub-leaders.