A study conducted before the Syrian crisis found that there are around 100,000 children working in Lebanon 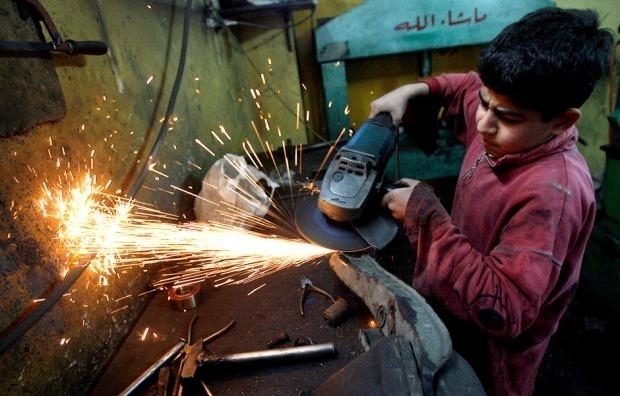 The Syrian crisis has exacerbated the situation of child labor in Lebanon. Though no precise figures exist for underage workers in Lebanon, one can easily observe the deteriorating state of affairs on the streets.

The Lebanese labor ministry and the International Labor Organization (ILO) are preparing to conduct a national survey on the issue. Deputy ILO Regional Director Frank Hageman says there is no reliable data on the issue, adding that it is unrealistic to characterize all child laborers as foreign since many such workers are Lebanese.

A study conducted before the Syrian crisis found that there are around 100,000 children working in Lebanon throughout its governorates in the following percentages: North, 34.4; Mount Lebanon, 36.5; Bekaa, 13; South, 12; Beirut, 8.4; and Nabatiyeh, 6.

The aim of the new survey, according to Hageman, is to identify the exact number of children working in Lebanon, as well as the type of work, their employers, and number of hours worked.

Hageman says that the ratio of child labor in Lebanon is low in comparison with other Arab countries like Egypt and Yemen. However, the situation has changed with the influx of Syrian refugees into the country and the absence of political action to manage their problems.

Not far from the Lebanese hot zones, media strategy expert Issam Azouri describes the situation of a child receiving $20 a day to throw a hand grenade or burn a tire.Labor minister Salim Jreissati sees this as a problem compacted by the UNHCR’s inability to “fulfill its obligations towards Lebanon in regards to Syrian refugees."

"We do not know the number of children exploited in the armed confrontations," Hageman explains. But he mentions "indications of trauma caused by such exploitation in children coming through the borders."

Not far from the Lebanese hot zones, media strategy expert Issam Azouri describes the situation of a child receiving $20 a day to throw a hand grenade or burn a tire. Jreissati gives another example: a young girl carrying a firearm propped up by a gunman in Tripoli.

"Communities cannot exploit children like this. Decree 8987…prohibits the employment of young persons under 18 in jobs that can endanger their health, safety, or morals," Jreissati adds.

While the exploitation of children in armed conflicts is one of the worst forms of child labor, there are other types of exploitation. Fadi, for example, was a young boy employed by a taxi driver in his village to lure young children and violate them sexually for LL5,000 ($3.33) a day. The story was discovered later by a literacy worker.

However, all attempts by a rights activist to follow up on the situation with religious authorities and police have failed. Today, the activist has lost track of what happened to Fadi and his young friends.

"Begging is nothing to be ashamed of," a 4-year-old boy tells Al-Akhbar. "In this country, there is no money, there is no work, and we are destined to become poor."