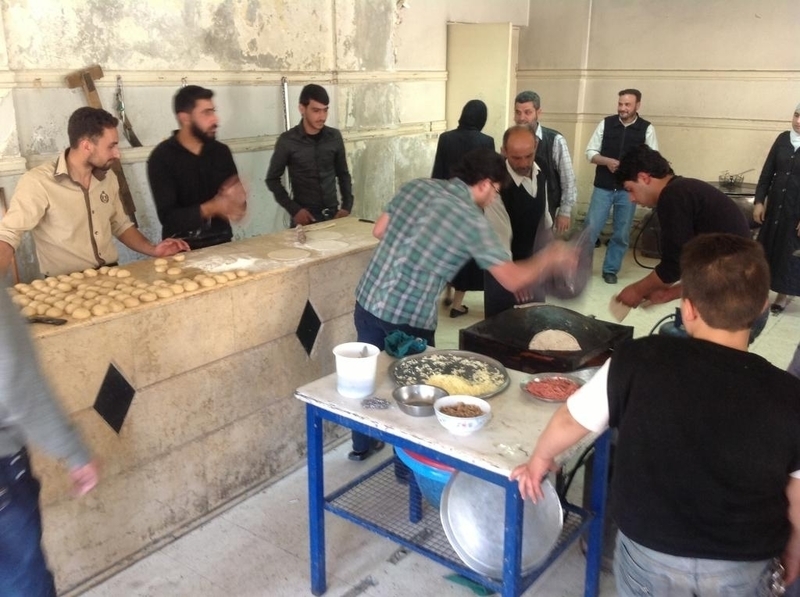 The General Authority for Civil Defence in Douma and its Surroundings was founded in the city east of Damascus by seven young Syrian men at the beginning of what Syrian anti-government activists call the “revolution,” in March 2011. They started showing up to demonstrations with bags of gauze, cotton and cola for treating the effects of tear gas.

None of the original team members, three of whom were killed, had any prior experience in emergency response, but they chose to contribute to the revolution in this way. Over time, they increased their efforts to keep pace with the growing number of bombardments and massacres.

Eventually, they formed the current Civil Defence Corps, which includes some 100 volunteers and uses one of the old government buildings as a headquarters. The Corps is not linked to any group in the armed opposition, and its members do not discriminate between civilians and fighters when treating the wounded.

The opposition controls almost all of Douma, making it the target of daily bombardment by land and air. The shelling is often indiscriminate, with 90 per cent of the victims being civilians. Opposition fighters are most often killed on the front, not inside the city, where military aircraft patrol the skies, dropping bombs on different neighbourhoods. After the Syrian government abandoned Douma and opposition forces took it over, some residents returned to the city, where the population is currently about 250,000 people, down from 700,000 before the revolution.

Services are completely cut off in Douma: There’s been no electricity for the past 8 months and no Internet except for satellite Internet used by some activists.

In one corner of the courtyard outside the Civil Defence building, an ice cream truck has been converted into a makeshift morgue where bodies are kept refrigerated before burial.

Near the refrigerator, a tent has been erected to receive the bodies of martyrs for preparation before they are laid to rest. Um Mohammed is responsible for preparing the bodies of female martyrs, while Abu Yassin, a former cook in his 40’s, prepares the bodies of men while keeping a careful record of the deaths and any relevant details.

Abu Yassin, one of the founders of the Civil Defence corps, witnesses the last moments of the martyrs before they are buried and also sees their loved ones say their last farewells to them.

Inside the “martyrs’ tent” – Photography by Razan Zeitouneh

Friends say Abu Yassin often breaks down in tears, hugging whoever happens to be standing in front of him in that small tent, taking in the anger and sorrow of the families. These scenes play out two to four times a day, on average.

But here, as in every corner of the city, one can see life asserting itself in the face of death. Abu Yassin has set aside a little plot next to the refrigerator for growing parsley, onions and other vegetables to help meet the needs of the Civil Defence Corps’ kitchen.

In addition to feeding the volunteers, the Civil Defence kitchen also prepares meals for fighters in exchange for small amounts of money, which help support the Corps’ activities.

Cooking gas was available when I arrived, and I was treated to a special breakfast in the kitchen overseen by Abu Yassin, who lends an air of camaraderie and fun to the occasion. I was joined by a large number of activists waiting to whet their appetites with tasty pastries.

Most of the volunteers, who range in age from their teens to thirties and worked in a variety of occupations before the revolution, come from similar working class backgrounds, and appeared warm and open with each other.

As I was given a tour of the building, the local mosques put out a call over the loudspeakers requesting blood donations for a certain blood type for a wounded person. Within minutes, about a dozen people, including three women, had gathered in front of Civil Defence’s blood bank.

Doctors in the city’s medical office are dissatisfied, however, with this blood bank, citing the lack of supervision by qualified medical staff. But activists say all the blood they collect is sent directly to the medical office to be tested before it’s used.

In addition to the blood bank, there is also a central pharmacy that collects the contents of city pharmacies abandoned by their owners. The pharmacy keeps a register of what was taken in case the owner wishes to be compensated. The rest of the pharmacy’s medications are donations. There is also an emergency room and hospitalization room where patients are moved after being initially treated.

One part of the Civil Defence Corps is a group of volunteers who make up “The Medical Knights” squad, which is tasked with external medical follow up.

There is one doctor in the medical department while the rest of the team, both men and women, are nurses or volunteers who have gained experience in emergency response, either by virtue of practice since the beginning of the revolution, or through local training courses. Others work in administration.

There is even a special room for making fire extinguishers of various sizes.

Abu Salma, who worked in a furniture workshop before the revolution, is just 26 years old. He is rarely found behind his desk; he prefers to work in the field, assisting in emergency response operations alongside his team.

According to Abu Salma, one of the founders of the Civil Defence Corps, most of the group’s funding comes from donations made by family and friends. While these funds are insufficient to grow the Corps, Abu Salma said he is proud of the group’s independence from political or military groups.

Despite Abu Salma’s talk about the Corps’ independence, many spoke about internal differences and pressure from external opposition parties, civilian and military alike, to influence its work.

Some residents who spoke with me noted the Corps’ lack of specialists and trained personnel, most of whom are volunteers learning on the job by doing a variety of activities, not all of which fit the concept of civil defence.

On the other hand, some believe that self-motivated young people volunteering and pouring their energy into a grassroots civilian service and aid organization is in itself an achievement. They admit that the lack of specialists is a problem, but point out that the volunteers undergo training, adding that they should be supported and encouraged to develop their abilities in the appropriate fields.

As we were exiting the building, a military aircraft circled overhead for a few moments before setting off to drop its cargo on some other part of the city. The youths around us rushed out and set off towards the bomb to evacuate the injured and collect the first martyr of the day.