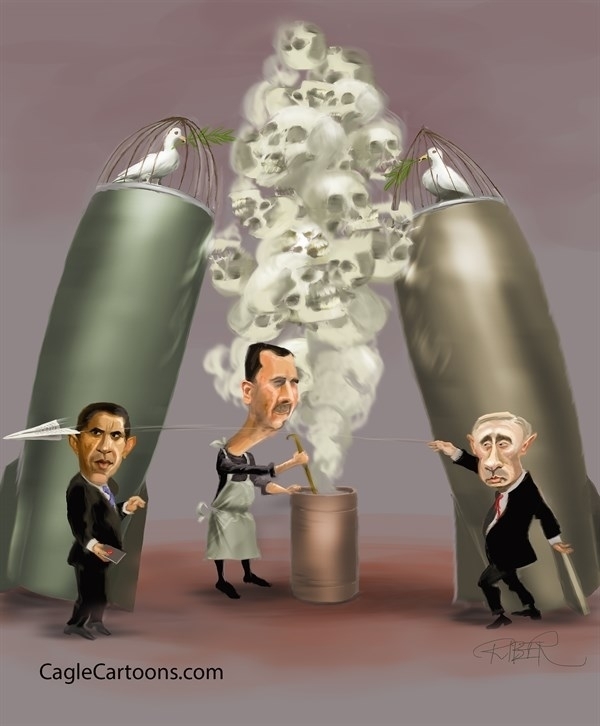 I borrowed this title from a Danish activist who supports the Syrian people in their struggle against the regime of Bashar al-Assad. The activist wrote it on her Facebook page, in a throwback to Clinton administration’s campaign motto of “It’s the economy, stupid,” which promised to bring the country out of a recession.

The Danish activist was indirectly referring to the deal going on over and under the table between Assad’s regime and the United States and Western countries.

On Tuesday, President Bashar al-Assad's government accepted a Russian plan to turn over its chemical weapons stockpile as momentum mounted for a proposal that could avert American strikes against the regime. The U.S. and France turned to the United Nations for a resolution to ensure Damascus complies.

Later, Assad himself told a Russian TV channel that Syria will cede control of its chemical weapons to the international community.

In what is believed to be his first public acknowledgement of the country's chemical weapon stockpile, the president was quoted by Interfax news agency as saying the move had not been prompted by US military threats but Russian diplomatic efforts.

"Syria is placing its chemical weapons under international control because of Russia. The US threats did not influence the decision," Interfax said, quoting the state-run Rossiya-24 channel's yet-to-be-aired interview.

President Obama, in a national address originally intended to rally the country behind a strike on Syria, instead used the moment to announce he was hitting pause on military action in order to let negotiations over a Russia-backed plan run their course.

“This initiative has the potential to remove the threat of chemical weapons without the use of force,” Obama said Tuesday night.

The president said he has, therefore, “asked the leaders of Congress to postpone a vote to authorize the use of force while we pursue this diplomatic path.”

The Syrian opposition and the Syrian public had contradictory feelings regarding both the American strike against the Assad regime.

On Wednesday, the Syrian National Coalition, the main political opposition, and the Free Syrian Army (FSA) expressed fury at Mr. Obama's recent decision to engage a new diplomatic path with Russia and attempt to negotiate an agreement under which the Syrian regime will supposedly give up its chemical weapons arsenal.

"This is a new and dirty trick by the Syrian regime and Russia is supporting them. They want to buy time to kill the Syrian people," said Louay al-Mokdad, a spokesperson for the FSA. "It is just another lie. Bashar al-Assad doesn't understand anything other than force."

The contradictory feelings come from the deep desire for Assad and his regime to be punished for their crimes against the Syrian people on the one hand and the fear that the strike might cause serious damage to the country and to the civilians there.

The fear comes from the fact that Assad’s regime has already moved his soldiers to schools and hospitals, making civilians shields to protect them.

People also feared that if the strike did not topple Assad, he would get back at them and be even fiercer and more devastating.

But it is not only fear. Many Syrians are opposed to violence in general and they cannot support any military act or abandon their long history of non-violence and peaceful resistance.

However, the majority of Syrian citizens are still in favor of punishing Assad’s regime for its crimes. Still they have lost faith in President Obama’s intention to positively intervene in their country.

The Sada Institute, a Turkish-based Syrian institute, ran a poll among Syrians in the areas that are under the rebels’ control. Of the 1,800 Syrian citizens in its sample, 41 percent said they believed that US the administration is serious about striking Assad’s regime; 31 percent said they did not believe it, and 28 percent said they were not sure.

But apart from polls, activists slammed President Obama for his “uncertain position.” Saleem Yaghi published a cartoon on his Facebook page showing Russian President Putin telling Mr. Assad, “We neutralized his dangerous arsenal.” He was pointing at Mr. Obama.

Writer and journalist Rama Jarmakani wrote, “For years, Syria fights to get a seat at the UN Human Rights Council, but the maximum it gets is a seat in the Chemical Weapons Convention."

Naim Hilaneh wrote that “the Statue of Liberty is in the USA because statues are usually erected for dead people only.”

The activist, who spoke on condition of anonymity because he still lives in Damascus, added that if the West let Assad off in return for turning over his chemical weapons, it would only mean “a license to kill.”

But analyst Mohyidin Lazikani believes otherwise, writing on his Facebook page that it would be different this time.

“This time,” Lazikani writes, “there will be a UN resolution, a timeline, and neutralizing of Assad’s military capacity to use his missiles and jets, with which the wicked [man] has been destroying Syria for two years… No matter what Putin could do, he would not rescue him [President Assad] this time.”

In brief, what counts should be justice and not only “the image of a president,” as one analyst put it in. Any initiative should lead to that end. Stopping the killing and the suffering of the Syrians, ensuring justice for them, and rebuilding their country is what counts. Any initiative that leads here is welcomed by most Syrians.

A month ago, a hundred prominent intellectuals signed a statement in which they suggested a plan to save Syria and end the war there.

In that statement, the signatories called for "a political solution that saves the blood and the unity of national land, which requires Bashar Assad and his regime's pillars to step down, and a transition of power under the supervision of the United Nations to a full-authority transitional government that prepares for the election of the constituent council which in turn recognizes the constitution and supervises fair parliamentary elections."

It is the dictator, stupid. And this is how solution can be reached.