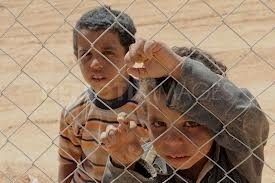 In Jordan there are more than one million Syrian refugees, half of whom need financial and medical assistance. Many of them are children who are turning away from their schools to become vendors in the streets.

Mohammad, a Syrian child not more than12 years old, headed towards some passers-by in the Sufieh area of Amman, the Jordanian capital. He is trying to sell them a jar of makdous, made at home by his mother in the popular Syrian style, usually served by families at breakfast and dinner.  Mohamad keeps repeating his yells to people passing in the crowded street. “Makdous! Made at home with pepper and nut, my mother made it, I swear by God!”

He explains the benefits of the food, which is one of the main elements of meals in the Levant in general and for Syrians, in particular, especially in autumn. Makdous is typically made of small eggplants stuffed with walnuts and mixed with garlic, spices, olive oil and red pepper.

Mohammad explains, “My mother, my three brothers and I fled from Aleppo more than nine months ago. We have no money to live, so my mother makes supplies at home, and my brothers and I wander the streets to sell them.”

He points, saying, “That is my brother Ahmad at the side of the road and that is my sister Kifah. She is speaking to those in the car parked there, selling them some food. All of us are under16, and we haven’t gone to school for two years. We ran away from the war that Bashar al-Assad wages against us. Bashar destroyed most of our area in the countryside of Aleppo. We moved many times from one place to another, but my mother decided at last to travel, seeking safety. She was afraid of the shelling. Here, she knows some Syrians, and they [have] helped us. In the beginning, she worked in a small sewing factory, but the salary was so low compared to the long hours of work. So, my mother thought to work at our small home that we rented in a simple area. And ‘God is the Provider, uncle, as we say in Aleppo.’”

Mohammed and his brothers roam the streets to sell a few jars of food so they can earn enough dinars to pay the costs of their daily living. This situation is not unique to the Syrian families who fled to Jordan from the flames of Assad’s war on the people demanding change—the same scene is repeated in Egypt, Turkey, and commonly in Lebanon.

Here in Jordan, it’s impossible not to mention the miserable refugee camps. The most famous is probably the Za’atari camp, where unforgettable humanitarian stories happen every day, and the refugees can hardly live. As we all know, Assad’s regime has displaced millions of Syrians, who fled to places of exile near and far. It continues stressing all the time "that it had managed to influence the course of the crisis and prolonged it, in order to exhaust its opponents", as it says.

According to economic and political circles close to the Jordanian government, Jordanians have lost about 150 thousand jobs due to the entry of Syrians to the labor market. Add to that other revenue lost due to the crisis, and the brotherly neighbor of Jordan has lost about $4 billion so far.

Jordan has absorbed more than one and a quarter million Syrian refugees, most of whom now need psychological, financial and medical assistance. At the same time, Jordan has received much financial and non-financial aid to meet the challenges and pressure sit’s faced in this drawn out crisis. And Syrians have supported the labor market with various skills, some of which are new to the Jordanian market, particularly those professional crafts and industries known by the Syrians. However, Jordanian authorities say that, “aid seems too limited to meet the growing need for supporting the Syrian refugees.”

It’s worth mentioning, according to Mrs. Hiba Al Ahmad, a Syrian living as a refugee in the Za’atari camp, that Mohammad and his brothers’ circumstances are better than tens of thousands of other Syrian refugees. They live in truly tragic conditions, not under “humanitarian circumstances” in any sense of the words. The camp is crowded with more than 160,000 Syrian refugees in a desert environment, among the harshest for human life.

Mrs. Hiba adds that although many of the Jordanian government staff are corrupt and take advantage of their government jobs, we can’t blame the Jordanian authorities because they’re no longer able to accommodate the growing numbers of refugees. But before blaming the international community, we first blame the Arab and Muslim communities, who keep talking about values and humanity, [while] leaving us alone to face all kinds of death and humiliation inside and outside our home.

Experts point out that real estate prices in Jordan more than doubled due to the influx of Syrians and their need to rent empty and furnished apartments. Experts also say that about 40 percent of the Syrians are in the city of Irbid, 27 percent in Amman,16percent in Mafraq (by the Syrian border),about 8percent in the city of Zarqa, and a small proportion are scatted across the rest of Jordan’s governorates. Add to that more than 170,000Syrian refugees living in the Za’atari camp and about ten thousand staying in a camp paid for by the United Arab Emirates.

With the ongoing potential for a military strike against the regime of Assad Jr. (not for Syria as propagated in the media), Jordan is expecting an influx of even more displaced people fleeing from the horrible war. The potential strike would be led by the US, and was recently approved after the G20 Summit, by 11 countries including France, Germany, and Turkey, and endorsed by the GCC. Now, Syrians and their neighbors fear that the expected military strike would not lead to the demise of the Assad regime. This means continuous drawn out and greater suffering by Syrians and all those in neighboring countries.

The chaos and continuous conflict in Syria is forcing Mohamad to grow up away from his home and his school. It will keep him and his brothers here at the crossroads, waiting for somebody to buy a jar of food made at home by his mother. Mohamad is only one example of the many Syrians, suffering but cautious, lest their return is still delayed even after the demise of the Assad regime.