25 thousand homeless Syrians in Gaziantep, many of whom have found no place of residence except for the city’sabundantly scattered parks 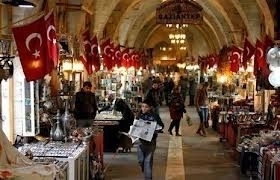 Muhammad is a Syrian boy from the Aleppo countryside whohas found work in the old Turkish city of Gaziantep selling sweets in a shop.At the end of a week of hard and painstaking work, he takes 50 Syrian pounds (equivalent to 25 dollars) to helphisfamily meet the costs of life in a city that has found itself overwhelmed by more than one hundred thousand Syrians. Most of the refugees come from the city of Aleppoand its countryside, [and their large presence has] created a state of unease among the population of the city, which borders Syria and was affiliated with the mandate of Aleppo during the Ottoman rule. Here in Gaziantep, rent for apartments has increased significantly and getting an apartment at an average price has become a dream.To add to the confusion, the majority of Syrians who left Egypt after facing severe restrictions there came to live in this clean and organized city.

Any Syrian wandering in the old streets of Gaziantep notes their similarity to the streets of Aleppo, now abandoned by many of its people because of the intensification of fighting.  Aleppan businessmen in Gaziantep have invested their money in restaurants and shops, offering services to the Syrians and Turks in several areas. Barbersand tailors have also found professional opportunities in the city in partnership with the Turks, and the law requires a Turkish citizen to partner with any Syrian who wants to formally establish commercial activity in Turkey.

Sources confirm the presence of about 25 thousand homeless Syrians in Gaziantep.Most have found no place of residence except for the city’sabundantly scattered parks, but the advent of early winter this year will add to the Syrians’ wounds.Charities have begun to develop plans to ease the plight of these people.

Among the [refugees] is Akash, who works as a shoe cleaner in the commercial heart of the city. He returns to his family at the end of the day with 10 Turkish Lira in his pocket, enough to buy bread. Akash sits on the ground waiting, watching the shoes of the passers-by more than watching their faces—[the feeling of] alienation killed any desire for life in his spirit. I ask him,“Do you yearn for Syria?” He raises his head with tears in his eyes, saying “Syria is no longer for the poor like us.”

A Turkish shop is hardly ever without a Syrian boy, working for a low salary to translate for the newly arrived Syrians. The majority of the Syrian young people in Gaziantep are keen to learn the Turkish language quickly in order to find jobs.

In Gaziantep, everyone is busy securing the rent for their house, the day’s food, and the supplies their children need for the start of the school year. But late at night, they sleep on the shoulder of Syria, and dream the same dream—toreturn to it, with the dignity they used to have. But the next day’s sun remindsthem they're in Gaziantep, and that the return trip to Syria has not yet begun, and it may never begin. This is what makes many people lose the desire for life.