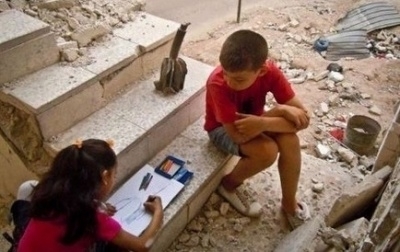 From a drawing I can guess if you are with or against Bashar al-Assad. That's what happened recently with 10-year-old Ammar, while in school in Damascus.

The teacher asked the pupils to draw the national flag of Syria. The boy was very smart to guess that arts teacher aimed to know who would draw the flag of the Syrian revolution. ‘I painted the regime flag,'' Ammar said to a Zaman al-Wasl reporter.

''We knew it was a trick—we always talk about the achievements of the Free Syrian Army in a low voice,'' Ammar added.

As a result of the ongoing Syrian civil war, there are currently two different flags representing the state. The incumbent government, led by Bashar al-Assad and the Ba'ath Party, is using the red, white, and black flag of the United Arab Republic in use since 1980 while the Syrian National Coalition re-adopted the green, white, and black flag of independence in 2012.

“This is an examination of nationalism,'' a pro-Assad mathematics teacher said, who was the first teacher to use this kind of manipulation on innocent children.

The regime schools in Damascus have welcomed the idea, which has raised fears among families.

Ammar’s case wasn't the only one, other teachers in schools under the control of Assad's authorities have asked the children to draw the flag, too. Two children have drawn the revolutionary flag and they haven't attended class since then, according to a Zaman al-Wasl reporter.

Meanwhile, four million Syrian children are suffering as a result of the horrific conflict – one of the worst humanitarian crises of our time— which is now stretching into its third year. Two million people have fled to neighboring countries, but many more remain in dire need of assistance, says the organization Save the Children.