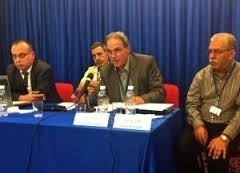 Negotiations around the Geneva II conference, which aims to bring the Syrian opposition and the regime into dialogue, have reached a critical stage: the decision on whether the conference will be held and under what conditions will be made soon. Reports indicate that the West is increasing pressure on the external opposition to attend the conference. Syrian president Bashar al-Assad reshuffled his cards after Nabil al-Arabi, secretary general of the Arab League, announced that the conference will take place on November 23. In a recent interview, Assad said that “there are no factors that are helping” the Geneva II conference happen, and tied his attendance to stopping all assistance to the “terrorists,” as he refers to the armed opposition.

Damascus Bureau surveyed the opinions of political activists and members of opposition parties in Damascus on their views on a political solution in Syria.

Kifah Ali Deeb, a member of the executive office of the National Coordination Board for Democratic Change, is confident about a peaceful solution to end the crisis.

“[This can be achieved through] an end to the violence, releasing prisoners, and negotiations in Geneva on a peaceful transfer of power to a transitional government with full powers,” she said.

“The Geneva I conference didn’t fail,” she added. “It produced a set of recommendations that we can build on for Geneva II in order to reach a political solution that will lead to a transfer of power. This will achieve the demands of the people for freedom, dignity, and democracy,” she said.

In September, the National Coordination Committee released a statement through its executive office outlining its vision for a solution.  The solution would need the agreement of Syria and the international community in convening an emergency session for Geneva II. The session would be based on a set of agreed upon principles from Geneva I, and would include the participation of the main opposition groups, on condition that the first item on the conference’s agenda be a ceasefire. In addition, power is to be transferred quickly to a transitional government with full powers to be headed by a consensual leader who will run Syria, maintain state institutions and national unity, and prepare for a democratic transition.

Permanent members of the United Nations Security Council all attended the Geneva I conference. On June 30, 2012, they emerged with a 12 point plan, the most important elements of which were the formation of a transitional government with full executive powers which would include officials from the current Syrian government, reform of the constitution, ensuring the continuity of public services and agencies, including the army and security services, and stopping the bloodshed. These decisions have not been implemented.

Deeb does not see military intervention as a solution to the crisis, even though she understands the reasons why some may support it.

“The immense suffering has led some to ask for salvation at any price,” she said, adding that she refuses any intervention whether it’s carried out by the West, Iran or Hezbollah.

Similarly, political activist and lawyer Faeq Howeija, a member of the Syrian Secular Democratic Coalition, believes that the roadmap to a solution begins with “an end to the killing, the freeing of prisoners, and giving of proper consideration to the political process.”

Howeija believes that civilian political organizations must bear the burden of applying pressure to create this reality. The coordinator of the coalition, Hass al-Atheem, proposed this in detail in a televised interview aired on Russia Today on August 31, 2013.

The second part of the solution, according to Howeija, is the Geneva II conference. He believes that certain conditions must be met for the conference to succeed.

“[These conditions are] giving priority to rationality, wisdom and the higher interests of Syria, and these are all absent from the major players. I hope they will happen, but I won’t bet on it,” he says.

Howeija adds that a political solution will unfold once the two sides genuinely feel that they cannot continue with a military confrontation.

Howeija believes that regional players, in addition to Russia and the US, may try to sabotage the conference if they feel that it was not in their interests, if changes occur on the ground, or if they feel that their allies inside Syria can finalize the conflict militarily.

Political writer Ammar Dayyoub, who presents himself as a “Syrian Marxist,” believes that addressing the Syrian crisis should not be limited to its political aspects. The alternative to foreign military intervention, which Dayyoub describes as imperialist with the goal of preventing the people from toppling the government themselves, is the continuation of the uprising in both its civilian and military forms.

Dayyoub stresses that a solution lies in meeting the economic and social demands factors that led to the anti-government protests, like more jobs, better infrastructure and government accountability.