Quiet determination to continue with life between battle zones 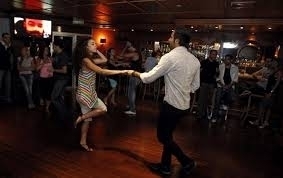 It is 7pm in Abbasid Square, central damascus. There is almost no traffic. Taxi drivers avoid the area for fear of indiscriminate shelling; the area has become a daily target for mortar shells fired from neighboring Jobar.

Continuing the path to the neighborhood of Kassaa one can see that all the shops have closed uncharacteristically early.

People develop the habit of walking under awnings for fear of mortars.

Rami, a resident of the area explains: "People in general prefer to stay in their homes or move little, especially recently, after the region became a direct target."

Leading to the entrance to the walled Old City of Damascus, there are few lights and little activity. In Bab Touma and Bab Sharqi, members of the Syrian army and so-called "national defense commmittees"are scattered behind barricades of sand, while members of the "people's committees"which are formed by residnets to defend their neighborhoods, are stationed about the area.

But further in to the old neighborhoods, restaurants and cafes still welcome customers at night, almost as normal.

Razan, who lives in one of those neighborhoods, says that visiting these places is a kind of continuation of life.

"Despite all what is happening around us, we always try to do what we're used to do. Within the old neighborhoods, cafes still organize concerts and poetry readings," she says.

She points out the coincidence of a funeral procession in the area earlier in the morning for one of the martyrs of the crisis, saying that the rising volume of music from restaurants at night and at wedding parties is no longer surprising.

In upmarket Shaalan, in Hamra Street, one must pass by Baghdad Street which separates the areas near the fire lines and outer neighborhoods.

The streets are empty of traffic on the way to the city center, where many of the official institutions, such as the Parliament and the Central Bank and various security centers are located.

Checkpoints are positioned at the entrances to the targeted areas where there have been several explosions.

Shops open their doors to customers at 10am. As one continues from Hamra Street to Shaalan, the sounds of shelling relatively distant mortar fire can be heard from time to time.

Ahmed, a shopkeeper in Shaalan, says : "The presence of key state institutions in our area obliged the security forces and the army to provide protection, especially after the explosions which targeted Saba Bahrat Square and caused them to close some entrances and set up barriers."

But the crackdown did not prevent cafes such as the famous al-Rawda and al-Kamalto continue their daily business – albeit with one change – discussions are now confined to the political debate.

From Shaalan towards the up market Abu Rummaneh and Malki neighborhoods, the security presence visibly increases.

Syrian President Bashar Assad's office is located here, and the area has not seen any demonstrations or clashes, nor are any of the committees or national defense forces present.