Several local media sources, including some opposed to Assad report that opposition shelling regularly injures civilians – including women and children 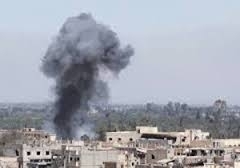 The anger is clear on the face of Motaz, 34, who works as a waiter in a restaurant as he talks about the opposition rockets and mortar shells that regularly fall on the town of Jaramana in the suburbs of Damascus.

“Everyone should know that our patience has begun to run out and that we won’t accept to remain under the mercy of their shelling,” he said.

“Why don’t you write about how the broken glass from classroom windows is falling on our children’s heads?” asks Motaz.

“The world [should] hear and see what those murderers, the soldiers of the Free Syrian Army and all their supporting militias, are doing to us.”

The armed opposition targets areas in Damascus and its suburbs under regime control in retaliation for the blockades imposed by the government on towns in Eastern Ghouta.  Those towns are currently under siege, sealed off from the outside, which has caused food shortages.  The regime also regularly shells and bombs these areas in  an effort to force the residents to submit to government control.

Shelling by government forces has cost the lives of at least 21 people since the beginning of November until the publication of this report, according to statistics published by the pro-opposition Violations Documentation Center in Syria. The opposition’s retaliatory bombing, while not quite as ferocious, has mostly fallen on residential areas rather than security or military targets. In a YouTube video released on October 21 by the Capital Shield Brigades, the speaker announces that they are firing locally-manufactured rockets at “shabiha groups in Jaramana in retaliation for the shelling of Eastern Ghouta.”

It’s not known if these attacks resulted in any casualties, but several local media sources, including some opposed to President Bashar al-Assad such as the Jaramana Coordination Committee Facebook page, report that opposition shelling  regularly injures civilians – including women and children. Shells have also fallen almost daily on other districts in Damascus under regime control, including Bab Touma, Abu Roumaneh, Al-Qassaa, Al-Abbassiyin, Al-Umawiyyin and Mazzeh.

Opposition forces in Ghouta have attempted to enter Damascus via Jaramana numerous times in vain, but are now on the defensive after government forces made advances south of Damascus. Shelling, however, has continued.

Before the crisis, Jaramana was already a crowded suburb of mostly Christians and Druze residents.  Now it has absorbed thousands of displaced Sunni Muslim refugees from Ghouta who support the revolution. Several local residents have expressed their anger with the Ghouta militiamen, saying that they have not acknowledged Jaramana residents’ good will toward the refugee families from Ghouta.

“We welcomed their women and children into Jaramana, and they repaid our generosity with violence,” said Motaz.

Amer, 36, is a father of two children who were injured in October when mortar shells fell near their school in Jaramana. He suggested that opposition militiamen are no longer fighting against government troops.

“If they are waging a war against Jaramana, they need to say why and see the consequences of their actions,” Amer said.

“[Militiamen] are unable to see the residents of Jaramana and the other areas they shell with their murderous weapons as anything but a faceless group of shabiha obedient to the regime,” said Sumayya, 40, a teacher. “No one sees the huge relief efforts that Jaramana has made since the beginning of the crisis or the aid we have extended and continue to extend to all the displaced.”

Then there are the displaced from Ghouta, who see things somewhat differently. Imad, 42, a basketball trainer at a sports center, said that he strongly supports shelling areas under government control, even if those shells should fall on residential areas. “The regime has killed Syrians and destroyed the entire country in order to remain in power,” he said. “The army, which is supposed to serve all Syrians, has used its weapons to murder its fellow countrymen.”

Imad says Syrians in areas under government control have remained silent about the shelling of civilian areas controlled by the opposition.

Raeefa, 41, spoke of the “massacres committed by the Assad Army” in Al-Qaboun, north of Damascus, before she lost her home and fled to Jaramana.  Raeefa worked in a sewing factory before being displaced, and said  she supports the shelling of areas controlled by government forces as a means to win the war against the regime.

“This is the only remaining solution in the absence of any adequate support for the opposition,” she said.

Between the residents of Jaramana, many of whom support the regime, and the displaced from Ghouta who favor the opposition, Rami, a 26-year-old English literature student, said he is neutral to both sides of the conflict. Rami’s mother was killed when mortar shells hit the government-controlled Qassaa neighborhood in Damascus. “I used to be with the Free Syrian Army; I thought they were protecting and defending us, but I still can’t quite comprehend what happened,” said Rami, adding that the shelling did not hit any government positions.

“I no longer want anything from anyone. I just want my mother [back], and I want her now.”