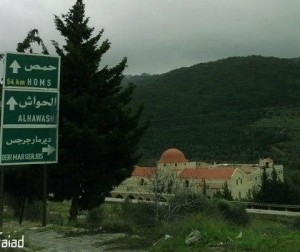 This past July, around 50 frightened Christian villagers in a town in an area of western Syria known as the “Christian Valley” gathered in a hall next to the town’s orthodox church. The village priest stood before them, and peered at the tired and anxious faces in the crowd as they looked to him for answers. The congregation wanted weapons to defend themselves.

“Whom shall we arm ourselves against?” he asked to his audience.

The question came during a meeting of a local social welfare association to address death and kidnapping threats that many of the parishioners had received. They accuse Alawite thugs from nearby towns of making these threats, as a punishment for not joining the fight against the opposition. They also fear Sunni militiamen from nearby villages, although they have not attacked the Christians here. Still, the fighting rages between opposition fighters and the government’s soldiers only 20 kilometres away.

This group of Christians has yet to pick up arms or to organize themselves into one of the militias, called “popular protection committees,” common in Alawite, Druze and other Christian areas in Homs governorate, and other government-controlled areas Syria.

The priest, known for his wit and strength of character, has earned the trust of both the Free Syrian Army, as well as the Popular Committees of the regime. So far, he has been able to resolve issues with minimal loss. Now he saw the need to put an end to the on-going debate about whether the Christian villagers should arm themselves, and if so, who they would be arming themselves against, exactly.

The village of 6000 people is nestled next to several Alawite, Shiite and Murshidiyya (sects closer to the Alawites than to the Sunnis) towns. But the situation for the Christians is as disparate as that of all the Christians in Syria, who don’t monolithically follow a single party or person, but represent a multiplicity of viewpoints.  Some support the revolution, others support the regime, and many others remain neutral, fearing that the situation will turn against them at any moment.

Some villagers joke that when they wanted to protect their village in 2012, when battles inside and around Homs erupted, they armed themselves with construction and agricultural tools and set up a checkpoint at the town’s edge. No kidnappings had yet taken place then, but people were worried about the state of chaos.

They dismantled this checkpoint when the regime-supported Popular Committees from the neighbouring Alawite villages and the army came from outside the village to set up their own checkpoint nearby, close also to the nearby Alawite villages, in order to defend against any attacks by Sunni opposition fighters.

The villagers first started the discussion about arming themselves when the Baath Party and Syrian Socialist Nationalist Party offered them weapons.

Although the late minister of defence, General Daoud Rajha, was a Christian (he was assassinated in July 2012), Christians generally have not joined the Syrian military and security forces since Syria’s independence in 1946. This village is no exception. Outside of the compulsory military service, the village has discouraged its sons from pursuing a military career.

“Christians know their limits very well, and promotions in the army are given out on a sectarian basis,” said a Christian army colonel from the village who left the service two years ago. “Since Christians don’t demand that right, either out of fear or out of the sense that they are second-class citizens, they won’t lift a finger right now.”

The ex-officer says he left the service when he realized he could no longer be promoted.

“I had come to the limit of what was possible for me, and I knew one day I’d find an Alawite guard under my command suddenly rise past me in the ranks, giving me orders, only because he’s an Alawite.”

Despite the fact that the fighting in Syria has not directly affected the village, threats and rumours have placed the Christians in a cycle of fear and anxiety, terrified at the prospect of radical Islamists taking control of the country after ousting Syrian President Bashar al-Assad’s regime.

“If the regime falls, the Muslim Brotherhood will come in instead, and they will strip us of the life we know,” says Osama, 45, a father of two. “They’ll interfere in the way we live, curtail our freedoms and consider our women spoils of war that their faith has given them right to.”

They also fear the regime.

“It’s a murderous regime, and they won’t hesitate to burn us all,” says Salma, a 33-year-old architect.

The Christians have tried to stay neutral, but this position has not protected them from being kidnapped and held hostage for ransom. None of the villagers have been killed, but there were kidnappings that ended by paying a ransom. Alawite shabiha have been accused of being responsible for the kidnappings.

Some of the villagers categorically refuse the option of arming themselves. So, villagers conducted an informal poll that showed more in favour of arming acquiring arms than not. Then, the priest stumped them with the all-important question: “Whom will we arm ourselves against?”

“Will we arm ourselves against the nearby Sunnis? To get to us they have to first pass through all the neighbouring Alawite villages, and if they do manage to pass through and get to us, we won’t be able to fight them with the limited weapons we’ll have.”

“If we’re fighting the Alawite villages it means we’re fighting the whole government, and no matter how strong our weapons are, we can’t stand up to that. And we have to ask ourselves another question: who among us will carry these weapons? Who will willingly give them to their sons?”

His interjection finally calmed the debate. It was clear that the threats to the village, perceived to come from both opposition and pro-government fighters, would not be held at bay by any weapons.  The priest reasoned that it was better for the village to face possible threats through neutrality.

Bassam, a 30-year-old resident of the village, suggests that the nearby Christian town of Marmarita suffered an attack in August because it formed a local militia. Pro-government media reported that Al-Nusra Front killed around 15 government militiamen during that assault.

“The real threat is the war profiteers who are trying to benefit from the situation and drag the whole area of Wadi Al-Nassara into the conflict,” said Bassam. “If they really wanted to protect us, they would send in the army, not ask the people in the area to take up arms when they have no experience in anything of the sort.”

The questions and fears are many. For now, the village might be safe—but not from anxiety, obsessions and apprehension.