Yassin Swehat writes for The Syrian Observer how ISIS managed to control the city.The photo shows a huge banners in Raqqa that orders women to wear hijab 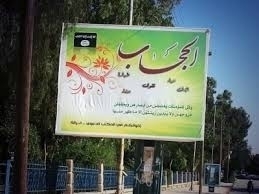 By the time ISIS appeared as a movement in the middle of March 2013, the city of Raqqa was not doing very well. It had fallen out of the regime’s control a month before, and the Hafez Al-Assad statue in the district square—the largest statue of the senior dictator in the country—had been knocked down. The Assad regime had begun to withdraw from the city, taking all the state signage with it. The activists in Raqqa tried to administrate their public affairs through self-administration, but only succeeded in consuming twice the allotted budget funding. The self-administration of a small city like Raqqa could not last long. It was an attempt at resistance while waiting for either the rebels or the national associations to do something to facilitate the administration of the only district fully liberated from regime control. Neither the national associations nor the rebels came to offer assistance. Then, as the armed chaos appeared, things gave way to the Islamic State of Iraq and Sham—shortened in English to “ISIS.”

After the regime’s retreat from Raqqa, the city first came under control of the Islamic movements of Ahrar Al-Sham and Jabhat Al-Nusra, in addition to other armed movements, many of whom belonged to the Free Syrian Army. Ahrar Al-Sham was one of the strongest movements in the city, and it still is. Nothing changed in the middle of April except that the inhabitants of the city went to sleep with Jabhat Al-Nusra in their city and woke up to ISIS. Meanwhile, more problems arose from the lack of resources, services started to deteriorate, and the armed chaos and destruction of public property continued. The atmosphere was encouraging for new initiatives and popular movements, especially the ones started by the youth. Dozens of activities, such as exhibitions, fundraising markets and plays were held. Associations and organizations also held courses and educational trainings. Groups such as the “Haqqana (Our Rights) Movement,” and the “Assembly of Free Men of Raqqa” filled the atmosphere with joy. This freedom lasted until ISIS came to power and started spreading, bringing suffering to the people, both civilians and military.

Negotiations between ISIS and the activists and youth assemblies began as a competition over the general symbolic atmosphere in Raqqa, with ISIS trying to cancel some initiatives planned by the Raqqa youth, like decorating walls or raising the revolutionary flags where the Salafi Islamic symbols were placed. This kind of negotiation started verbally but turned violent, with ISIS kidnapping individuals and executing two people in the public square. There were rumors that ISIS members were actually regime soldiers who did not hide their desire to spread fear among the people of the city. Later on, there was an armed clash between ISIS and members of the Free Syrian Army in Raqqa, notably the “Ancestors of the Prophet” fighters.

ISIS then began to employ even worse forms of oppression, which started with the arrests of young activists. The group escalated their tactics, evidenced by their kidnapping of Father Paolo Dall’Oglio in June just two days after he arrived in the city. The city’s youth celebrated his arrival with a large public welcome event. Less than three weeks after Father Paulo’s detention, ISIS destroyed the “Prophet’s Ancestors” group belonging to the Free Syrian Army. ISIS also stormed the group’s headquarter and erased every sign of their presence from the city. When people publicly protested the attack, ISIS shot at the protestors, causing injuries. ISIS also kidnapped the activist journalist Mohammad Nour Matar.

There is a lot of mystery around the relationship between ISIS and Ahrar Al-Sham, which is considered to be one of the strongest armed Islamic movements in Syria. Members of ISIS do not hesitate to announce Ahrar Al-Sham as unbelievers, while always trying keep disputes within certain limits. Ziad, who comes from Raqqa and spent time in both regime and ISIS prisons, thinks Ahrar Al-Sham has more power in Raqqa than ISIS. However, he thinks Jabhat al-Nusra doesn’t want to open up a war that, though they might win in Raqqa, would result in losing power to ISIS in other areas. It can be clearly noted that, even with all the political pragmatism going on, the ideological convergence between ISIS and Ahrar Al-Sham is high.

That said, most of the fighters with ISIS are foreign jihadists, Ziad indicates. The Syrian fighters, however, are one of two kinds. The first kind are extremists who come to fight for religious goals, and the second one, which is more common among Syrians, includes the shabiha, smugglers, and “baltagia” (including mercenaries). Those in the second group have found a way to cover up their activities under the banner of ISIS; they put a religious hat on their previously illegal activities. For instance, taking over public and private properties has become part of ISIS’ daily routine. Ziad further explains that while they seize civilian properties using silly excuses (including being a different sect, or having been employed by the regime, which they term “the unbeliever government”), ISIS still protects the properties of some former Assad regime officials because they happen to be relatives of the amirs of ISIS. This was the case with Ibrahim Henedy, the former member of the Baath party’s national leadership.

At the end of last September, ISIS broke into a church in Raqqa, burned it, took down the cross, and replaced it with their flag. Up to that day, no church in Raqqa had been touched, even with the presence of Jabhat al-Nousra. A group of activists protested against the ISIS action, and ISIS violently confronted the protest and started shooting into the air. Two days after that, ISIS members fired on Souad Nofel, who was protesting daily asking for those kidnapped by ISIS to be freed. Fortunately, the shots missed, but Nofel has been forced into hiding.

In the past few weeks ISIS has begun restricting people’s business to the same degree that the Assad regime had, only this time it is framed in militant Islamist terms. The general civil movements and activities are no longer possible, having become a target for arrest by ISIS, whether they are foreigners or locals. That is what happened to Abdullah al-Hussien and Abdullah al-Moushref, who were activists in the revolution from its very beginning. They had both suffered detention in Assad’s prisons before being detained and held by ISIS after the group kidnapped them in the beginning of October. Al-Moushref is an activist who played a very important role in organizing students’ activities in the city of Raqqa, which lead to his detention for a few weeks in Assad’s prisons before the liberation of the city. He has been released after being kidnapped and tortured in ISIS prisons. However, Mohannad Habaybna’s dead body was found near the outskirts of the city, showing signs of torture. Habaybna was another activist who was very well known and loved by the people of Raqqa. He had played an important role in organizing the civil activities with other youth of Raqqa over the last three years. His killer remains “unknown” and no one is certain about who it is, though all fingers point to one place: “The Palace of the Governance,” which currently serves as the ISIS headquarters in Raqqa.

The latest activity from ISIS includes its decision to ban women from wearing pants. Instead, they must wear the “legitimacy cloak” that covers them. That came along with their decision to close all of women’s clothing stores and to ban perfume. Previously, ISIS had sent patrols to prevent the mixing of genders in the educational institutes and even in the streets. Now, they are trying to take this role to a higher level, by trying to fulfill their boundless thirst for domination.

Thus far, it does not seem that ISIS will stop abusing the people, who continue to suffer. The majority of the young activists are hiding out of sight, and many others decided to leave the city. But is it not enough to repeat the phrase that Raqqa has become the “Tora Bora” of Syria. The self-ridicule does not solve the problem. There are many responsibilities that must be filled and duties that must be carried out instead of simply accepting that Raqqa becomes just another piece of cake on ISIS’ plate. The question then becomes, “what do we do?” This question should be answered by the politicians, human rights activists, and the revolutionary armed groups.