Education came to a halt in the city when opposition forces took over some of the schools as military bases, while others became shelter for thousands of refugees 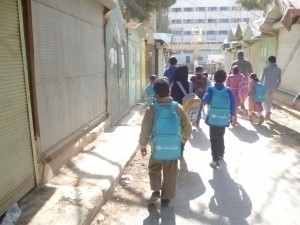 Thirteen-year-old Mahmoud was excited to return to his eighth grade classes in September in the north eastern Syrian city of Raqqa, after more than six months of closure.

“I was so happy to go back to my desk. I missed my classmates and I missed studying,” he said.

Mahmoud resumed classes at the “Mutafawiqun” School, a public school specialized in serving gifted youngsters. The school had been closed since the armed opposition seized control of the city on March 14 of this year.

Despite the fact that the Ibn Tufail vocational school in Raqqa was bombed by government warplanes on the morning of Sunday, September 29, 2013, Mahmoud went back to scheduled classes like many other students in the city.

Ibn Tufail students were massed in the front courtyard of the school, getting ready to enter, when two regime-launched missiles landed, killing 14 students.

Some students have stopped going to school, and many parents share the sentiment of one mother, who said she is waiting for “the situation to calm down.”  She has kept her children home since the bombing of the Ibn Tufail school.

Mahmoud’s cousins have  not attended school since classes resumed in September and are being tutored privately at home instead.

Reem al-Ajaji, 35, Mahmoud’s mother, spoke of her sister’s terror, and how she deems it “suicidal” to send her kids off to school.

“I’m also afraid for my own son, but I think he needs to get on with his education, and I ask God to protect him,” she said. “Only that which is written will happen, and it’s not only the schools that are under attack but all of Syria.”

Education came to a halt in the city when opposition forces took over some of the schools as military bases, while others became shelter for thousands of refugees.  Schools only reopened after an agreement between the Education Office of the Raqqa local council and the larger Board of Education, part of the Ministry of Education in Damascus, which answers to the Syrian government.

The local council managed to move the fighters out of the schools and renovate them.  The council also assigned six schools as centres for refugees and redistributed the refugee population in the town to those locations.  Meanwhile, the Ministry of Education provided schoolbooks and teachers’ salaries, the latter of which were frozen for over five months. The teachers received all their pending salaries for the last few months at the beginning of October 2013. For this they had to go to Deir al-Zor, a city partially under regime control, where all of Raqqa’s teachers receive their salaries through coordination between the accountants of the Ministry of Education in Raqqa and their counterparts in Deir al-Zor.

Mahmoud, 29, a primary school teacher in Raqqa, expressed his fear about traveling to Deir al-Zor.

“I’m afraid of the security situation there, so my brother had to go and collect my salary for me,” he said. “It took a long time for our salaries to arrive, and in that time, the world has narrowed for me and my debts have accumulated.”

That’s creating problems for Mona Freij, 30, who is wanted for her activity in civil opposition. She continued teaching in Raqqa despite not receiving her salary.

“They can deprive me of my salary, but this will not mean I’ll stop teaching, because my duty to my students in light of the lack of teaching staff is more important than any material concerns,” she said.

The issue of school supplies was solved by UNICEF, which donated 60,000 schoolbags equipped with notebooks, pens, and other scholastic necessities to the department of education in Raqqa, which distributed them to the students in their schools.

Mamdouh al-Ahmad, the head of the Department of Education at the Raqqa local council, explained some of the administrative procedures the council took to keep the schools running.

“We worked on creating a Higher Education Authority in order to manage the schools and deal with the situation,” he said. “We also put together the Free Directorate of Education that comprises the former Department of Education as well as the Exam Board and the Free Teachers Association.”

The Free Teachers Association consists of teachers who have been active in re-forming the educational infrastructure in the city, while the Free Directorate of Education takes care of administering and supervising exams, as well as managing faculty schedules.

The Higher Education Authority gathers together representatives from the Syrian government’s Department of Education, as well as pro-opposition organisations such as the Raqqa local council, and from some of the opposition armed factions in the city, which include the Syrian Islamic Liberation Front and the Islamic State of Iraq and Syria, ISIS. The latter recently withdrew its representative from the education authority since, according to Ahmad, they have their own educational projects. He went on to say that members of ISIS gave a seminar in most of the local schools and once explained the Islamic concept of education. But the organization has not interfered so far in the educational process, and Ahmad was quick to squelch any rumours that they would be establishing an “Islamic State” in any of Raqqa’s schools.

There are around 100 schools in Raqqa, 30 of which are closed due to severe damage incurred from shelling, vandalism or theft. The education department at the local city council managed to rehabilitate another 30 schools across the city.  They funded the rehabilitation with donations from local residents.

“We didn’t receive any support from any organization, even after schools resumed,” said Ahmad. “But recently we’ve received some small sums from the Syrian Business Association as well as the National Opposition Coalition, which have helped some.”

Other schools remained undamaged and were able to resume function without any need for rehabilitation.

Mahmoud, the student at Mutafawiqun, began his school year by reviewing last year’s curriculum, which he was unable to complete, then by taking matriculation exams to move him up to the eighth grade. There have been some changes to the new curriculum: the students no longer take a course on national socialism, which once taught the constitution and principles of the Arab Socialist Baath Party.

The school schedule has been compressed to four periods, down from five or six, after the omission of “recreational” subjects like music, physical education and art, due to fear of the security situation and the belief that the schedule ought to be pared down to its bare essentials given the circumstances.

Most schools suffer from a lack of teaching staff, and according to Mahmoud, he has only two teachers who cover all the subjects, from science to social studies, Arabic language to religious education. Mahmoud’s school and others have dealt with this problem by hiring more part-time teachers, who work on a temporary contractual basis.

Abdel Basset al-Hussein, chairman of the Exam Board and part of the opposition, says one problem is that many teaching staff were displaced, along with many other residents,  after the opposition took control of the city.

Mamdouh al-Ahmad says that some of the teachers who remain in Raqqa have failed to resume work due to the lack of adequate control. But the Free Directorate of Education assured that it is doing everything to maintain oversight on all schools and has reported absent teachers to the government Department of Education in order to “punish them through the Ministry of Education by reducing their salaries due to repeated absence.”