Some are manned by the regular army, while others belong to the Syrian security services or their militias 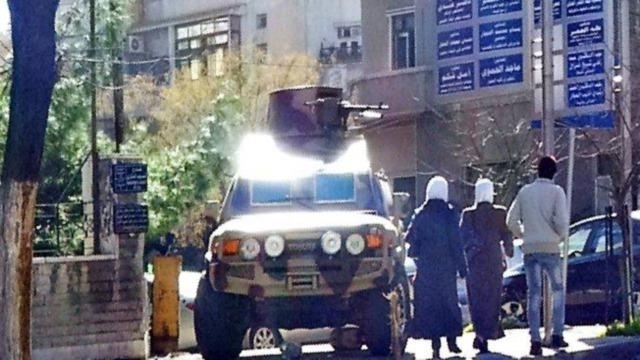 Checkpoints are everywhere in Syria, on every street corner and at the entrance to every alley and neighborhood.

Some are manned by the regular army, while others belong to the Syrian security services or their militias. At the checkpoints there are always a number of soldiers, sand barriers and cement bags, banners and photos of their leader.  A distance that used to take minutes to travel noe requires the whole day.

On the way to the center of Damascus, long before the bus, loaded with passengers, arrives at the checkpoint, the driver alerts us: “Guys! Prepare your identity cards for inspection please!”

‘The identity cards are ready for inspection, Madam Crisis,” I tell myself.

The inspecting soldier, with his military uniform and his gun seems to be saying: “I am ready to implement all the orders I receive.”

On the other side of the road a banner hangs over the sand bags bearing a picture of the President, under which the words are written: “If not for the fear of God, I would worship you Bashar, although you are human being.”

With a voiced tinged with fear, the driver greets the soldier, saying: “Peace be upon you.”

The soldier chides the driver, as if defending his accidental authority as prestige, and shouts in his face: “Who told you that I need your greeting? Keep your salutation for yourself, I don’t want it. Now hurry up and give me the identity cards.”

People in the bus exchange glances showing a range of different responses. Their features reveal their attitudes towards the behavior of the soldier. Disapproval dominates, but is masked behind complicit yellow smiles.

The soldier collects the identity cards, checking them over with glinting eyes. He stops at one of the cards and asks: “Who is Abdul Jabbar?”

A young men replies with a firm voice from behind me: “Me"

In haughty tones, the soldier tells him: “Are you from Khan Sheikhun?”

The soldier asks: “Why are you here?”

The face of the young man turns red as he answers: “I’m displaced.”

“The terrorist gangs destroyed your home, right?” the soldier asks.

The soldier asks another man: “This photo on your identity card doesn’t look like you, why?”

The man tells him that the photo was taken five years ago.

The soldier tells him he seems even older.

“Yes, in the last two years we became many years older than we really are,” the man replies.

The soldier throws the card in the face of the man, who catches it at the last moment.

When he has finished checking all the cards, the soldier nods and indicates to the driver to move on: “Go! And I wish you all could not go back to your homes."

The bus rolls on, and the passengers watch the river Barada that flows silently, defying nature in this time of year, out of the windows. Before long, we have reached another checkpoint and the driver alerts us again: “Guys! Prepare your identity cards, please.”

The soldier leaves his gun on one of the cement bags that supports another banner glorifying the leader.

He gets on the bus armed with a warm smile and greets the passengers: “Peace be upon you!” Some of the passengers reply cautiously, while others watch him silently.

While the soldier is collecting the identity cards checking them separately, he inadvertently steps on the foot of one of the young men crowded beside him. “I’m so sorry. Forgive me, please, dear,” he apologizes.

“Don’t worry… nothing happened” the man who was trod on replies.

The soldier finishes checking all the ID cards, but one of them attracts his attention. He asks its owner: “Are you from Homs?”

The young man, whose cheeks seem a little pale and his gentle features show a sad pride, replies that he is. The soldier bows his head and keeps silent.

As the soldier returns each of the cards, he tells each person: “Here you are dear.” Then he gets down from the bus saying: “Go. May God bless you with health and may he protect you."

All the passengers reply, shouting: “May God bless you with wellness. May He protect you!”

The bus continues its journey to the center of the crisis, passing many other checkpoints. At one, the soldiers remove one of the passengers, tie him and cover his eyes with a blindfold, ordering the other passengers to keep silent and close their eyes.

The bus leaves the checkpoint again, and the passengers watch columns of smoke rise in to the sky on the horizon and a flock of scared swallows fly across the sky.