The people under siege tried to find replacements to bread, and animal feed was their only choice 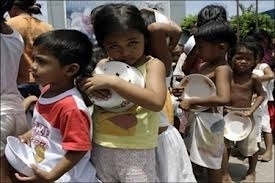 One of my friends in the besieged Eastern Ghouta region of the Damascus countryside told me about the bread made of [animal] feed; it’s the only substance available to keep people alive and to delay the deaths of thousands of civilians by hunger, while all of humanity is watching.

Entire cities are under siege in Syria. There is no movement of food or medical materials, either in or out. They have been collectively punished because they rejected the Assad regime and risen up against him.

The residents of Eastern Ghouta, which is the most closed-off area, ask “What should we eat, and how can we stay alive?”

Abu Hesham, father of seven, asked “What will our children eat after this cursed feed runs out?” He added that over many months all the food ran out; the first [to go] was flour.  People tried to find replacements. They ground barley, soya beans, and lentils and baked them to feed their hungry sons. And when all their stores ran out—some were consumed and were others [destroyed in] shelling—nothing was left except some vegetables and herbs to share with their animals.

Muhammad Tooma from Al-Marg village in Eastern Ghouta said, “We’ll die with our livestock because we are running out of feed, I had seven cows and fifteen sheep, most of them died after the cowshed was shelled, and we’re grinding the feed and sharing it with the rest of them.”

The Eastern Ghouta region, which includes 60 towns and cities in the Damascus countryside, requires 170 tons of flour daily for bread. Its population was of two and a half million before the siege, half of them have been displaced according to the local council’s numbers. Today, one and a half million people—nearly 199,000 families—are under siege inside Eastern Ghouta.

Douma, the largest city in Eastern Ghouta, needs 35 tons of flour daily, which has not been available for about six months, says Abu Baker, the spokesman for the United Relief Office in Eastern Ghouta. He adds “the price of one kilo of flour is 50 Syrian Pounds (SYP), while in the Damascus countryside the price reaches SYP 3,000, if it’s available at all.”

The people under siege tried to find replacements, and animal feed was their only choice. The Free Syrian Army got some of it during one of their battles against the regime, and the feed was used with the available vegetables, especially garlic. The price of one kilo of feed was SYP 20, but after the siege it reached SYP 400.

Muhammad says that a few kilograms of feed is like a dream for some families. Ninety-nine percent [of people] are unemployed and there is no money or financial resources to buy or barter; there is nothing left but grass.

For this, green feed bread is considered a blessing, saving thousands of people and filling their intestines, says doctor Majed Abu-Ali from the United Medical Office in Eastern Ghouta, who spoke about the side effects of eating this kind of bread. “This substance forms a good mass for filling the stomach space. But it is not intended for human consumption, so we repeatedly see digestive problems such as indigestion, diarrhea, nausea, vomiting, and permanent headaches at the medical sites these days.” He adds, “The human stomach is unable to digest this material, and the hepatic secretions are unable to fully use it, making it dangerous for the liver. Additionally, it is not clean, which causes fermentation and gastrointestinal ulcers. The physiological and social effects are very intense as well. We see people making jokes about how they are eating feed all day, making animals noises. All this may be translated as a lack of nutritional value.”

Ahmed, a Red Crescent volunteer, says that he is in pain and cries for the hungry families. The Red Crescent organization stopped its work in these areas over a year ago, while all other relief organizations are totally incapable of entering [to provide] aid. The lack of safe passage and the continuous shelling leave civilians to their fate.

Amjad, ten years old, refuses to hold his green bread without cheese in it, and cries. “I want real bead, I am hungry. And this bread is not delicious and it’s dry, my stomach hurts when I eat it.” Amjad sat at the door crying and cursing Assad who took all the sweet things from him, even his father.