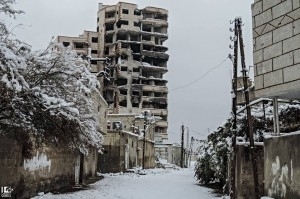 Forty-five-year-old Abu Khaled’s three sons stand in a long line extending dozens of meters on a cold December day in front of a gas station in Qudsaya outside Damascus, hoping their combined effort might get them enough diesel for heating.

“The gas station won’t sell more than 20 litres per person because of the extreme shortage,” explained Khaled, 20, the eldest son. This is why all of us came together so we could get as much fuel as possible, in anticipation of it becoming completely inaccessible during this harsh winter.”

According to Khaled, the gas stations are selling diesel at prices “that change from day to day, ranging between 75 (around 53 cents) and 100 Syrian liras (around 70 cents) per litre, despite the fact that the government had fixed the price at 60 liras (42 cents) per litre.”

Khaled says that the family has no choice but to give in to this “blackmail,” given the extreme cold, and the fact that the electricity is cut off for hours on end, meaning they have to rely on diesel for heat.

The challenges faced by Abu Khaled’s family are not unique; rather, they represent the collective hardship of the majority of Syrian families. In both the areas under regime rule as well as those controlled by the opposition, millions of Syrians are suffering the absence of adequate heating as they face the waves of frost and snowstorms during this harsh winter.

The difficulty faced by those residing in areas under regime control is mainly due to the shortage of diesel fuel and the absurd inflation in its price, which has reached up to 150 liras per litre on the black market, according to Omar, 38, the head of a family of three, now living in Sehnaya after being displaced about a year ago from Yarmouk refugee camp south of Damascus.

“We registered our family early in the summer in order to be able to get the allotment of 400 litres of diesel that the Syrian government promised to every family at the subsidized price of 60 liras per litre,” said Omar. But here we are, in the middle of winter, and we still haven’t seen a single liter of the promised fuel.”

Omar is a government employee in an electricity company, but was forced to take on another job in the evenings because of his low income.

“I repair and install electricity cables in homes and businesses,” he said. “But despite that, my salary is still barely enough to buy diesel on the black market.” As a result, Omar explains that his family relies “solely on electricity for heating, and when the power is cut, we wrap ourselves up in extra clothes and blankets.”

In an interview with the Al-Iqtisadi website, Ali Merhi, the representative for the union of oil workers in Damascus, accused private fuel stations of “smuggling diesel to the black market.” He also indicated that those stations owned by the public sector are under tight government control, which “turns a blind eye to the plants of the private sector and their trade.”

“When I registered my name to be able to get the diesel in May, the price of one litre was set at 35 liras, but the government then raised it to 60 liras, and that was a very high amount with respect to my income,” he said.

At the outbreak of the protests in Syria, the price of a single litre of diesel fuel was only 20 lira, before the government began gradually raising the price in increments. A report by the government-owned news agency SANA in January 2013 claimed that “the low local fuel prices in comparison to neighbouring countries encourages an increase in smuggling fuel to the outside, which in turn means great losses for the national economy.”

Most Syrians are unable to have access to diesel fuel probably because of the decline in their purchasing power. In another interview in November, the head of the Damascus Fuel Workers’ Union said that more than 10 percent the residents of the capital and its surroundings who signed up to receive subsidized fuel have been unable to pay for it.

The director of the government-owned Damascus Fuel Company Suheil Nakhla, indicated in an interview with Al-Iqtisadi in October that 15 percent of those registered for fuel “asked to be able to postpone their receipt of the allotted fuel because they couldn’t pay the required amount during a period coinciding with the beginning of the school year, the time to stockpile winter goods and the holiday season.”

In opposition-controlled areas, where there are no government services and where rockets and shells fall almost daily, the situation is even worse.

“The destruction has affected most of the houses, opening them up to the elements, either partially or totally,” said Sami, 25, a media activist in Eastern Ghouta. For about a year now, Sami has been sharing in the suffering of the residents of Eastern Ghouta, since he fled there after Syrian security forces issued a warrant for his arrest following his participation in the protests and evading military service. Formerly an employee of a food company in Adra in the Damascus countryside, he decided to move to an area outside of the regime’s control.

“Syrians living in these areas will use any available method for heating,” he said. “This includes burning destroyed wood foundations or cutting down any available trees for firewood, as well as burning tires or any other flammable material.”

As for diesel fuel, Sami claims that it is available in most towns in Ghouta, but “in very limited amounts and at incredibly high prices, ranging between 500 and 900 liras per litre.”

“This isn’t the case for all the liberated areas,” he added, explaining that the price of fuel in Ghouta is particularly high because of the siege imposed by government forces.

The National Coalition for Revolutionary and Opposition Forces has called on “humanitarian relief organizations around the world, both governmental and non-governmental, international and regional, to provide rapid, fundamental emergency assistance to the Syrians, to spare the children, women and elderly of dying from the cold.” This comes in the wake of the severe snowstorm that has hit the Middle East, and that has already caused the deaths of several Syrian children in opposition-controlled areas, according a report issued by the Syrian Network of Human Rights.