Doctors say symptoms of this depression range between partial and complete impediment. 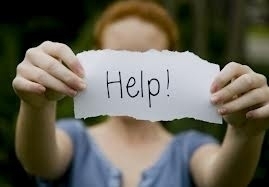 Inside al-Hajar al-Aswad area in the besieged southern Damascus, people are being slowly killed. Alaa, a ten years old girl, reflects deeply the collective depression spreading among Syrian people with her sad cheerless face. Inside one of the destroyed battered bakeries, while she was squatting and gazing aimlessly, she picked up some bread crumbs mixed with broken glass and some ruins residues. She but the crumbs in a plastic bag, then she delved with her fingers into those crumbs, careless for her bleeding hands, like if this body was not hers, or she did not feel the pain.

I asked her about her dreams, she said: "nothing". Then, I asked her why was she here? She looked carelessly at me without giving an answer, she seemed cold, and did not say much, her words were irrelevant, while her ambition was briefed with these words "I dream about nothing".

Psychology specialists say that healing period for children who suffer from this disease in early childhood may take long time, even if they were treated properly. However, if they did not receive the proper treatment, this disease would certainly lead the patient to a choking result which is suicide.

Dr. Ghazwan al-Hakim, a psychiatrist from Damascus countryside, says that he is closely examining the increased cases of collective depression, which have spread among besieged Syrian civilians in a number of areas. Dr. Ghazwan estimated that the disease's incidence percentage is about 20%, whereas the normal incidence percentage is 1-2%, while Dr. Ibrahim Ahmad, a psychiatrist from Damascus, estimates diseases incidence to exceed 60% according to the cases of what he calls "Collective depression phenomenon" which he had examined. Most of these cases are not offered any type of treatment nor diagnosis.

According to Dr. Ghazwan al-Hakim, symptoms of this depression range between partial and complete impediment.

"If we are discussing the mild types of depression, or the so called minor depression, the percentage would be above 40%, and the most common symptoms are: chronic sadness, crying, feeling suffocated, being unable to enjoy the daily activities, sleeping disorder, and the lack of concentration in general. All these symptoms may lead, if ignored, to suicide." Dr. Gazwan says.

Mazen, an eighteen-year-old young man from Yarmouk Camp at the besieged southern Damascus had committed suicide. He ended his life one month ago in a tragic statement for his failure and despair, leaving behind a single mother and three sisters. More than two million besieged people in Syria share Mazen's misery and might suffer from the same depression symptoms as well.

Bayian, a psychiatrist working at a school in Douma city, says that most of the students suffer from depression at different levels. Those children do not have proper treatment programs. In addition to that, no local or even international organization is taking care of them. They cannot play, release their energy, nor restore beautiful memories due to the siege along with the ongoing shelling, while being hunted by the killing, ruff images, fear, and terror. A lot of those children suffer from alienation, constant silence, and lacking the desire to move or react. The outcomes of such serious symptoms are to be revealed more severely in the future.

Dr. Gazwan says:" The child acquires trust from people around him, if he feels that they are scared or the care he is receiving had changed, he would suffer, consequently, from psychological disorders. How could the parents who are exposed to such high level of violence be able to protect their children?!."

The disease main symptoms for children are: academic failure, lack of interest in playing with their colleagues, and usually the child tends to be either very calm or very active and aggressive. All this impedes the mental and physical growth and might cause permanent impediments such as week personality and social withdrawal in the future. However, if adults who are trying to adapt to depression symptoms without getting the proper treatment, usually tend to be hunted by flashbacks and suffer from insomnia. These are the symptoms of post traumatic stress disorder.

Samar, a thirty years old lady, who had to migrate from her neighborhood after the loss of her both, husband and son, when their home was targeted by the regime. She said that she wishes death in every minute to end her misery. Tears were frozen in her eyes while she described her life, she said: "After losing my husband, my son, my job, my home, and my dignity, why should I live. My life have become meaningless. If suicide was not considered a disbelief, I certainly would follow my love ones."

Religious believes might be the factor forbidding a lot of Syrians from committing suicide, but is there a real difference between continuing life with such level of silent disease and death?

"Death might be less painful than this emotional torture I am living," says Samar.

Women, according to psychological studies are the social proportion most likely to suffer from depression. This is what Wafaa Othman confirms, a writer and a Syrian activist:"Most of the women who I got in touch with are depressed at different levels, especially in camps and refugee areas. Depression have led them to embrace severe behaviors similar to suicide, like accepting to marry much older men, embracing a life of grieve, despair, and social withdrawal, and neglecting themselves. This impacts their children as well.

On the other hand, Dr. al-Hakim sees that incidence percentage is growing steady among men, being the main responsible for social and military roles, which rang between defending their families and providing their essential needs in such terrible conditions. Many of those men had seen their children die in their arms, while being unable to save them.

Numbers of refugees and Syrian immigrants were estimated by international organizations to reach 10 millions. All of those people are living in poor conditions, away from their cities, homes, and their country.

Conditions like poverty, humiliation, disease, and lost, would form a perfect environment for mental illness and depression which will impact on the long term.

Those people had lost more than one million martyrs since the beginning of the revolution, due to the shelling, fighting, and severe violence, leaving behind, their families and love ones. On the other hand, there are more than 500 thousand detainees held by the Syrian regime, suffering from serious physical and mental unimaginable damages without receiving any kind of medical care.

The ones who were released from prisons usually suffered from various diseases, and acute depression is on top of it, let alone their devastated families. These conditions lead us to consider depression as another deadly weapon killing Syrian people and destroying their lives.