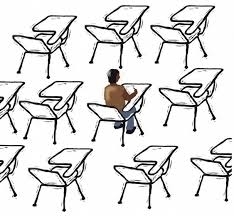 Aerial bombing has become a staple of the struggle between the warring factions in Syria as a means of disrupting daily life in the opposition’s territory and increasing casualties. The greatest damage inflicted has probably been to civilians, especially children. There have been dozens of aerial attacks on schools in the last three months that whose results have ranged from the destruction of schools to the fatally injury of students.

The latest and most damaging bombing occurred in Bab Touma, [hitting] a school bus taking children home in the very heart of the capital, Damascus. Five children died along with dozens of passers-by. This so alarmed parents that many have completely abstained from sending their children to school in order to protect them children from danger. In general, sending kids to school depends on the degree of violence of the previous night’s skirmishes. After a violent night, many will keep their children at home the next day.

Um Rama has only sporadically sent her daughter to school for about a month. She believes that school has become a risk and the safety of her child is far more important. Suad, a schoolteacher in Damascus states that the increase in bombing has led to more student absences at school. This has affected their academic levels and requires extra work from parents. She adds that, “absent students are not asked for excuses these days. The school administration is well aware of the parents’ fears. They wonder ‘how long can this go on?’”

The Syrian Ministry of Education, for its part, insists that students should attend school and refuses to allow absences for any reason. They stubbornly refuse to admit there is any danger to the pupils. The only measure they have taken is to provide a few services at schools’ opening and closing times, ignoring the fact that most school buildings lack safe areas, emergency vehicles, or even fire extinguishers. They are not able to ensure security for the pupils or the school buildings.

Jaramana, a suburb near Damascus that remains firmly under government control, is exposed to daily rocket assaults. Hardly a day goes by when the city is not attacked by bombs. These [attacks] do not differentiate among schools, hospitals, or civilians’ homes. The city has recorded more than 20 bombs that have struck schools and injured dozens of children. The city has been forced to face the reality of its situation. Parents have begun to keep their children home from school because they believe schools are being targeted as a war tactic, especially after the bombing of an elementary school left more than 30 pupils injured.

Leith A. wanted to take his 11-year-old daughter Nancy out of school after it was struck by a bomb. He reasoned that she would be safer at home and refused to listen to her teacher who advised him to let her stay in the school courtyard if bombs struck again. Instead, Leith was taking Nancy home when she was killed after being stuck by another bomb. Leith suffered grievous wounds and nearly died himself. He says, “I lost my 11-year-old daughter because of the school. It is surely God’s will, but I am consumed with regret. I realize now there is nothing more precious than the safety of our children.”

Many are refusing to send their children to school in this brutal war despite the fact they know they are not much more secure in their own house. Many children have died at home. Still, parents will do what they think is best for their offspring. There is no security anywhere anymore. Frankly speaking, there are people living in other shattered towns where there are no schools left at all and there are huge numbers of students who haven’t set foot in a school in two years.