According to official statistics, a quarter of Syria's workforce is employed by the public sector 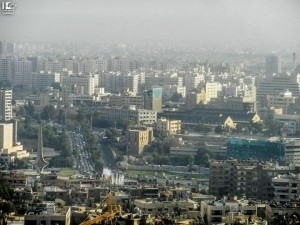 Rami is a member of Syria’s sprawling government bureaucracy who feels stuck in the rut of his government job. Four years after the 29-year-old was hired at the Ministry of Finance in Damascus, he found himself under financial strain and bureaucratic constraints.

“Government salaries are minimal,” said Rami, who asked his full name not be used due to the security situation in Syria. “They are for those who plan to remain bachelors and dependent on their families for the rest of their lives. I cannot be myself in this place.”

Rami says that a year into his position, he became despondent over the low salary and the meaninglessness of the work. He wanted to quit. But, he considered that at least he had a job as millions of other Syrians were out of work, trapped by conflict or fleeing their homes.

“In the end, the uprising and the deterioration of the economic situation made me decide to give up my decision to quit and look for a job in the private sector,” he said.

For decades, government workers in Syria have received modest salaries that are barely enough to sustain daily life, compelling many to seek additional work to fill the gap. The situation only deteriorated after the start of the uprisings in March 2011, with the rapid inflation and devaluation of Syria’s currency, causing a sharp rise in prices for various goods and services.

The median monthly salary for government workers in 2010 was around 260 US dollars. Their salaries increased in 2011 to around 340 dollars when the government raised public sector wages after the protests erupted. It increased again in mid 2013 by around 33 percent. Since April 2011 until today public sector salaries have gone up by around 65 per cent, whereas prices have increased from between 100 to 300 per cent according to the Syrian government’s General Commission for Competition, which monitors wages and cost of living.

According to an official report released in 2011 by the Syrian government’s Central Bureau for Statistics on the distribution of workers by level of education, gender and industry for 2010, 1.36 million of around 5.54 million Syrian workers are employed in the public sector.

“The deterioration of the purchasing power of our salaries is palpable when we exchange our monthly wages to any other stable foreign currency,” said Abu Hussam, 46, a government worker and head of a household in Damascus. “At the beginning of 2011 I used to make around 300 dollars, but in 2012-2013, this went down to between 70 and 120 dollars only. With the slow improvement of the exchange rate, my salary has increased to around 165 dollars. How can anyone support their family with such an income?” he asked bitterly. “It is impossible. This is what led me to work nights as an accountant in a private company that sells olive oil since I got married ten years ago,” he added.

Government workers also have to deal with another hardship related to the tightening of security measures for public sector employees, including a ban on travel. In order for them to leave the country, they must receive security clearance from their place of work. Many times their clearance is refused.

Another government employee, 28-year-old Amer, works at the Ministry of Finance. He is originally from Daraa but now resides in the Tabbalah neighbourhood after he and his family fled from the Hajar Aswad neighbourhood south of Damascus. His family currently resides with his parents in Daraa. In 2013, Amer presented a written request for permission to travel to Jordan to accompany his mother for a medical treatment.

“My supervisor told me that the request would go to the Political Security Branch. A month later, a security agent came to my workplace and asked me about my place of residence at the start of the uprising and currently, as well as that of my family and relatives,” said Amer. “I was surprised two weeks later when another security agent visited my parents’ house in Daraa and asked my father similar questions. After three months of waiting, they refused to give me clearance and I was unable to travel.”

Ahmad, 35, had to resign from his government job in mid-2013 after seven years of employment because of his low salary and a desire to find work abroad. He travelled to Irbil in Iraqi Kurdistan.

“I did not apply for permission to travel since many of my colleague’s requests were denied. I simply resigned and a week later went to the Directorate of Immigration and Passports in the Marja area in central Damascus to find that my name had been removed from the no-travel list,” he said.

“At the end of 2011 after many people defected from the Syrian regime, all employees in my workplace were forced to sign a paper stating that they were barred from traveling out of the country without permission from their place of employment,” explained Ahmad. “A government job was like a prison restricting my movement, particularly in 2012 and 2013. With the increase in unemployment, the closure of many private sector companies, and the denial of travel, getting rid of a government position became very difficult,” he added.

Another employee, 45-year-old Zuhair was one of those employees who managed to secure permission to travel.

“I applied for permission from my workplace. Two weeks later I received a positive response and travelled to Lebanon for a week, after which I returned to work,” he said.

Zuhair said the difficulty in obtaining permission differs according to the ministries, the job and the applicant. He said in particular, there is sensitivity in certain ministries towards allowing their employees to travel, such as the ministries of finance, economics, interior, and the foreign affairs.

“Ministries that allow their employees to travel more easily are those with less influence or those not related to state security or sovereignty, such as the ministries of education, agriculture,  housing and tourism,” he added.

Despite this, there isn’t much talk of “special privileges” for employees of certain ministries. What is widespread, however, is an understanding of shared hardship that begins with low wages and unfortunately doesn’t end at tight security measures that besiege the vast majority of Syria’s government workers.