Over 1 million people, half of them children, are trapped under a suffocating siege in eastern Ghouta in Damascus countryside 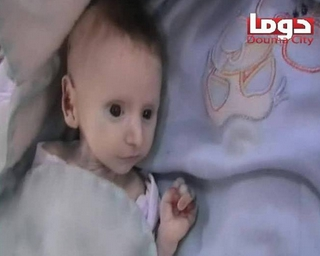 An elder girl enters the field hospital carrying a younger one, hoping that someone can help her retrieve the stolen life. The mother no more than 19 and the child she carries is pale, not breathing.

The mother looks around for a savior in the poorly equipped field-hospital, still fighting to operate despite the shortage of everything except patients. The hospital still receives patients and gives them the available first-aid. Malnutrition has turned the child's body into a skeleton covered with pale skin.

The mother drops the tiny body on a leather seat and begs the doctor to help her dying child. She herself is about to collapse from clear  malnutrition.

The doctor enters; he does not look too good either. He passes the stethoscope over the thin body and asks the mother some questions; but the  sight of the young child's body provides all the answers; pronounced hunger, projecting bones, white eyelids and pale skin  –  skin that looks like paper with blue and yellow lips.

"Acute malnutrition. What do you feed her?" he asks.

It is a painful question to a mother surrounded by poverty in a besieged area.

"I have three children, she is the youngest. I boil lentils for them, and I feed her with lentils soup instead of milk. Sometimes I boil some herbs and feed her with the water," she explains.

"My breast stopped producing milk four months ago, after a rocket fell in front of our house and killed my husband. My breasts have dried up since that day," she says.

"Didn’t you feed her with milk alternatives? Didn’t you try to compensate?" the doctor asks, and the young mother smiles with tears in her eyes.

"We can hardly get drinking water, from where would we get milk? You are among us and you know that it is an unattainable treasure. I stooped breastfeeding her since the accident."

The doctor is silent now and the eyes of the mother are fixed on her child. Her heart is fragile and broken. She expects news from the body of her dead child. The doctor utters the familiar sentence: "It's too late".

This is a normal scene in this remote area of the world, an area besieged by government forces since October, 2012. But since the siege tightened in the last five months and all entrances were blocked, nothing enters this place; not food, fuel, electricity, water or communication.

Over 1 million people, half of them children, are trapped under a suffocating siege in eastern Ghouta in Damascus countryside, according to the statistics issued by the local councils.

The statistics showed that 43% of the besieged residents are children and those are suffering from hunger, lack of milk and food. Bread in these areas has become a dream.

Mothers try to compensate by feeding their children with boiled herbs and available vegetables. The lack of medicine, especially serums and anti-vomiting medication adds to the problem.

Seven children have died in Duma alone in eastern Ghouta.