A young man kisses a sweater belonging to his father, who was stuck underneath the rubble after an explosive barrel fell on his house in Aleppo 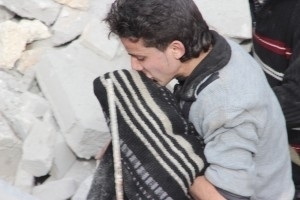 Three helicopters hover over the city, as well as several fighter jets.

I couldn’t find a place to rent, so I spent the night with a friend at his military base in the Mashhad neighbourhood. The area is adjacent to two active front lines, the Salaheddine and Saif al-Dawla neighbourhoods.

The military base begins to shake. Seconds later I am outside, running towards the destruction.

Fridays in Aleppo are no longer about tranquil days and family visits. Like all other days, they have become imbued with terror and the expectation of death that Bashar al-Assad unleashes on Syrians from the sky.

I walk down the stairs thinking the shelling was very close. It may be in my friend’s neighbourhood. I rush to the scene to check on him, anticipating a day full of death.

It’s 8:30 in the morning. No friends are hurt. Then, the nearby Mashhad neighbourhood where I was is hit by two airstrikes. Minutes later, fighter jets swoop down again, and the street where I spent the night is hit.

Warplanes continue to shell the area and the city relentlessly for hours. Aleppans strain under the torrent of death raining from above, not knowing whether to ask God for help or to wait for death, or both.

People gather in alleyways. Everyone is occupied with one aspect or another of the jet’s tactics, as if death were a mere side event. Some discuss how much ammunition the plane carries, while others its next target. Some curse the pilot and ask him to bomb them, while others challenge him to come down to the ground if he was a real man. You can hear the mumbling of prayer mixed in with conversations about the Geneva Conference. Some curse the peace conference for not stopping the bombing, while others mock the whole situation.

You don’t know which prayer to invoke. If you escape death it means someone else didn’t. This is the final equation.

You don’t know what to feel. Anger or sadness? Pain or terror?

You walk through the city and look around to see smoke billowing from several places like a cheap Hollywood movie.

You realize after a while that what you see is actually happening: the city is burning.

People stay close to buildings and shops, avoiding open spaces in an attempt to thwart death.

Anxiety is mixed with terror. When the planes pass overhead everyone rushes to the nearest building, gathering their hopes and dreams, reciting what prayers or curses they know, trying to keep their children alive. Children cry hanging on to their mothers. Mothers cry.

Rebels fire intermittent shots at the helicopters with 14.5 and 23 mm machine guns — bullets of resistance and anger, but also of helplessness.

News of death spreads with alarming speed. Any driver or merchant can give you a detailed bulletin of the dead.

You know that those who have more powerful weapons can kill you, exhaust you and end your life. Shops and schools close. Cars disappear from the streets, along with people.

You know that your city will never be what it was an hour ago, and that its face changes every day. Entire neighbourhoods are empty, whole streets destroyed. The regime’s destruction rests silently on every building, planting sadness in every heart. The loss encompasses everyone. Every family has a martyr, a prisoner or a refugee.

After every shelling, hospitals turn into morgues. Bodies line up on sidewalks so people can come and identity them.

Charred bodies and bodies that are no more than small pieces of flesh are put in bags and buried. No one knows how the victims’ families will know they died. It’s a terrifying thought. You are not afraid of death, but you are scared that your loved ones will continue to hope that you are alive and will come back to them.

I cross the street with my friend. Minutes later a plane shells it. I hear the explosion and I do not want to run. It would be silly if I ran and died. I want a dignified death. I want to at least die standing up. I hope for an enemy with a shred of honour who will fight me face to face.

A plane drops another bomb. The world is giving Assad the green light to destroy the city and no one does anything, not even to save face. What a miserable, shameful and ignorant world.

At sunset near the Jisr al-Hajj roundabout that is filled to the brim with garbage, an explosive barrel rolls out of a helicopter. You can follow it with your naked eye as it reflects the sun’s fading light. The barrel sparkles in the sky. You know that with it comes inescapable death and injury. You know it will target your soul and your memory.