Sweida, which was in a generally neutral position a year ago, is now at the heart of the battle for the south of Syria 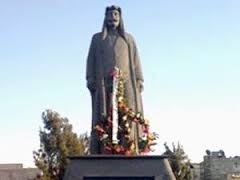 As battles intensify in the south of Syria, the governorate of Sweida is stepping up its efforts to defend its choice of siding with the Syrian state. It will be a costly battle no doubt, but the region historically known as Jabal al-Arab – Mountain of the Arabs – will not accept today what it has stood up against repeatedly in the past century, including in the 1920s and 1950s, which is partition and separation from the Syrian state.

Last week brought much tension and anxiety to the governorate of Sweida in southern Syria. The most recent clashes that erupted on multiple fronts in Jabal al-Arab seemed to be more serious than previous ones, foreshadowing an imminent danger for the people of this southern governorate.

Locals fear that the destruction of the water wells near al-Rashida could be the beginning of an effort to drive out the people of the villages of east Sweida to secure the militants’ supply lines and provide them with a base for an assault on Damascus.The reported heating up of the southern front in Syria is now being felt tangibly on the battlefield, from Sweida to Daraa, and Quneitra. Recently, fighters from the Amoud Houran Brigade of the Free Syrian Army (FSA), along with Ajnad al-Sham, al-Miqdad Battalion, and militants from al-Nusra Front and Ahrar al-Sham began an offensive against the Chemical Battalion in the town of Doueiri northwest of the city of Sweida.

The attack, that included a barrage of rockets, was launched out of the city of Busra al-Harir east of Daraa. On the following day, the militants began an assault on the village of Harran, killing four civilians. Three days ago, the militants attacked a military airbase in Thaala, a town west of Sweida, but without achieving any significant gains.

There were skirmishes in the eastern front of Sweida as well. In the area adjacent to al-Asfar in the Syrian Desert, militants destroyed a number of water wells near the town of al-Rashida, and attacked the town of Tima with machine guns.

The villages of eastern Sweida overlook the main smuggling route for the militants from the Jordanian border to the eastern Ghouta region of Damascus and the city of Damir, and beyond to the Syrian hinterland. This route has been seeing increased activity for more than a month now.

Locals fear that the destruction of the water wells near al-Rashida could be the beginning of an effort to drive out the people of the villages of east Sweida to secure the militants’ supply lines and provide them with a base for an assault on Damascus. The locals argue that the water wells in the area feed the entire eastern region of Sweida with water that the villages cannot survive without, especially in light of the drought conditions this year.

The Syrian army, the Popular Committees, and other forces fighting with them have reacted violently, “reflecting how seriously they take the imminent threat,” according to field military sources who spoke to Al-Akhbar.

The sources said, “The army had been alerted in advance, and did not want a repeat of what happened with the Armament and Transport Battalions several months ago.” The sources continued, “[The army] staged an ambush with the Chemical Battalion, as it knew of the attack in advance. The air force was able to kill a large number of militants.”

Concerning the attack on Harran, local sources said, “The attack was repelled, but the militants killed four civilians in the course of their shelling and sniper attacks against the town.” Meanwhile, military sources said that the army was able to deal with the militants assaulting the airbase in Thaala from a distance, forcing them to retreat, stressing that flights in and out of the base continue to operate normally.

The escalation on the field is taking its toll on Jabal al-Arab. Sweida, which was in a generally neutral position a year ago, is now at the heart of the battle for the south of Syria.

“Israel is also taking advantage and meddling in the south with U.S.-Jordanian cooperation, with a view to rearrange Israel’s northern border with Syria and Lebanon, and carve out an [autonomous] southern crescent that would undermine the Syrian central government.” Religious leaders, political forces, and political and security officials in the governorate speak today about a coordinated campaign in the media pushed by the opponents of the Syrian regime, not only in the Druze-majority villages of Jabal al-Arab, but also in the ranks of the large community of Syrian Druze expatriates abroad. This campaign, prominent sources in the religious establishment say, does not seek to incite the Druze against the Syrian regime as previous efforts did. Instead, it focuses on “promoting an isolationist Druze identity separate from the Syrian identity, by convincing the Druze and other communities that the Syrian state is disintegrating, and that they need to find new ways to preserve their future as a group.”

The sources added, “Israel is also taking advantage and meddling in the south with U.S.-Jordanian cooperation, with a view to rearrange Israel’s northern border with Syria and Lebanon, and carve out an [autonomous] southern crescent that would undermine the Syrian central government.”

According to well-placed security sources, “Israel has tasked agents of Arab Druze from Palestine, Lebanon, and Syria to promote Israel as an alternative patron of the Druze community in the event the Syrian state collapses.” The sources believe that Israel has a strategic interest in pushing for partition in the Syrian south, following its retreat in the aftermath of withdrawing from south Lebanon, well before the Syrian crisis.

However, the sources find the Jordanian role odd, questioning whether Jordan had any interest in such schemes, because, as the sources said, the disintegration of the Syrian south could push communal frictions in Jordan to the forefront in the future.

All this has prompted stakeholders in the region to emphasize the attitudes and choices of the governorate more than any time in the past. “Sweida has no other choice but the strong central state in Syria,” the religious sources said.

Things do not stop here, according to prominent figures in the governorate, but also include efforts to “prepare Jabal al-Arab and various popular segments in Sweida to become involved in defending the villages side by side with the army.” Yet Sweida understands that the price of securing a major geographical and demographic support base for Damascus and the Syrian state will be costly.