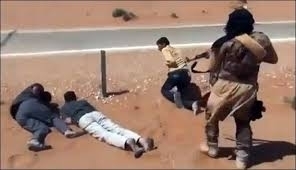 At the center of the city of Raqqa, the roads intersect: on the right there is the garden of Haroun al-Rashid, where fighters from the Al-Qaeda-inspired Islamic State of Iraq and Greater Syria (ISIS) have decapitated the statue of the park’s namesake. On the left there is the Church of the Martyrs, which has been turned into a missionary office for the group. To the north is the commercial center of the city, which is now mostly empty, many of the shops are closed. And to the south of the crossroads lie buildings destroyed in the shelling of the city.

This is the situation in Raqqa today, which fell from regime control just over a year ago, on March 5 last year. It was then captured by ISIS, who took advantage of the withdrawal of the Ahrar al Sham and Jabhat Al Nusra groups at the end of September 2012. At that time the regime had only three headquarters in the province:

1. The command of Division 17, one kilometer to the north of the city

The military airport of Tabqa, about 50 kilometers to the west of the city, on the highway to Raqqa.

A Full Year Has Passed and Raqqa is Still Broken

Uncle Abdul Razzak Shiekh Omar, 58, has been a fireman in Raqqa for 30 years. His friends call him Abu Staif, and he has a white, very wrinkled face, due to his age, and having worked such long hours.

Meeting at his work place, and before he started talking, he insisted on serving tea. But because he had no gas, he lit some firewood, put the teapot on, and began discussing Raqqa today, as the water began simmering.

He talked about the battle for Raqqa, and how formations of the Free Syrian Army entered and began controlling the city street by street.

“On March 2, all employees of government departments left their offices, fearing for their lives, including almost all of the workers in the fire station. At first I thought I should flee as well, but then I came to a decision. I realized that I have a humanitarian duty, and as a fireman, I hadn’t had any relations with the regime, so I decided to stay and do what I have to do,” Abu Staif told All for Syria.

The first major incident which occurred in Raqqa was on February 5, 2013 [ed – his date was as 2.5.2013, I presume this means February? or is the date American? and it’s actually May 2?]. Nusra fighters accused three individuals of being shabbiha members, and executed them in broad daylight, at 3 p.m. Their gallows were suspended in al Sa’aa square, which is where the first anti-regime demonstrations used to start from.

Activists in the city denounced the incident and its location, because of the symbolic status of the square in their minds.

Shuaib, a media activist, spoke to All for Syria about the incident.

“After the split between Nusra and ISIS, they executed these three people by firing at them in front of everyone in the city.”

“The bodies were left suspended there, as no one dared to take them down. A few hours later a nurse, Mohammed Saado, took them down and buried them. The very next day, Mohammad was, unfortunately, killed in unknown circumstances, but all of us knew that it was Nusra.”

The Terrorism of ISIS

Khalaf al Jarbu’a is an opposition Communist politician from Raqqa, but he has left the city because, he said, he is on ISIS’ wanted list.

“The Islamic State of Iraq and Greater Syria has put me on their elimination list,” he told All for Syria, “information I got from a source within the organization itself.”

“Now I’m just a refugee, and I brought my eldest son here too because a few days after I left, they tried to kill him.”

Aware that his life was in danger, Al Jarbu’a remained in hiding in Raqqa until the end of clashes between Ahrar al Sham, which controlled the entrance to Raqqa, and Jabhat al Nusra on one side, and ISIS on the other. After the fighting had subsided, friends helped him escape to Urfa, in Turkey, where he now lives.

He added that his home city was being used as a guinea pig.

“Raqqa is considered a test case for the major players in the Syrian conflict: they see ISIS as one of the key chapters. International powers still think that ISIS will play a fundamental role in the coming months, perhaps particularly in terms of the Sunni-Sunni conflict, which might eventually lead to a Syrian Taif agreement, in the name of Geneva II.”

ISIS’ Crackdown on Christians in the City

But the crackdown by ISIS does not stop at Muslims, with the organization recently imposing a tax on Christians: “Every male Christian in the city, if they are rich, must pay four gold dinars; if they are middle class, half of this, and if they are poor, half of this again.”

The document was called, “The first custody contract in the Levant between the Islamic State and the Christians of Raqqa province.”

Asides from the gold tariff, it also stipulates that Christians are “neither allowed, inside or around the city, to establish a monastery or church, or to reconstruct any damaged ones.”

In addition to that, “They are prohibited from displaying their religious cross, or any of their books, in Muslim roads or markets, or to use loudspeakers while performing prayers or any of their worship rituals.”

“ISIS is playing a game with this tribute, and it will not affect coexistence in the city at all,” activist Suad Nawfal told All for Syria.

“It is essentially alien to the fabric of Syrian society. And anyway, the number of our Christian brothers in Raqqa was already very low, and most of them have left now, since ISIS occupied the churches in late September 2013,” he added.

In Raqqa there are four churches: the Armenian Martyrs Church and the Church of Our Lady of the Annunciation in downtown Raqqa; the Martyrs Saints Sergius and Bacchus Church in Tabqa, and a church in the city of Tal Abyad.

Last year, in late September, ISIS members removed the cross at the Church of Our Lady of the Annunciation, but activists in the city protested against this, and carried the cross back to the church. Nawfal led the demonstration, which led to threats against her life, so she was forced to leave the city. She now also lives in Turkey.

“I am wanted by both ISIS and the regime. Both are calling for my blood, because I rejected ISIS’ occupation of churches, and their theft of the province’s properties, along with other battalions.”

She described ISIS’ firm grip on her city as an “occupation.”

“For over a year ISIS has provided nothing but further detentions, abductions, harassment and mysterious executions. Since the city fell under its control, Raqqa has only witnessed greater limitations on freedoms and more oppression on its people, especially women, through the false decrees that they issue.”