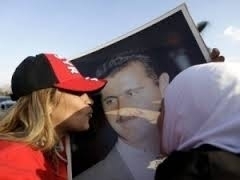 “Mr. President, Dr. Bashar Hafez Al-Asad, today I discovered that we, as Alawites, are just worthless numbers in your state! I was really happy for the freed nuns and I thank those armed groups for not executing 1,000 Alawites in order to release the nuns!! I do not have a single doubt that you thought about it anymore.

“Tell us the truth! Have you issued papers declaring your ownership of us as Alawites? We are the ones who have paid the price, now and before, Mr. President. Excuse me, Mr. President, but your policies have become a real fatal danger for Alawites! We are humans, Mr. President! We have feelings and sometimes we cry too! Believe me we are like everybody. Throughout Alawites' history, since the third century (AH) until this date, Alawites have not been a subject of such brutal genocide, and by whom? A state ruled by an Alawite president!!”

This section ending with two exclamation or question marks, is written by a pro-regime (individual), on a pro-regime Facebook page nonetheless. Reactions from people related to this event along with the audience's reaction—whether it was a pro- or anti-regime one, on the release of the kidnapped nuns and their exchange in return for about 150 female and childe prisoners—were more important than the exchange operation itself. Reactions began after the release of the video in which the nuns were released. That video is not a chapter of a feature film. Once upon a time, in a country called Syria, a member of "Al-Nusra front" carried a helpless old nun, and put her in one of the cars that were heading to the "exchange" place. That video we watched was not a movie.

It happens in Syria that the regime exchanged the nuns arrested by its enemy, with women arrested by it. This was like what happened a few months ago, in a Lebanese and Iranian prisoner exchange deal. Concerning both those two deals, this pro-regime (individual) expressed his feelings of loneliness and injustice. The regime, which claims to “protect the minorities,” is unable to protect its own people. “Believe me, we are like all people.” Isn't this saying a reminder of the famous saying from one of the protesters in the beginning of the revolution: “I'm a human, not an animal, and all the people are like me”?

When an unusual day ends like other unusual days, after the darkness overshadows the heavens and the coast's son sits with himself, he might be, perhaps, possibly, provoked when hearing the words coming out of the anchor's mouth about this "historic" bargain! We may use an exclamation mark here, but this tiny mark may be unable to express how deep our exclamation, shock, and pain is. On one hand, numbers can lose their importance, and the number 13 can appear equal to the number 150. But on the other hand, Assad's regime enjoys humiliating the Syrian creature by exchanging him with an Iranian or Lebanese one. Then, the well-dressed anchor will welcome the nuns on the Syrian-Lebanese borders, and describe this bargain as historic, and in her turn, she also enjoys humiliating Syrians. Not just any Syrians—they are the pro-regime ones, who have sacrificed their children for a certain group of people, as if their own existence was attached to those people's existence, and by protecting those people they protect themselves.

If the anchor knew what Pelagia Saiaf would say, after arriving with the nuns to the Almasnaa border area, she would probably cover this "historic" event with less than normal coverage. Furthermore, if the regime knew the quality of statements that would follow the exchange process, it would completely change its mind about covering this event in the media. Professional TV presenters on the pro-regime Syrian and Lebanese official channels did more than their duty. They tried to dictate to the nun what she must say, but the nun thanked “the terrorist armed groups,” “President Bashar Al-Assad,” and “the prince of Qatar, Tamim Bin Hamad" in one sentence, ruining their news reports . By thanking all those sides, [and] all their efforts, [they] became equal! She did not say that she escaped from the hands of Takfiri, rapists of women, terrorists. She thanked the “terrorist groups” for their generosity, and denied what the anchor said about them having removed crosses by force. She simply said that they were not forced to do anything and that they lived in a building equipped with all that they needed. She also said that the kidnapping group treated her and her colleagues very well, and according to the (kidnapping) protocols. After that, reactions were divided into an oppressed and oppressive side—A side that condemns the “minority protector” regime for not exchanging the prisoners it had with Alawites prisoners, or at least with the pro-regime sect. On the other hand, there was another side, led, in its astonishment, to denounce the nuns in a cheap and improper way by challenging their honesty.

The official or Arab pro-regime media is unable to hide the evident truth. The Syrian Information Minister's statements saying that the deal was done without any Qatari intervention and that the real number of the released prisoners was 25 not 150, is now considered a sort of fiction. There is a pro-regime proportion—of what size we do not know—that is unable to live in the shadow of a regime that belongs to the same sect but sells its sect when the political game urges it to do so, like what it did to the rest of the Syrian people from all sects. Even if the regime did not target those people with explosive barrels or chemical weapons, using them as cheap human shields and not making any effort to save and protect them is brutal enough.

"Admin Nawwar, I want to say a few words on your honorable page… But I hope that you do not delete what I am going to say because I have a profound pain in my heart. I am an Alawite from Safita and I am against the regime… You will ask me why, and I will repeat that we are human shields for one family… In what history book in the world, has a sect died to defend one family? You will tell me that they kidnapped and slaughtered our people, and I will tell you that these leaked videos about torturing prisoners will make you come out of your grave and become radical. We are stupid when we think that he is our protector and when we say that we love you! Why should I love you?!”