Journalist Firas Choufi drives through the province of Daraa, where the revolution broke out 3 years ago 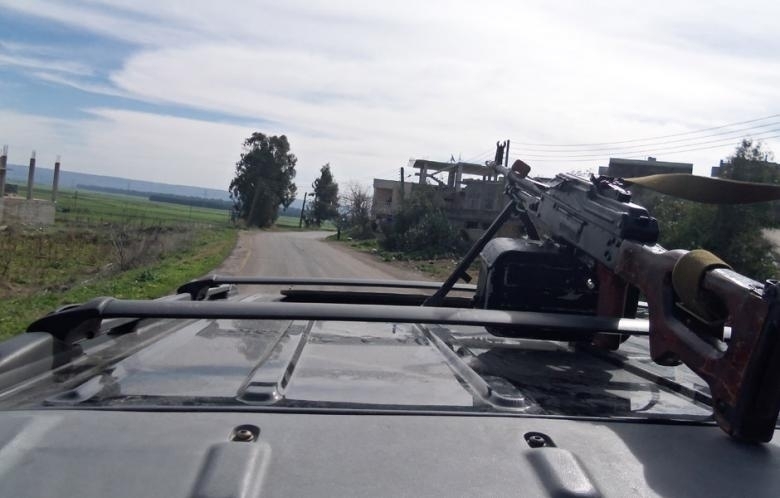 For over an hour and a half, our car cut its way through the Hauran plateau at great speed. On the road from Damascus to the city of Daraa, in the south of Syria, death awaits at every corner.

The driver constantly kept his eyes peeled throughout the trip, carefully monitoring all sides of the road ahead. Death here can be quite “creative.” It could come in the form of an improvised explosive device (IED), a sniper’s round, a mortar shell, or even a knife slicing through your neck after being ambushed and captured.

The driver constantly kept his eyes peeled throughout the trip, carefully monitoring all sides of the road ahead. Death here can be quite “creative.”In retrospect, leaving Damascus in the early hours of the morning was a good call. It helped us start our journey before traffic overwhelms the city and return in the afternoon before it gets dark. Travelling along this road by night is strictly prohibited.

The Syrian army checkpoint on the edges of the Nahr Aisha neighborhood of Damascus was the official signal that the trip along the Damascus-Daraa highway had begun. From there on forward, a lot of cigarettes would be lit and for some time, ours was the only car travelling along this desolate road.

After the city of Kiswa, the last inhabited area of the Damascus Countryside governorate on the regime-controlled side, the road takes you to the mesmerizing Hauran plateau. Green and brown patches littered with crops and rows of short wheat extend as far as the eye can see. Only the huge power plant of Deir Ali shatters the serenity of the pristine landscape.

The highway acts as a demarcation line for the Daraa battlefront. The main road is under the control of the Syrian army, and is interspersed with checkpoints every few kilometers. The Syrian army controls one side of the road while the armed opposition controls the other.

Although most of the Daraa governorate is under the control of various armed groups, the army controls around 60 percent of the city of Daraa. Out of 135 cities, villages, and towns in the governorate, the army controls 30 directly and 10 indirectly, meaning that the army can stop militants from seizing them.

The rest is under the control of al-Nusra Front and factions affiliated to the Islamic Front, and what is left of the Free Syrian Army (FSA) as well as a new group called the Army of Mohammad, which has started to operate in the western areas of the governorate and the eastern countryside of the adjacent Quneitra governorate. Security sources here told us that more than two-thirds of the militants are radical Islamists, with a significant number of non-Syrians in their ranks – 80 percent are from Jordan and Palestine, and the rest are from Saudi Arabia, the UAE, Kuwait and other countries. The remaining third are non-radicals, mostly locals from Daraa.

Two unarmed soldiers run on the dirt road that is protected by a berm. From a site near the “emir checkpoint” and the metalworks factory in southeast of the city of Daraa, it was possible to hear sniper rounds being fired at the two soldiers from militants positioned in the fields surrounding the grain silos nearby. We could feel the bullets falling around us, but the way the soldiers were walking reminded us that they had probably memorized the road by heart, and the snipers’ bullets too.

From a distance, the Gharaz Prison appears like a fortress in the middle of the plain, on the southeastern approaches of the city. Currently, the prison is under the control of al-Nusra Front, the Syrian army battalion charged with protecting it withdrew 10 days ago after a four-month siege.

A sixty-meter-high grain silo soars into the sky nearly a kilometer away from the prison. Incidentally, these are the most advanced silos of their kind not only in Syria, but in all of the Middle East.

Through military-grade binoculars, we could clearly see a Russian-made infantry fighting vehicle that had been destroyed by an anti-tank missile fired by the militants shortly before the prison fell. The army tried to repel the attack using overwhelming firepower from advanced weaponry.

From our position, we could feel the ground shaking beneath our feet from the sheer magnitude of the firepower used by the Syrian army, from rocket launchers to tank-mounted cannons shelling the locations of the armed opposition forces as they assaulted the silos. Two days later, the opposition was able to seize them, executing seven soldiers and capturing several others. One soldier was beheaded on camera, and the footage was posted on YouTube.

Staying in the same place for too long could subject one to danger. As soon as someone suggested this to us, a mortar shell fell nearby. We were not the only ones using binoculars after all!

One of the people involved in this area said that what happened in the prison and the silos resembles to a large extent the opposition’s assault on the Otaiba front in Eastern Ghouta, during which the opposition was able to achieve significant advances against the army. However, this was soon reversed completely, and the opposition’s offensive turned into a fatal blow against its forces in the Ghouta area.

The southern front and the plans to launch an offensive from southern Syria, more than one military and security source familiar with the issue has stressed that the opposition no longer has the ability to change the balance of power from Daraa.The source explained the deployment patterns of the Syrian forces before the war, including those of the Third, Fifth, and Ninth Divisions, into small armored, anti-tank, and anti-aircraft formations primed for a war with a regular army such as the Israeli army. This, he said, allowed the militants to rapidly control a considerable number of army positions. However, the army has been building large barracks, and has abandoned small outposts.

The source continued, “The militants sabotaged the majority of air defense installations, without taking advantage of the missiles present inside. This is proof that the countries backing them wanted them to disable these installations, but without letting the militants use them against Syrian warplanes to facilitate the job for Israel or NATO to carry out airstrikes from Jordan.”

The southern front and the plans to launch an offensive from southern Syria, more than one military and security source familiar with the issue has stressed that the opposition no longer has the ability to change the balance of power from Daraa.

Sources say, “There are limited movements along the southern front, as evidenced by the attack on the prison; but the rest is psychological warfare.” As far as the Syrian army is concerned, the next step after Qalamoun will be the southern governorate, where, according to the same sources, the Syrian forces will benefit from a multitude of favorable factors.

First, the army is putting to use the lessons it acquired from the battles in Qusayr, Homs, Qalamoun, and the Damascus countryside, and the new tactics it learned combining guerilla and urban warfare, classical warfare, coordination between land and air units, in addition to the use of reconnaissance planes.

Second, the mood of the people living under the militants’ rule has changed to a certain degree. Some local residents now collaborate actively with the army, and supply it with information about the locations and movements of the militants.

And third, the army will be taking advantage of the infighting among armed opposition groups throughout the governorate.

According to a military source, over the coming few weeks, the army will begin implementing a plan to regain control of various areas here, tighten its siege on armed groups, and attempt to isolate their formations from one another.

On the way back to Damascus, we race the setting sun. How we wished we had visited Hauran before the war.