She's 9 years-old and despite the best efforts of Handicap International's physiotherapists, Isra is unlikely to walk unaided again 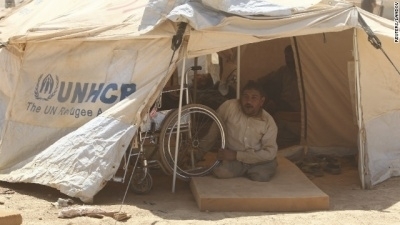 Two aid organizations are calling on the international community to do more for the disabled and elderly among Syria’s displaced population, using a new report released Wednesday to highlight the special needs that these already marginalized members of the refugee community continue to lack.

The report from Handicap International and HelpAge International claims that older, disabled, and injured Syrian refugees are being doubly victimized as the three-year long civil war continues to keep them from their homes. Specifically, the report says, “studies of humanitarian programming show that these same groups are often neglected in the assessment, data collection, design and delivery of responses.” To help other humanitarian organizations in developing their aid packages, the two groups surveyed a sample size of 3,200 refugees in Jordan and Lebanon to determine how many of them weren’t receiving humanitarian assistance that matched their needs.

She's 9 years-old and despite the best efforts of Handicap International's physiotherapists, Isra is unlikely to walk unaided again.

While all of the 2.6 million Syrians who are currently living in neighboring countries face similar concerns — including a lack of food, healthcare, and shelter — the survey found that 30 percent of refugees have specific needs that aren’t necessarily being considered. These needs can be the result of one of three types of impairments — physical, sensory, and intellectual. “One in five refugees is affected by physical, sensory or intellectual impairment; one in seven is affected by chronic disease; and one in 20 suffers from injury, with early 80 per cent of these injuries resulting directly from the conflict,” the report’s executive summary said.

The report illustrates the point through examining the lives of several individuals and families, not just those living in the refugee camps but also those dispersed among their host country’s population. In one such anecdote, the report looks at the family of a woman named Sahar living in Amman, Jordan. Both of her daughters have severe cerebral palsy, and have “extreme difficulties in moving, speaking and communicating.” Due to the inability of her husband to find regular work, and the lack of specific aid tailored to her daughters’ condition, Sahar and her family are struggling to meet their basic food and healthcare needs, let alone those that come with caring for a family member with a disability.

“Displacement has a severe negative impact on the daily life of disabled and injured people, who need urgent access to health services but also long-term medical, financial and social support,” said Thierry-Mehdi Benlahsen, Regional Emergency Coordinator from Handicap International, in a statement accompanying the report’s release. “Addressing the needs of all refugees is critical to the delivery of principled and impartial aid. As such, the findings of the report have far reaching consequences for the way humanitarian response activities are designed and delivered.”

“The lack of psychosocial or mental health care is a major challenge, significantly affecting the well-being of older people but also placing an additional burden on their families” Toby Porter, Chief Executive Officer of HelpAge International, said in a statement. “Aid needs to be tailored specifically so that older, disabled and injured Syrian refugees are provided with appropriate treatment, so that this in turn may help to reduce the trauma of displacement.” The United States has to date proven the largest single contributor of humanitarian aid to Syria, and has specifically earmarked funding for “referral through women’s health centers, mobile clinics, and outreach teams providing health and psychosocial services in Syria, including home-based support to vulnerable women and children,” though the need for more such aid is apparent.

Delivering aid at all has proven a challenge for the United Nations and other organizations devoted to lessening the crisis. Most pressing, a looming drought is causing concern that even more refugees will face chronic hunger. And a concurrent lack of funding forced the World Food Programme (WFP) to cut the size of food parcels it manages to deliver inside Syria by 20 percent in March to allow more people to be fed. $1.6 billion is required to fully fund WFP’s efforts alone throughout the year; so far, only 22 percent of that funding has been received.