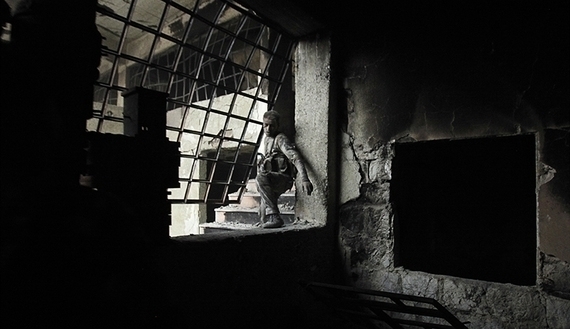 The recent all-out rebel assault on regime-held west Aleppo was a huge shock, both to the regime fighters entrusted with holding the enclave as well as the hapless residents of that part of the city. The Islamist groups had been mustering their forces for quite some time. The coordinated offensive on several fronts was spearheaded by prominent jihadist groups, most notably the al-Qaeda affiliate Jabhat al-Nusra, and reportedly led by Chechens. It has featured a host of foreign fighters.

The Aleppo offensive began immediately after Islamist groups assaulted Kassab, in Latakia province, in late March, and it increased in ferocity in stages, culminating in a concerted effort by rebels to enter the Zahra suburb and lay siege to Air Force Intelligence headquarters in the northwest. The rebels also attacked the military academy on the Damascus highway to the northeast and attempted to sever the only road in and out of Aleppo via Khanaser in the Ramouseh area. In the past few days, rebels have also attempted to push through from the east of the city at Midan as well as in the old city. The assault would not have been possible without the withdrawal of the Islamic State of Iraq and al-Sham (ISIS) from most of Aleppo province. This resulted in the cessation of the interfactional war among Islamist rebels in the area, allowing them to concentrate instead on fighting the regime.

West Aleppo had not experienced anything like the current assault since the conflict began. The past week brought the most terrifying experiences local residents have had to confront. Ceaseless bombardment and shelling lit up the night sky, and explosions shook buildings miles away. Air raid sorties by fighter jets lasted all day. Adding to the terror and confusion was a partial power and communications outage, which plunged the already panicked city into what could only be described as a state of hysteria and pandemonium. Frightened and dazed people attempted to flee to supposedly safer areas. The once-affluent and crowded suburb of Zahra now lies almost completely deserted, its streets empty, save for the sounds of gunfire, as the looters move in. Prices skyrocketed as those who remain stocked up on basics and petrol stations closed. Desperate people wanting to leave were trapped in the city because the only road out had been closed.

The intense fighting has seen the Islamists make gains on the Zahra front, entering several residential blocks after heavily bombarding the area. They took up positions inside homes, and at least 25 families were taken to the nearby town of Hreitan. Some have been released, but the fate of others remains unknown.

I recently spent an evening with a group of regime fighters taking a night off from the Zahra front line in a "commandeered" apartment. Such a dwelling in Aleppo might be an empty home whose residents have fled the city (or are wanted fugitives) or an abandoned building at the front lines. Indeed, many buildings in the affluent Zahra suburb have been abandoned since the rebel assault began. Either way, troops from both sides of the conflict make ample use of them.

The regime soldiers and officers had settled in for a relaxing night of drinking, swearing and joking, far from the war outside, stocked with ample food and alcohol to last until dawn. Abu Sa’ad, a volunteer fighter I know well, showed me videos of recent combat on his mobile phone. He said the fighting was so intense that only a couple of dozen meters separated them from the rebels at times. He showed me footage of a commandeered apartment with a large hole in the wall from which a heavy caliber machine gun was firing away.

At that point, his friend spoke up, claiming, “We drove those scum away. They are two kilometers [1.2 miles] away now.” Abu Sa’ad then quietly whispered, “He’s a liar. They’re still there. We got reinforcements — Hezbollah fighters with one very senior officer, about 250 of them. They are very tough and fierce. Without them, I don’t think we could have held on,” he explained. “Of course there are drawbacks,” Abu Sa’ad mused, referring to the Hezbollah fighters. “We dare not drink or curse in front of them. They are very devout and austere men. They carry a Quran with them at all times and pray. I really think they loathe us sometimes.”

As the night wore on and Abu Sa’ad became more inebriated, he confided to me his frustration with rag-tag militias that had fled at the first sign of trouble. “They are criminals and cowards. They are only there to rob people’s houses. They can’t fight at all.” One of these militias is the Popular Committees, which not surprisingly had acquired a nasty reputation throughout the city, especially considering many of its members are ex-cons. Predictably, they abandoned their positions in Zahra when the fighting began, leaving the other overstretched formations, the army, the Ba’ath Brigades, a Hezbollah detachment, Air Force Intelligence personnel and the Al-Quds Brigades to stand alone against an overwhelming number of attackers.

The fighting in Aleppo continues on all fronts, as this do-or-die battle — which will likely decide the fate of this city and determine who ends up controlling it — churns on. Yet again, innocent civilians are paying the highest price for this madness, with indiscriminate shells and mortars claiming dozens of lives and snipers targeting and killing at random. The soul of this city is literally being wrenched in two, its people dying in droves as both sides commit what can only be described as heinous, unforgivable war crimes against the innocent. Desperate, melancholy pleas on social media paint a clear picture of what people here are feeling: “God have mercy on us. … Forgive us if anything happens to us.”