Surrounded by war or forced into exile, Syrians are turning to forgers to secure essential identification documents 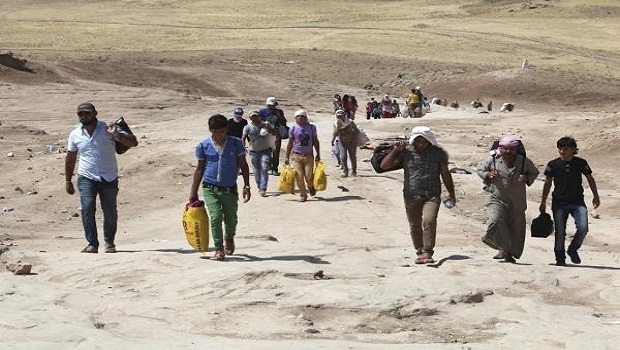 At 5 pm on a humid Friday afternoon, the Bab Al-Salam border gate is heaving. Dozens of civilians, most of them women and children, queue up to cross over the border into Turkey, desperate to make it before the crossing closes for the day. They crowd up to the window of the border office, jostling and shouting, with their most important possessions clutched in their hands—their passports.

For Syria’s displaced people, a passport means the difference between officially existing and not. Those who have a passport can pass through the rebel-held border crossings into Turkey, get residency status once they are there—and, if they are lucky and skilled, find work or scholarships. They can rent apartments, buy and drive Syrian-registered cars, and travel freely within Turkey. Those who don’t have passports must cross the border illegally in the hands of people smugglers and either stay in one of the refugee camps that has been set up by the Turkish government or risk being deported back into Syria.

Faced with that choice, thousands of Syrian refugees are turning to illegal passport traders to buy the documents they need to live a semblance of a normal life in Turkey. A Syrian passport was never a big seller on the black market before the uprising against President Bashar Al-Assad—there were few places that you could travel on one without a visa outside the Middle East.

But Youssef, a sturdy and smiling man in his early thirties, claims he is now selling up to 30 passports a month to desperate Syrians, at 1,500 dollars a time. Some of his customers, he says, sell all their family gold just to raise the funds to buy the documents that will allow them to leave their country safely.

Youssef belongs to a class of criminal entrepreneurs who have seen their businesses boom thanks to the Syrian conflict. Before the uprising he was a small-time forger from Azaz, dealing mainly in fake marriage and degree certificates. He had never learned how to read or write, but he had an eye for copying the patterns and texts on official documents, and the rewards were decent enough to make him risk the Syrian government’s three-year sentence for forgery.

When the conflict started, a stream of young men started coming to him asking to buy the papers they needed to defer their military service. The two-year stint in the military that is obligatory for almost all young men in Syria had always been considered an inconvenience. Men who went to study at university could defer it until they graduated, but then they were forced to spend two years in an army camp, forgetting everything they had learned, before they could properly start their lives. When the army started firing on protesters in Dera’a in 2011, what had been an inconvenience became an issue of moral conscience. Many young Syrian men dreaded being called up to serve in an army that was killing people they sympathized with. So, to get out of it for another few months, they came to men like Youssef.

Then, as protests morphed into full-blown conflict, Youssef’s customers changed once again. Civilians began to flee the barrage of shelling, bombing and tank fire in the cities, fleeing first to the safe places inside Syria. Soon there were no safe places left. Every region, every city and every town was engulfed in the spreading calamity. When the Syrian rebels took control of a number of border crossings with Turkey in 2012, they provided a way out for the people who had documents. Those who didn’t—or who had been forced to leave them behind in the houses they fled from—also started coming to men like Youssef.

Now, as the conflict drags on, even people who originally left Syria with valid documents are being forced to pay illegal traders to renew them. Young men who have not completed their military service are given just two years’ validity on their passports, so many of those living in exile in Turkey are now counting down the weeks until their documents expire, knowing that the regime in Damascus is unlikely to renew them officially if they have had any involvement with the opposition.

“At first I was just altering passports that had expired,” Youssef explains. “I would scratch the date off and replace it.”

Then he found a more reliable method. He started buying blank passports and renewal stamps from a corrupt regime official. They are indistinguishable from the ones issued by the regime: Youssef boasts that one of his customers even managed to travel to Iran—a staunch ally of Damascus—on one of his passports. “This business depends on trust, and people send their friends and relatives to me,” he says. “Reputation is everything, and mine is good.”

The longer the conflict rages on, the more ordinary people will be forced to do business with men like Youssef. He insists that he is not a profiteer: “I am just trying to help people,” he says. The Turkish government is taking active steps to both help the Syrians on this side of the border, and to stem the wave of criminality—smuggling, forgery and trafficking—that has swept along its border as a consequence of the conflict in Syria. It is in the process of issuing ID cards to all Syrians in Turkey—whether they have passports or not—which would allow them to remain in the country without obstruction and cross the border freely.

But it is estimated that there are over a million Syrian refugees in this country, and many of them are hidden away in poor-quality apartment blocks, working illegal and underpaid jobs. It will take time to register them all—and until then, Youssef’s business will continue to flourish.