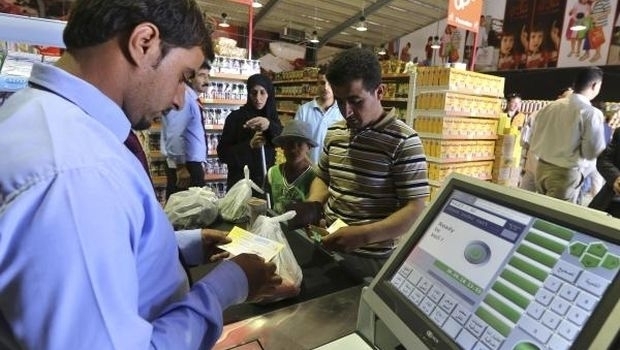 “I’m comfortable now; no one bothers us here and I don’t hear the guns and missiles anymore,” said 11-year-old Abdul-Karim. He spoke to Asharq Al-Awsat on his first day at the new Jordanian Azraq camp for Syrian refugees to which he fled with his family. Abdul-Karim explained that he was waiting for the beginning of the new academic year to enroll at a school, as he had not studied for two years. “I can’t wait to study again, especially because I was one of the top students in my school before we had to flee,” he said.

Early last week the Jordanian authorities officially opened the sixth camp designated for refugees from Syria, refugees who continue to flee the violence there despite the huge numbers who have already left.

The camp is based roughly 12 miles (20 kilometers) west of the town of Azraq, east of the Jordanian capital Amman. In what is still its initial stage of operation, it is equipped with 5,000 movable shelters to accommodate approximately 25,000 refugees.

Brig. Gen. Waddah Al-Hamoud, the director of Syrian refugee affairs in Jordan, said: “This camp is the second-largest of its kind in Jordan [after Za’atari], and we hope that it will be the last.” He added that the other four camps were smaller in terms of space and numbers, and that a total of 21 UN-affiliated organizations had worked with the Jordanian authorities to help set up the new camp, whose construction began last year.

According to sources within the UN High Commissioner for Refugees (UNHCR), the new camp, which is currently home to approximately 600 people, will receive all new refugees coming to Jordan. Each one will receive a monthly coupon worth 24 Jordanian dinars (34 US dollars) to buy basic supplies from a supermarket inside the camp.

Many of the refugees in the new camp tell a similar story—that of a desperate search for a place of safety after their homes were destroyed or became a warzone, moving from place to place as the violence spread across their country.

Hani, a 22-year-old refugee who came to the Azraq camp from Aleppo with his family of 14, told Asharq Al-Awsat he had been living as a refugee inside Syria for the past two years. He said: “First we escaped our village Al-Masfara, which is close to Aleppo, after our house was destroyed, and we headed for Raqqa, in eastern Syria. We traveled between towns and villages, fleeing for our lives from one place to another until we had almost run out of money. We escaped death many times because of the bombs and missiles launched by the regime’s forces.”

He added; “We left Raqqa for the Jordanian border and the journey took five days, during which we endured hunger, thirst and were overwhelmed with fear because of the shelling. Then the Free [Syrian] Army helped us get to the Jordanian border, as they dropped us just a few [miles] away from the border where the guards greeted us and gave us a quick meal, water and a blanket. Then we were moved to the reception center for refugees and we were registered and issued with a card from the UNHCR in order to receive aid.” Although the camp was still in its early stages and was in need of some improvements that could be met in the future, he said: “We’ve heard that Al-Azraq is much better than Za’atari.”

Ali Salim, a 34-year-old refugee who came from the Syrian city of Hama with his wife and three children, told Asharq Al Awsat: “We arrived in Jordan four days ago. Our journey took a week. We traveled in cars, escaping the shelling. There is no safe place in any Syrian city or town . . . government aircraft are carrying out indiscriminate bombing of civilians and non-civilians.”

Salim, who was initially reluctant to speak as he left one of the shops selling basic materials and food supplies to the refugees, said the camp had an excellent infrastructure despite its large size, which meant that access to water and the supermarket required a great deal of effort.

He said: “We have to travel a long distance every day for our basic needs. In addition, there is no electricity, which needs to be extended [from other areas]. Also, there are no shops that sell calling cards so that we can contact the family we left behind in Syria.” Salim expressed hope that these “basic” items would be made available, “because if not then we will be cut off from the world.”

Wael, who refused to give his full name, spoke to Asharq Al-Awsat only two days after arriving at the new camp, having fled from rural Dera’a with his wife, three children and 24 other relatives. He said: “At first, everything is difficult, especially when you are away from your home. But with time, we can overcome everything, and most importantly we feel safe and secure.” He added: “There are many services that we require, but those in charge of the camp promised they would deliver those services, especially electricity, because we live in complete darkness every evening.”

Amal, also known as “Umm Shahad” to her friends, is from the city of Idlib. She told Asharq Al-Awsat her journey to the Jordanian border took three days. “We suffered a lot, especially our children, because of the changes in weather; it was very hot in the daytime and cold at night,” she said. “My husband and I, and our children [six boys and five girls], along with dozens of other Syrians, headed to Jordan because there’s nothing left for us in Syria except fear and suffering and the anticipation of death at every moment.”

Observers believe that the opening of the Azraq refugee camp is an indication that the Syrian crisis, now entering its fourth year, is likely to continue and that the burden for Jordan and other neighboring countries will intensify as the number of the Syrian refugees increases. The new camp is further evidence of the international community’s failure to resolve the crisis from a humanitarian point of view, whether through the creation of safe zones on Syrian territory or providing aid for the Syrians in their own areas, as stipulated by the UN Security Council resolution.

The new Azraq refugee camp is more organized than the Za’atari camp and more secure and difficult to enter without authorization, unlike the Za’atari camp which was infiltrated by thousands of refugees, and has become, over the course of time, a stopover from which Syrian refugees enter Jordanian cities.

Jordan currently hosts approximately 600,000 Syrian refugees who are registered with the UNHCR, but officials say there are actually millions of Syrians in Jordan, with only a minority living in the camps.