Why have some Syrian female opposition activists taken off the hijab? 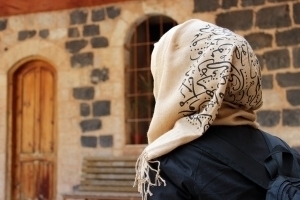 Removing the hijab has become a limited, but rapidly spreading phenomenon recently among Syrian female activists. Some support the act, saying that this is "a revolution in customs and traditions",while others charge those who do so with atheism and a betrayal of the Islamic faith.

The role of extremist groups


Mariam  – a pseudonym – is an activist from the city of Damascus. She says she had worn the hijab since the age of fifteen, and while she was not "convinced" by it, she liked wearing it. She says she went through a phase of religious commitment and attended religious classes in Damascus, then traveled to Europe for her post-graduate studies. She insisted on wearing the hijab there, despite the difficulties in study and work, due to the prohibition of hijab practiced by the French government.

"I defied this decision because it was preventing me from exercising my freedom in a country that claims democracy," she says.

But her conviction began to fade during the Syrian revolution, especially after "the violations of some of the groups that speak on behalf of the Islamic religion in the liberated areas," she says. She removed her hijab because she says, she "did not want to be considered on the side of these groups".

"It is not reasonable to say that showing my hair is a sin while what is happening in my country at the hands of Islamic groups is not. Our treatment is our identity, not our hijab," she explains.

Mariam says the revolution gave her "a strong motivation to make the decision", something she did not have for 15 years, despite facing much criticism from her father and her friends. Meanwhile, some of her friends saw he decision as courage and the "beginning of breaking the restrictions imposed by society on women."

Dima, another female activist from a conservative family in Damascus, recently removed her hijab after 11 years. The atmosphere of her family had become religious after the death of her father, and they had forced her to wear the hijab.

Dima grew up under the lessons of the preacher Amr Khaled, completing her studies in Omar ibn al-Khattab Shariah schools in Damascus. But at the same time, she did not change much of her dress. She continued to follow fashions, while also continuing to wear hijab when she started working with the United Nations High Commission, in an environment in which she was dealing with male colleagues. She began dealing with humanitarian cases during the war in Iraq and the sectarian conflicts at that time prompted her to begin to reconsider the basic principles that had not convinced her in religion. The conflictover whether to wear the hijab had begun inside her.

Once the Syrian revolution started, Dima's thoughts about removing the hijab became what she described as "serious". She felt she would become "someone else" without it.

"The revolution gave me space to implement the decision and the war accelerated the process. I respect those who are convinced by wearing the hijab, but I feel very comfortable without it," she says.

By contrast, human rights activist, Ghada who wears a hijab that covers most of her face, rejects the idea of taking it off.

"I attended several training courses in the field of international prosecution and human rights, and despite wearing the hijab, I did not notice any resentment or surprise at my appearace, despite the fact that the lecturers were mostly European. Quite the contrary, the lecturers were shaking hands with everyone, and when one of them approached me, he just smiled at me and greeted me nodding his head," she explains.

Ghada believes that treating her this way "shows that the West respects the identity of the woman wearing a hijab, while the civilized and cultured eastern man looks at the hijab with contempt."