An airstrike on May 2, 2014 destroyed an entire ancient house and the wall of a church at Shinshrah archaeological site. 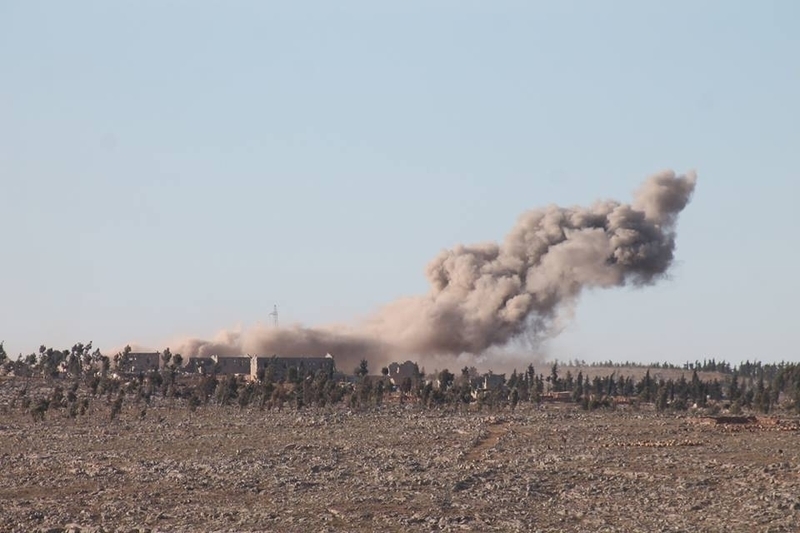 Abu Ahmad, 40, fled the fighting between government and rebel forces in his village of Hish in southern Idilb province over a year ago. He found refuge at an archaeological site called Shinshrah, which is believed to be a village from the Roman era.

“My house was completely destroyed,” said Abu Ahmad. “I do not want to go to the humiliating refugee camps and I cannot afford high rents.”

Shinshrah is located in the Zawiya mountain range, one of about 40 Roman and Byzantine villages built in northern Syria between the first and seventh centuries AD.

UNESCO has classified these villages as world heritage sites and listed them among the places that are endangered by the Syrian civil war.

The ancient village of Shinshrah, which includes the remains of five churches, a number of palaces and around 100 houses, currently hosts over 100 displaced families from the southern part of Idlib province.

The new residents have been breaking the massive building blocks from ancient buildings into smaller stones that they sell or use to build huts roofed with tarpaulin. They have also destroyed the entrance of one of the churches, fearing that it might collapse and destroy their makeshift homes.

But the internally displaced persons (IDPs) are not the only ones to blame for the damage to the site.

On May 2, an airstrike by government forces killed a man and his two children and destroyed the whole of one ancient house as well as the wall of a church in Shinshrah. It is believed the planes were targeting a new IDP settlement located 500 metres from Shinshrah, mistaking it for a rebel camp.

Local officials say they are helpless in the face of the ongoing destruction of this archaeological site.

“We are trying to coordinate with international organisations, specifically UNESCO, in order to form a commission to protect these ruins,” said Mohammad al-Alan, the head of the pro-opposition council of Bara village, where Shinshrah is located.

“We do not have any forces to protect these sites from destruction. We need donations to form security structures solely for the protection of archaeological sites,” he said.

Al-Alan said his council had been explaining to IDPs that the remains would be of importance after the end of the war.

A government committee to protect antiquities has not been able to do anything about the problem, either. Since Shinshrah is located in a rebel-controlled area, the committee only has one staff member there, Hussein al-Aboud.

“The archaeological site that is affected the most by destruction is Shinshrah due to the high numbers of IDPs residing there,” Aboud said. “I’m unable to prevent the destruction. As an individual, all I can do is try to raise people’s awareness, but that isn’t enough.”

Aboud pointed out that historical sites belonged to the public, not the government, and that it was in everyone’s interests to preserve them.

The Culture and Media Bureau in Kfar Nabel has launched an awareness campaign about the importance of archaeological sites and the need to protect them.

According to bureau member Hammoud al-Juneid, 35, the organisation will provide free drinking water to IDPs in Shinshrah for three months. According to Hammoud, one of the reasons why IDPs sell ancient stones from the site is to afford potable water.

Abu Rashad, 40, from the village of Kafrouma, blames the government for his move to Shinshirah.

“My village is located near a military checkpoint in the Maarat al-Numan area. We were subjected to daily shelling and sniper shooting and a large part of my house was destroyed,” he said. “There is no security in our village, so we have nowhere else left but this ancient site. I am very unhappy. There are many poisonous insects, but where else can we go?”

Abu Ayman, 30, from the village of Hish, says it is the fault of both the rebels and the Syrian army that he has to squat in the ancient village.

“Most of the battles between the opposition and the regime in Wadi Aldaif and Hamidiya led nowhere. The opposition and regime forces only succeeded in demolishing most of the villages surrounding these military bases, including mine,” he said.

Many residents of Bara and Kfar Nabel sympathise with the IDPs.

“Who are they harming by living there? If anyone wants to accuse them of destruction, let that person liberate their villages or find an alternative for them,” said Fadel al-Akel, 30, who holds a degree in archaeology from Aleppo university.

Mohammad al-Hassan, 39, a dentist from Bara, also believes the IDPs should be left to live in Shinshrah.

“Human lives are a thousand times more valuable than stones,” he said. “I can’t see any reason why IDPs shouldn’t live on the archaeological sites. There is no better place for them to stay. I believe they’d be more than happy to move if the opposition built IDP camps.”

Others, however, want to protect historic sites from vandalism, like 25-year-old music student Abu Anas.

“Everyone is responsible for the destruction,” he said. “These archaeological sites belong to the public and not the regime. IDPs don’t have a right to vandalise them just because they have nowhere else to go. A committee for the preservation of these sites should be established to hold anyone responsible for vandalism accountable.”

A 44-year-old government employee who gave his name as Abu Ziad expressed a similar opinion.

“We are not going to drive [IDPs] out of Shinshrah but the destruction of this site… is a crime against all Syrians. It is the responsibility of us all to preserve it,” he said.

However, Abu Ahmad, the man displaced from Hish, refused to recognise Shinshrah’s value as an ancient site

“The history of this ancient village began a year ago when we were driven out of our villages and came to live here,” he said. “The Romans only lived here… we will rebuild it any way we want.”

Photo: Abdullah al-Sallum from the Media and Culture Bureau of Kfar Nabel