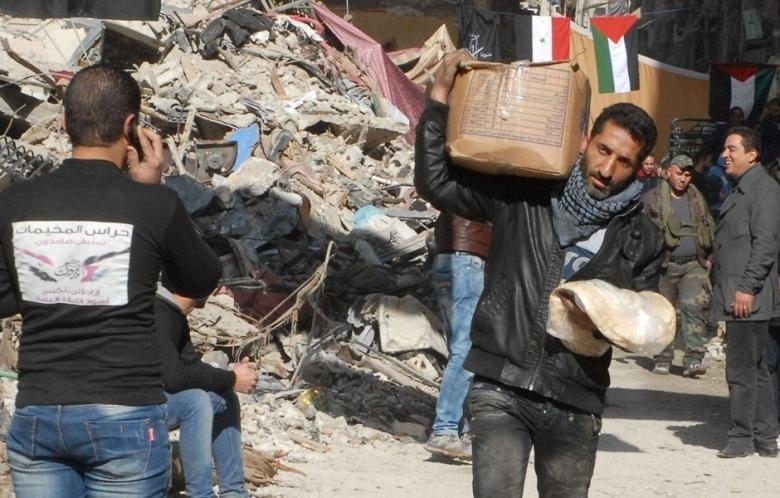 Damascus countryside: A video clip shot in the Yarmouk Palestinian refugee camp south of Damascus shows the shrouding of an old man who died of hunger. A young man in his prime and in good health appears in the clip standing in front of the emaciated corpse. Looking upset, he mutters “God sufficeth me! Most Excellent is He in whom I trust.” “This is the situation in the Yarmouk camp,” says Amr Shihab, a Palestinian humanitarian relief activist. “Behind the cameras that shoot those dying of starvation and behind the barricades of al-Nusra Front and Aknaf Bayt al-Maqdis Brigades, stand individuals that never knew the taste of hunger during this war.”

The same is true in the various regions of the Damascus countryside where living standards vary dramatically. Al-Nusra Front fighters come at the very top because they receive a lot of money from their organization allowing them to buy goods at exorbitant prices in the flashpoint areas of the Damascus countryside. “Five hundred thousand Syrian pounds (about $3,000) which is the price of a 50 Kilogram (110 lb) bag of rice in the Yarmouk camp means nothing to al-Nusra fighters. With their wealth they have no problem securing their own food and drink,” adds Shihab.

Next in rank come the fighters of Jaish al-Islam (affiliated with the Islamic Front) who are mainly based in Eastern Ghouta. They too are paid large sums of money from their leaders but not in all areas. The fighters who receive the most aid are the ones from Douma where their headquarters are located (because their military leader, Zahran Alloush, is from Douma). Sharif al-Nabulsi who is close to the Free Syrian Army tells Al-Akhbar that Jaish al-Islam fighters in areas that lie further away in Eastern Ghouta are paid less. He adds: “In the smaller towns in Eastern Ghouta, most of the local fighters joined Jaish al-Islam out of economic need after making deals that determined the aid they receive from the organization’s leadership.”

Civilians in rebel held areas come at the lowest end of the social ladder. The Free Syrian Army’s fighters are the “poorest and they often get their resources from theft while al-Nusra Front and Jaish al-Islam’s fighters refrain from stealing.” But the main reason, according to Nabulsi, is that the two other organizations “have no need to rob the poor as long as they receive large sums of money from abroad. This allows them to look down on those they have starved with false morals such as imposing hudud punishment (a punishment fixed in the Quran and hadith for crimes considered to be against the rights of God) on thieves.

It is commonplace for Jaish al-Islam and al-Nusra Front fighters to hold banquets during their meetings or on special occasions such as announcing a certain victory or establishing a new military group or merging with another group, “while hunger haunts the rest of the people only dozens of meters away from them.” A picture that was posted on social media sites shows Islamic Front fighters attending a banquet and fine dining in the Yarmouk camp at the height of the famine that struck the camp.

“Most of them stayed in their neighborhoods because they do not have the means to bear the burden of displacement.” The specter of famine is now threatening civilians in several areas in the Damascus countryside. While foodstuffs have disappeared in certain regions where they live and smuggled goods – that usually come to the “rich fighters living the high life” – are too expensive, their lives have become more like death. “Even the aid that the state tried to send in is seized upon by those who wield power in a given area,” according to an activist in the Syrian Red Crescent. There are two types of fighters that prevent food from getting to those in need. The first type consists of hungry fighters and the second type consists of fighters who profit from food smuggling.

Bringing aid to many areas and so called “aid” bestowed upon the hungry by charitable organizations “undercut the prices of the black market which prompted some businessmen to pay fighters working with them to thwart aid distribution operations.”

At the end of the day, the hungry – especially those who die from famine – become media fodder for the fighters. “Hundreds come out in their funerals and share their pictures on social networking sites after their death. But before they die, they do not give them as much as a sliver of bread.”