This year, it seems Syrians will not be able to watch World Cup matches from their homes. Some may even say that tensions between Damascus and Doha have spilled over to sports, with Qatar’s beIN SPORTS holding the exclusive rights to broadcast the games in the region 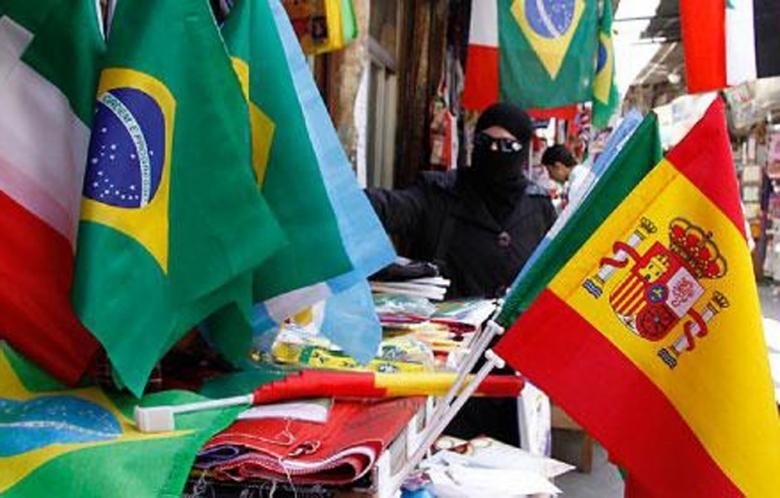 In al-Souwayqa, a souk specialized in selling satellite equipment, local shop owners failed to meet the demands of their football- crazed customers. Back in the day, retailers often came up with “creative” solutions to overcome the monopolization of broadcasting rights. They managed to decode the signals of channels broadcasting international football events, or used decoding dongles.

However, “this year, we are not sure if we can do any decoding. The Qatari channel spent a fortune to prevent hacking attempts,” said engineer Anas Youssefi, a local shop owner.

Speaking to Al-Akhbar, Youssefi added, “customers have been flocking [to our shops] asking for solutions so they can watch the games, but we haven’t given them any answer yet, because we need to make sure that we can do it.”

Here, most shop owners complained about the slow market. Meanwhile, Haj Salim Nassar, owner of the oldest satellite shop in al-Souwayqa, confirmed that decoding the signals was almost impossible. He explained that the Qatari channel rolled out special anti-hacking receivers with decoding cards, but “the quantity we have sold is negligible because the price of a single receiver with a card is 42,000 Syrian Liras (about US$ 280), more than two times the average salary of Syrian citizens.”

In the past, neighbors living at the same building pooled money together in order to buy a decoding card. But today, their prices have more than doubled, discouraging many citizens from resorting to this option.

Unlike previous World Cup tournaments, the flags of competing countries were not raised on rooftops and balconies this year. Apparently, people cheering for their favorite teams are embarrassed to get carried away by football and championships while their country remains in a state of war.

However, this does not means that Syrian football fans are being cut-off the international sporting event for the whole month. On the contrary, local cafes are gearing up to receive customers and are announcing special offers for the World Cup.

At a local café in Mazze Street in Damascus, the flags of Brazil, Russia, Algeria, Argentina and Iran were hoisted. “We don’t want the flags of countries conspiring against the Syrian people” said café owner Abu Jamil, a man in his fifties.

“If there is any other way to watch the games, then we won’t pay a single Lira to the Qataris,” Abu Jamil told Al-Akhbar, adding “we are waiting for any channel to announce that it will be broadcasting the tournament on Hot Bird satellite, then we will watch the games even if [the commentary] is in another language.”

In the meantime, some citizens and Syrian sports pages on social networks have been suggesting that local Dunya TV is planning to broadcast the games on its terrestrial channel while omitting the Qatari channel’s logo and without paying any dues

However, the TV station is yet to make an official statement about the issue, while legal experts have warned that this attempt will not be that easy, since Dunya TV would have to pay a huge fine that it cannot afford for breaching broadcast rights.

The booster: An alternative solution in border areas

Syrians in border areas may resort to signal boosters that were widespread in the 1990s and were used to pick up Lebanese channels like Future TV and later al-Manar.

“Residents of districts relatively close to Lebanon may use this machine to pick up the signals of Télé Liban which may broadcast the games,” engineer Adnan Hannawi told Al-Akhbar.

“This also applies to regions neighboring the Turkish borders,” he added.

Hannawi further explained that “if enhanced with just primitive means by al-Souwayqa retailers, this machine would cover a significant area, and residents of some regions in the capital would be able to watch the games from their homes and for a minimum cost.”