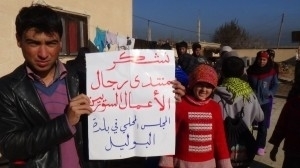 Attempts by the local council in al-Bouleil to engage young, independent activists have run into trouble, amid fears Islamist groups may extend their control to the area.

At the beginning of the fighting in Deir al-Zor governorate in 2012, the town of Bouleil, with a population of 25,000, welcomed about 10,000 internally displaced persons (IDPs) fleeing the battles.

Clashes in this area have continued since then, taking place just across the Euphrates from Al-Bouleil and pitting the Islamic State of Iraq and Syria (ISIS) against other factions such as the Islamic Front and al-Nusra Front.

The town received hundreds of families from nearby villages of Al-Dahla, Al-Sobha, Jadid Okaidat and Jadid Bakara, and the unelected local council has struggled to provide IDPs with basic necessities such as bread, water and housing.

With opposition activists beginning to complain about the situation, in May the municipality issued a call inviting them to apply for council membership to enable them to take part in reshaping the executive offices and making decisions.

Announcements were handed out on the streets or glued to the doors of mosques, calling for the widespread participation of young people in a large meeting on May 19, 2014.

However, the Body for Revolutionary Movement (BRM), the main block that makes up the local council, said that only two new activists applied to join the meeting, which was held on the planned date and with the participation of nearly 40 people.

The first items on the agenda were electing a president, vice-president and secretary, in addition to the appointment of heads and members of the council’s offices. Only the position of head of council was contested. One candidate ran against the chairman Ahmad al-Hial, who won the majority of votes and remained in office. At the end of the meeting, there were no changes in the structure of the local council and all its members kept their posts.

Council members and independent activists have traded accusations about the failure to revitalise the council.

Some activists said that the announcement did not reach everyone.

“This move seemed brave but in reality it was cautious,” said Mouayad, a 28-year-old activist. “The announcement did not mention the meeting’s location nor did it bear the council’s seal.”

Abu Maarouf, the head of the local council’s media office, responded by saying that the announcements were meant to reach the largest number of people possible, but the location of the meeting was concealed from the public for security reasons.

“Since the Prophet, peace be upon him, was discreet about critical matters then, given the circumstances, so should we; our area is in the range of the regime’s artillery,” said Abu Maarouf, emphasising at the same time that “the local council is willing to embrace everyone at any time.”

He subsequently added that, “being part of the local council, at least in the current circumstances, is a sacrifice and bears no gains. We accept advice and expose scandals”.

“There are difficulties that the local council cannot ignore and it made mistakes which caused it to lose popular support,” said Thaher.

BRM member Omar, 20, believes that as yet unengaged young people were reluctant to join the council out of fear that ISIS would expand its control in the eastern parts of Deir al-Zor province, where Al-Bouleil is situated.

In June, the al-Qaeda offshoot took control of vast areas in north-western Iraq and neighbouring areas of Syria, and in Bouleil, ISIS fighters held a checkpoint for a few hours on June 20 before retreating to the neighbouring town of Mohassen.

A statement attributed to ISIS that surfaced on social media on June 29 declared an Islamic caliphate in the areas under its control, and announced it was now to be known as the Islamic State.

“Local councils follow the Syrian National Coalition, all its members are seen as apostates from Islam by ISIS,” said Omar.