I was driving the car, feeling that my heartbeats were audible to the group commander, who was in the car beside me, so I hid my worry by playing with the car radio 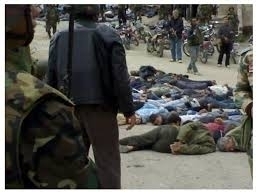 My name is Abu Algadhanfar. Gadhanfar is my youngest son, and I have two daughters, the eldest of whom is 16 years old. It is because I am so passionate about courage that I named my son Algadhanfar, one of the lion’s names.

I have worked as a driver in the Directorate of Technical Services in Latakia for 15 years. I love my career, so I feel my car’s pain as if it were one of my family members, and I’ve trained dozens of people in my village to drive a car. I am an Alawite and I perform all my religious rituals. My neighbor in the village is a former communist, and I have an excellent relationship with him. When he is absent from his home or I am absent from mine, I do not worry, because my neighbor will take care of all my children’s needs. I joke with him a lot and tell him that in his other life, after death, he will turn into a dog because he does not believe in God.

At the beginning of 2011, my neighbor was coming back to his home late at night, especially on Fridays. I knew that he was involved in the demonstrations but I did not tell anyone about it because I was afraid that if Security knew about him they would take him to jail. I sometimes advised him to take care of his family affairs and to stop what he was doing, but he ignored me, saying it was an illusion, and that he didn’t participate in anything.

In April of 2011, the Director General of the company held a meeting for us drivers and asked us to accompany the security services when they confronted the protesters. He told us, literally, that these protesters were a group of rabble and drug abusers who had their minds manipulated by outside parties to demonstrate as an imitation of what happened in the [other] Arab countries, and that their goal was to destabilize the security in which we live. So, we needed to support the security services, and our mission was simply to stand by the security members to give others an impression of large numbers.

We were surprised by the request, since this work wasn’t ours and we did not dare refuse. In fact, one Friday I was with civilian police and security agents in one of the city squares waiting for demonstrators to come out. At the time, the security agents were showing their weapons. Suddenly, a large gathering of people appeared shouting loudly with different slogans, and some of them were carrying sticks. So I said that I would go buy some cigarettes from a nearby shop, and sped toward an area without demonstrations, telling myself that it wasn’t my job to fight against them. In fact, I was scared. I came back home and I recounted to my friends in the village what had happened, without mentioning that I ran away.

Days passed, and we, the drivers, were surprised by a request for us to put our cars and ourselves under the orders of the security services. So we went out with them in raids if they had names [of people] to arrest, especially those they referred to as demonstration motivators or coordinators. So there was no real danger to us—the people who were arrested did not have weapons—until the day when a group of armed people occupied a number of villages near the resort Selma. At that time they asked us, the civilian drivers, to be present early in the morning in one of the security headquarters with our cars. The order was firm and they told us that anyone missing would be turned over to intelligence for interrogation and dismissed from the job—and the job was my only source of making a living.

I said goodbye to my wife and went to the branch in question, finding large numbers of security forces and army officials waiting with a convoy of cars. The forces were distributed to cars and mine, a double cabin pickup, was filled with heavily armed units with personal weapons. We set off towards the resort mountain of Selma. I was driving the car, feeling that my heartbeats were audible to the group commander, who was in the car beside me, so I hid my worry by playing with the car radio. Several kilometers after we passed the area of Alhafa, we took a secondary road towards the mountain, and were surprised by the halting of the convoy after a distance along this road. Showers of bullets came at the convoy. All the cars stopped because the front car was directly hit and the driver was killed—he was a civilian and my friend at work. The gunmen were occupying the high hills and had set up an ambush on this secondary road. Moments passed, and I was stunned behind the steering wheel, and didn’t know what I was doing. The voice of my car group commander came to my ears, saying, “Lie down, stupid.” His voice woke me out of my shock to find that everyone in the car had thrown himself on the ground to be safe from bullets.

I opened the car door and threw myself on the ground and I crawled toward the leader of the group and asked him what I should do. He looked at me and said, “We will wait for armed support forces, until then we will stay hiding.” A barrage of memories crossed my mind, I saw the images of my children, and I had a sense that I would not see them again. A wave of tears invaded me, followed by an outburst of loud laughter, and all those who were on the ground asked me to be silent. I approached the leader of the group and said, “I will run away.” I was surprised when he responded, “You are a civilian, do what suits you, I am a military man, death is better than escape.” He told me, “While retreating, do not walk in straight lines, and lie down every so often.” I took those words as an order to escape. I took my leave by running back, and heard nothing but the roar of the shots. I moved away from the convoy a sufficient distance, but continued to run for more than ten kilometers. I reached a village and asked someone to give me a ride to my village. He asked me for a large sum of money, and I did not object, I only wanted to go back and see my kids, because I thought for a moment that I would never see them again.

I arrived at the village square in the evening, surprised by a large gathering of people in front of my parents' house. I got out of the car and everyone was astonished to see me. The voices of people crying went up from my parents’ house, and they ran to me, still in disbelief, because they had been trying to contact me since the afternoon and I had not responded—I had forgot my phone in the car when I left it.  They had received the news that we were caught in an ambush, so they thought I was dead.  My mother, my wife, and my kids came out of the house, I embraced them and we were crying. All of them received me as a hero. I told them part of what happened without mentioning the story of my escape; I was afraid that the children of the village would laugh at my children and call them sons of the coward.

The next day we went out to the funerals of our friends. The wife of my friend the dead driver asked me to tell her about his last moments, so off the top of my head I composed some words to comfort her, saying that he had asked me to tell her to take care of their children, even though I did not see him when he died.

Now, still, we are forced toward confrontation, we are in the year 2014. But I will tell you a secret: I will continue to escape as long as I find a way to run. Say whatever you like about me—Abu Algadhanfar who, so far, is not satisfied with the duty of death. (Note that my Communist neighbor was arrested for a period of time. After his release, he fled Syria, so he is also a coward like me).